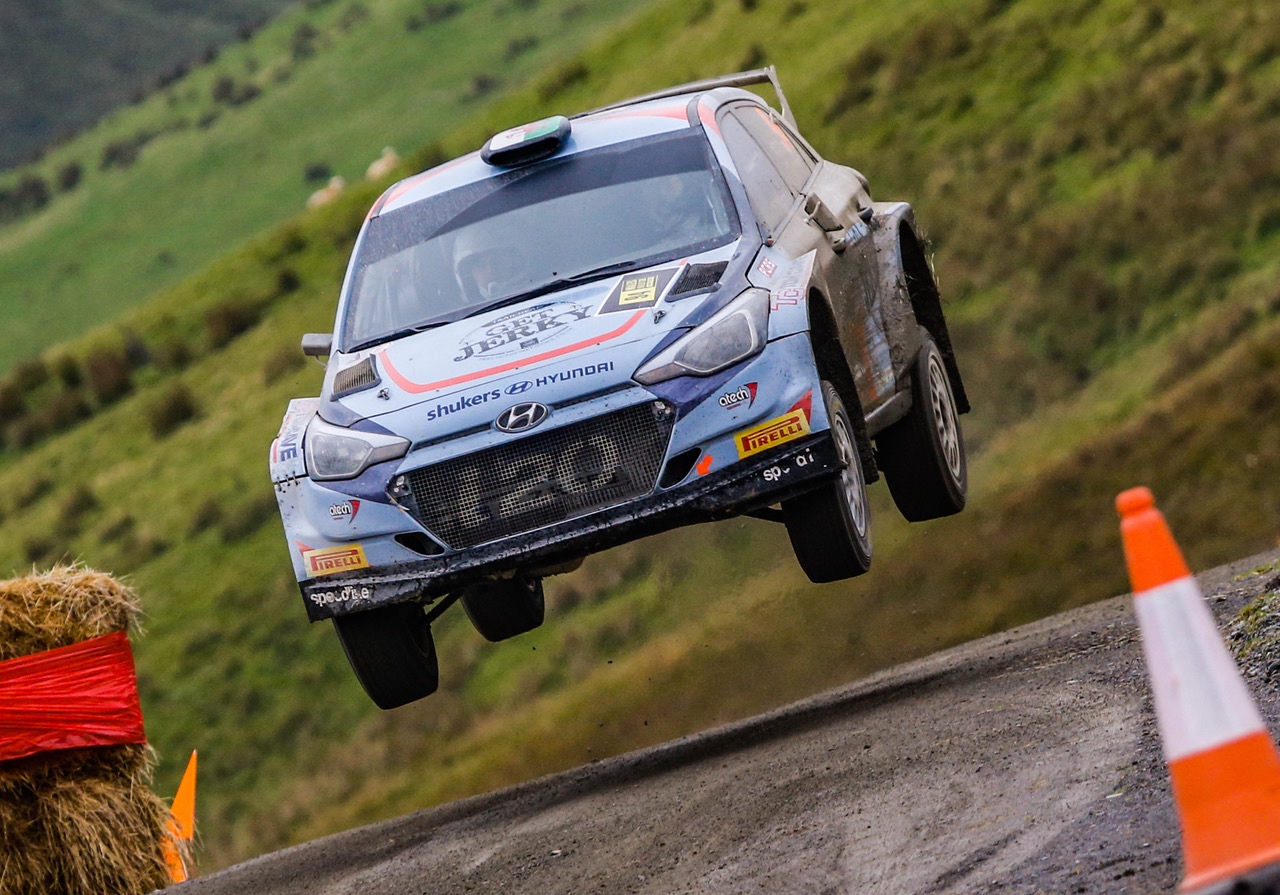 It wasn’t all plain sailing, as Cave lost time on Friday’s opening loop of forest stages when he noticed something amiss with his Hyundai i20 R5’s electronics that caused an issue with the launch control and anti-lag system. Add to this a fault with the wipers – not ideal in the wet conditions – he did exceptionally well to get back to service lying 20th overall and as the ninth R5 entry out of 28.

With the PCRS team returning the Hyundai to 100%, Cave was able to pick up the pace for the afternoon’s five stages – a re-run of the morning’s four plus the Slate Mountain spectator stage – and bit-by-bit he moved up the leaderboard to end the day 15th and sixth respectively.

The weather improved for Saturday morning’s three-stage loop in classic Rally GB mid-Wales territory. With the car, tyres and crew all set and raring to go, an impressive display of driving saw Cave battling with former World Rally Champion Petter Solberg in a VW Polo GTI R5, with Cave initially getting ahead before the Norwegian legend took back the place, albeit by a handful of seconds.

Although weather conditions worsened for the afternoon’s repeat run of the morning’s stages plus another spectator affair at Colwyn Bay in the evening, another fast and consistent performance enabled Cave to improve his position and when he pulled into the service area in Llandudno for the overnight halt, 13th overall, fourth in the R5 category and just 0.3 seconds from being the first privateer.

Albeit overcast and blustery, Sunday dawned without the accompaniment of rain. It was clear to see by their time through the first of the day’s first run in Alwen forest that Cave was fired up for a final-day push by claiming two places and in doing so, elevated himself to 11th overall and third of the R5 cars, behind the WRC 2 Pro world champion to be Kalle Rovenpera in a works Skoda and Solberg, who was now 12 seconds ahead.

The next stage in Brenig forest – which saw another well executed delivery by the Welsh pair – should have been followed by a run around the Great Orme, but the prevailing windy conditions and consequently no diver cover in the sea below the stage led to the stage being cancelled. Therefore, when Cave arrived for the mid-morning service, the timesheets showed they had held station.

With just two more stages left (a re-run of Alwen and Brenig) Cave pushed as hard as he could to see if he could edge into the top 10. However, everyone else pushed too and when he returned to Llandudno sea front for the finish, the results revealed he had consolidated his position of 11th overall and third in the R5 (RC2) category, as well as finishing first non-WRC registered entry, first privateer and top Welsh crew.

“I’m absolutely thrilled with this result,” said Cave. “To record my best ever result on a World Rally Championship round is just what I had hoped for, especially against such a high quality field of drivers in R5 cars.

“After a challenging start and having to cope with difficult conditions, Dale and I just kept up a consistent pace and from Friday afternoon onwards we knuckled down, fought our way up the leader board stage-by-stage and made sure we got the job done on Saturday so that we were where we wanted to be on Sunday and able to challenge for a top-ten overall position.

“I really have to thank everyone who made this event possible: For Dale and all the work he did inside the car and the PCRS team for all they did outside it. A truly fantastic job all-round. I also have to thank our sponsors and supporters for their invaluable contributions: Hyundai Motorsport Customer Racing, Pirelli tyres, Trailhead Fine Foods and their Get Jerky snack brand, Cambrian Training, Shukers Hyundai of Aberystwyth, Intervino personalised gifts, Go Fetch pet transport and Atech Racing. We couldn’t have done it without you!”