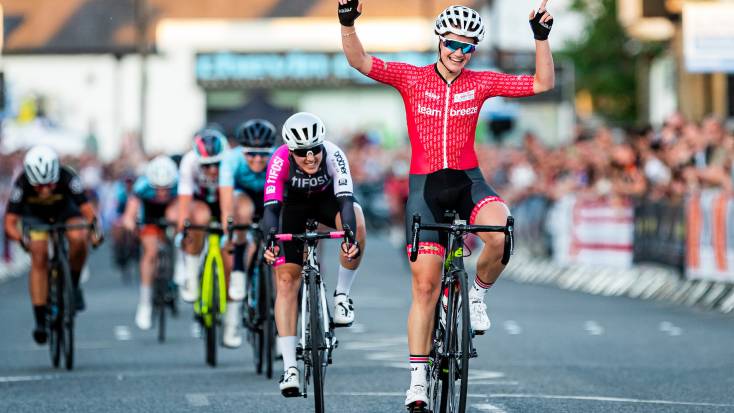 Jess Roberts could have a track outing at Newport. Pic: British Cycling

Jess Roberts capped an incredible week as she powered to victory in the Otley Grand Prix – just days after striking European Games gold in Minsk.

The Carmarthen-born rider was unable to defend her National Road Race title last weekend as she was competing for Team GB in Belarus.

Roberts won silver in the team pursuit with Megan Barker before teaming up with her fellow Welsh rider to take gold in the madison.

But the 20-year-old took the return to the road in her stride as she triumphed in the 15-lap town centre circuit race.

“Having just come back from the European Games on the track it was nice to get back on the road and get a win,” said Team Breeze rider Roberts.

“Minsk was a great event – I was gutted not to be at the national road championships, but getting the gold in Minsk made up for it!”

3rd at Otley GP tonight. Awesome atmosphere! Great to be leading the national circuit series as well with one round to go. pic.twitter.com/d9H7W6x6pq

Fellow Welsh riders Elizabeth Bennett and Manon Lloyd were third and  fifth in the same time as Roberts.