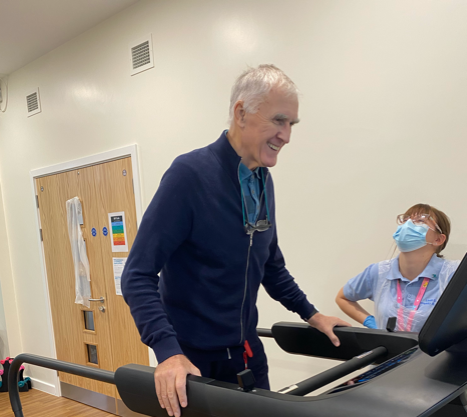 Former Wales International Dai Davies being put through his paces during a recent physio session at Nightingale House, Wrexham with Leah Evans.

Former Wales goalkeeper Dai Davies has revealed how physios have got him walking again after 10 weeks in hospital.

Davies – who made his name with Everton and Wrexham – has terminal pancreatic cancer and had been a patient at the Royal Liverpool Hospital for almost two months during the summer.

During that period he was unable to see family and loved-ones due to Covid-19 restrictions, but in August he was transferred to Nightingale House Hospice in Wrexham.

The move meant Davies – who won 52 caps for Wales in the 1970s  and 80s – could be reunited with his wife Judy, and his three children Gareth, Rhian and Bethan, whilst receiving palliative care and rehabilitation, following his decision not to opt for chemotherapy treatment.

The 72-year-old said: “I hadn’t been on my feet for ten weeks as I’d been lying down in hospital looking out of the window at a concrete wall.

“When I came to Nightingale House the brilliant physio team had me up and about very quickly. I’m no stranger to gyms but their powers of observation are excellent, as they will tell me when I’ve done enough for one session.

“There is such an air of peace and calm around the hospice and you can leave your worries behind you when you step inside. It was wonderful that I was able to have the option to come here as the choice gave me back control of my treatment.”

The hospice team facilitated Davies’s transportation from Liverpool to Wrexham and so began his palliative care journey to Nightingale House.

This wasn’t his first experience of hospice care as he had been a Bowen Technique mentor for lymphoedema nurse specialist Eilish Lund back in the early noughties, so he was familiar with the surroundings, although he admits it has transformed quite a bit since then.

He added: “There is such team work here – it is as if everybody working here is born to do the job; like their calling. Nightingale House is above and beyond what we expected, with exceptional food, facilities and gardens.

Born in Carmarthenshire, Davies played in the top flight for both Everton and Swansea and famously saved a penalty in a European Cup Winners’ Cup tie at Atletico Madrid having come out of retirement to play for Bangor City.

He later ran a natural health clinic in Llangollen and worked extensively as a pundit for Welsh language programmes on BBC Radio Cymru and S4C.