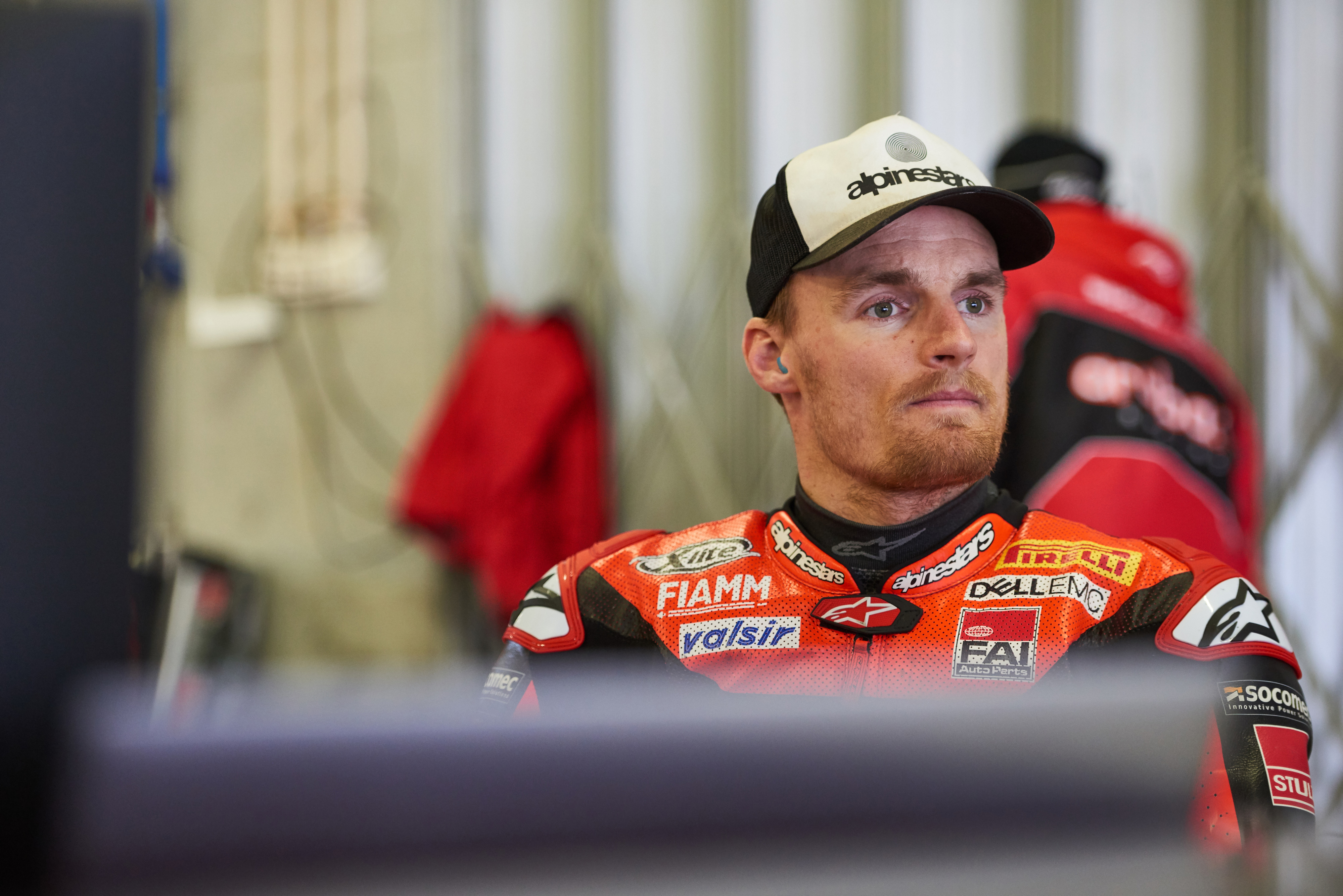 Chaz Davies has a lot to ponder as he looks for an eighth win in Aragon. Pics: Aruba.it Racing

Chaz Davies is hoping he can finally unlock the potential of his new bike as he bids to put a disappointing start to the World Superbikes season behind him in Spain.

The Knighton-born rider goes into the third round of the season at Motorland Aragon 11th in the standings with 18 points from the opening rounds in Australia and Thailand.

But that compares to new rookie team-mate Alvaro Bautista who has made a perfect start winning all six races so far including the two new shorter sprint races introduced this season to notch up 124 points already.

Davies is still trying to get the best out of the new Ducati Panigale V4 R bike but this weekend’s race is on a track where he has triumphed on seven occasions.

“I wouldn’t go as far as to say that the Aragón round – given my seven wins here – is a track where it’s all going to come together, because it’s not as simple as that,” admitted the 32-year-old.

“For sure it’s a track which on paper is better for me and this could help to mask some problems, but we still have to continue to work hard to find the best possible set-up.

“We did two days’ testing immediately after Buriram which was quite good, so now I’m going to Aragón to confirm the progress we’ve made so far and make another step forward because, as Alvaro continues to show, the potential of our bike is very high and it’s just up to us now to extract it.”

Davies was not helped going into the new season with pre-season testing hampered by injury as he tried to get used to the new bike following an operation on the shoulder he bust twice last year.

But nobody could have expected the impact made by ex-MotoGP rider Bautista who as well as the six wins has claimed one pole position and four fastest laps for the Aruba.it Racing rider.

Bautista will be making his Superbikes bow in front of his home fans and arrives with a 26 points lead over reigning four-time champion Jonathan Rea who is in the unusual position of playing catch-up on his Kawasaki.

The 34-year-old said: “After Thailand we had some time to rest before my home race and I’m looking forward to it because I want to enjoy my WSBK championship round with all the Spanish fans.

“I think that six wins in a row for sure has helped to make Superbikes in Spain more well-known and I’m happy because I feel I’m contributing to the growth of the championship, but this obviously means there are more expectations for my home round.

“Even though we did a positive test here, Aragón will be a new track for this bike, but as always I will try to be focussed. The target is exactly the same, we must work to get the bike as competitive as possible and then we will see what happens.”

*The MotorLand Aragón Circuit
The modern MotorLand Aragón facility had its roots firmly established with a solid history of street racing in Alcañiz, which hosted events between 1963 and 2003, but the need for greater safety led to the proposal and construction of a sporting complex dedicated to motorsport in the area. With the support of local institutions, renowned German architect Hermann Tilke was commissioned to design the facility. The circuit, which is 5.077 km long and has 17 turns, has always been a riders’ firm favourite ever since its first Superbike race here in 2011.