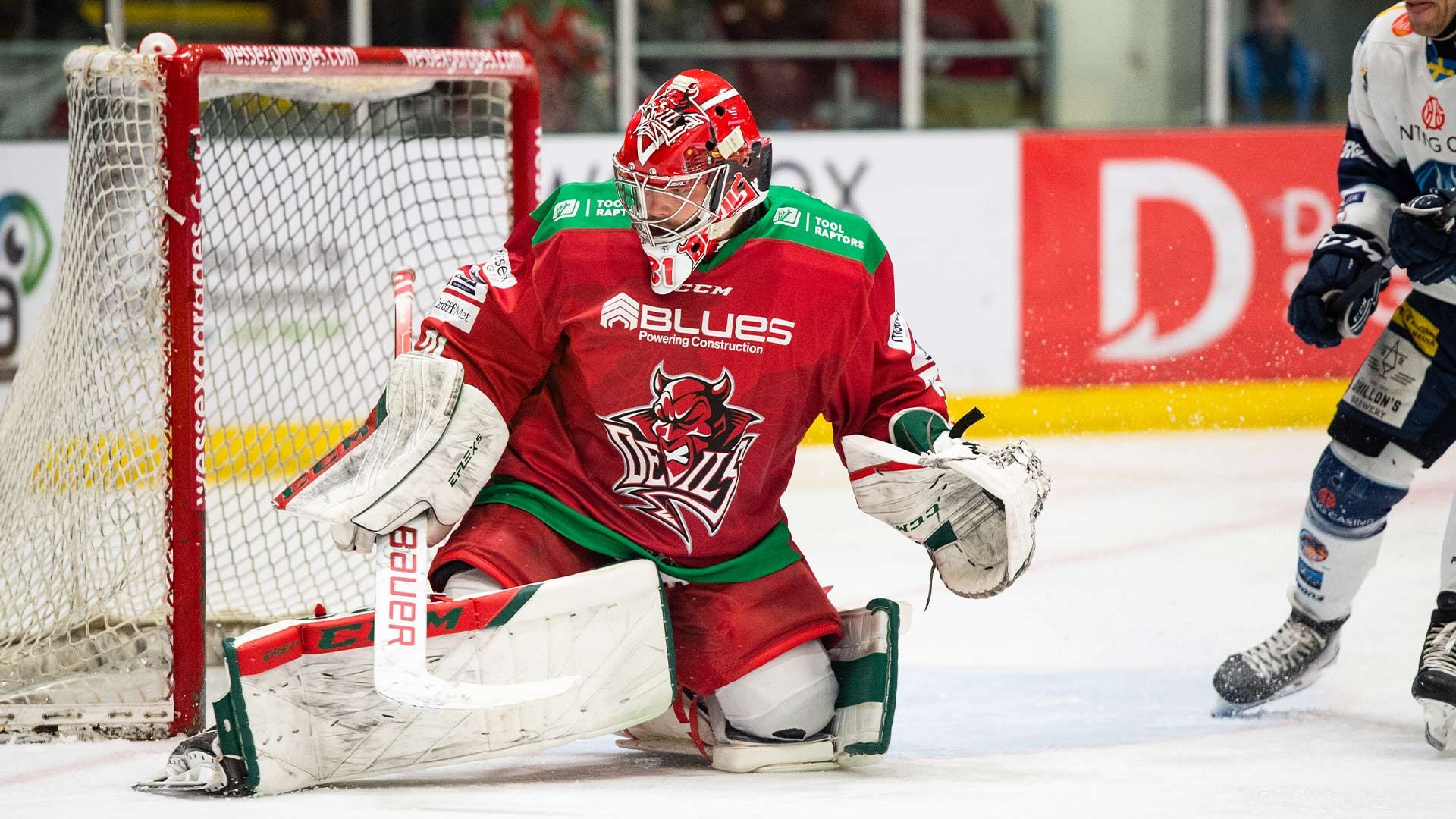 The Cardiff Devils are bracing themselves for a thrilling two-game series against the Guildford Flames, and will overtake the Elite League leaders if they can extend their current unbeaten streak.

Brodie Dupont’s team sit third in the table and can head into those games with optimal confidence as they finally start to shed their inconsistent tag that has threatened to undermine their season.

Despite an ongoing injury battle with key players sidelined, the Devils have been re-establishing themselves as an formidable EIHL outfit, posting a 9-0-1 record in their last 10 league games.

That run has propelled them into the title race with successive wins over the Coventry Blaze this week extended the Devils’ winning stretch to five games, putting them within touching distance of Guildford.

The following evening, Blake Thompson took just 19 seconds to put the Devils in front and despite being outshot 38-27, Cardiff refused to relinquish their lead as a 4-1 victory on home ice made it two wins from two against the Blaze.

The Flames enjoyed an 11-point lead over the Devils just two weeks ago, but two shock defeats over the festive period to Manchester Storm have seen Guildford’s lead wither away to just three points ahead of their visit to Cardiff Bay.

Sheffield Steelers have sat in second spot for much of the campaign and a prosperous sequence of wins of their own leaves them breathing right down Guildford’s neck, with just a point separating the two teams.

KOZUN LIGHTS UP DEVILS XMAS
The Devils recent return of results have been in no small part to the improving form of goaltender Taran Kozun.

The Canadian has established himself as the number one netminder through merit in recent weeks, earning himself the starting spot in each of the last four games.

Kozun’s run of starts culminated in arguably his best performance of the season, with a near flawless 37-save game earning him the Player of the Match award against Blaze on Tuesday night.

“It’s been a really good week for us,” he said, speaking immediately after that win.

“It’s a slow process throughout the year to get better and better after every game, and the defensive core and myself feel like we’re in sync.

“When I need some help for a block they’ve been big lately and when they’ve needed some help, I’ve been able to come up with some big saves so everything’s flowing together right now and it’s great to see.”

The 28-year-old also currently boasts a league-best 92.03 save percentage and seems certain to start the first game against Guildford, where he’ll be looking to add to his 8-3 win/loss record.

DECISIONS FOR DUPONT
Head coach Brodie Dupont has two extra players to fit into his line-up for this weekend’s series with the Flames.

Elite League leading goal scorer Cole Sanford is expected to return for the Devils this weekend after missing both games against Coventry. Josh Waller stepped up to the first-line in his absence and it was notable just how much the young winger thrived playing alongside Joey Martin and in particular, Trevor Cox.

Sanford’s return to availability, however, should mean Waller returns to his usual third-line role, but Dupont will no doubt be aware of the 23-year-old’s first-line potential as Sanford looks to add to his 21 goal tally.

Dupont must also consider where tough-guy Stefan Fournier slots in. The 30-year-old right-shot is the Devils second surprise signing this month, following the arrival of young depth forward Rory Herrman.

Fournier should add some much-needed physicality and grit to the Devils roster, and is tipped to make a big impression with 142 AHL appearances and an ECHL All-Star call-up behind him.

How exactly Dupont utilises the 6’4” power forward in his line-up remains to be seen, but Fournier can potentially become a key figure in the team’s drive for silverware in 2023.