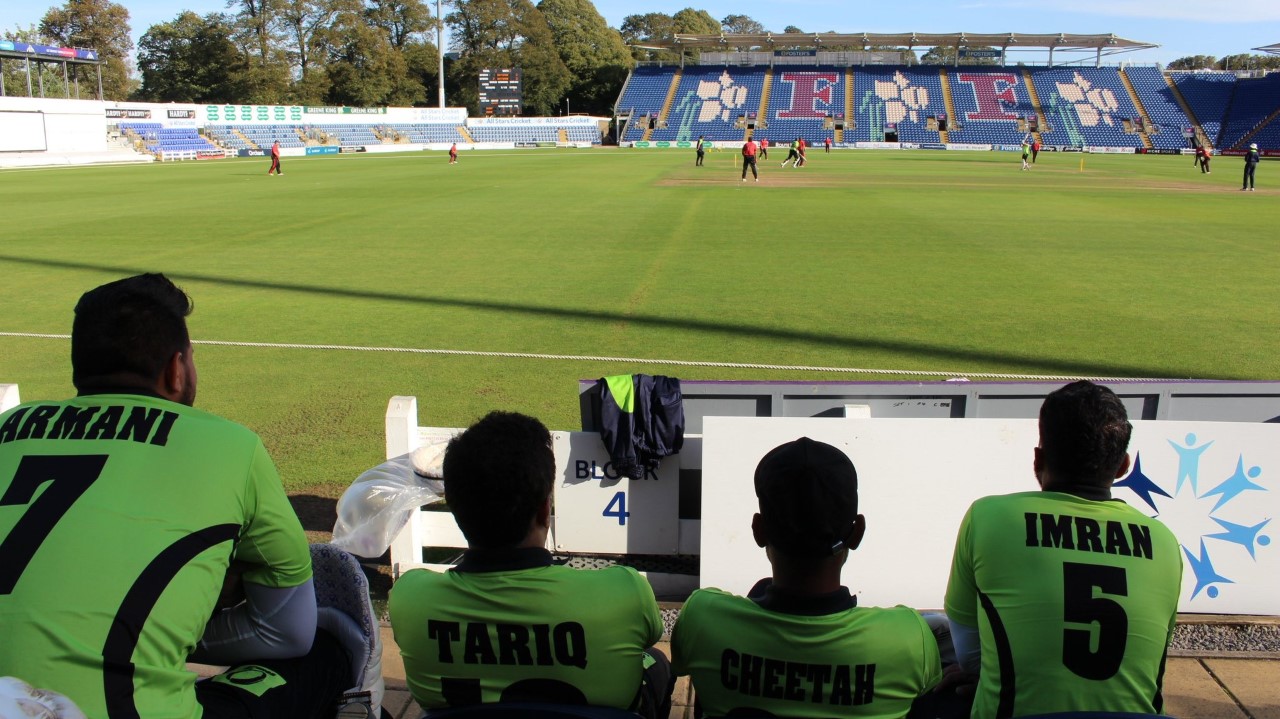 Cardiff Eagles players at the final of the Cohesion Cup.

The four World Cup ties may have been the biggest cricket matches played in Cardiff this year – but they were not the most significant.

The final of the Cardiff Community Cohesion Cup was played between Cardiff Eagles and a Glamorgan/South Wales Police XI, which included ex-Glamorgan professionals Ian Thomas, Mark Frost, Mark Wallace and Gareth Rees, who competed to regain the title that the select XI won the previous year.

Cardiff Eagles are a team which has come to together from Afghani, Pakistani and Indian Communities of Cardiff.

The purpose of the Cup is to use the power of sport to break down barriers.

The aim is to bring people together, reduce crime but more specifically knife crime, and benefit communities that need help.

The Cardiff Community Cohesion Cup was created for BME communities across Cardiff. It started in 2016 and culminates in a local final between two community teams at a local cricket venue and then the winners play the grand final, against the ex-Glamorgan players at Sophia Gardens.

The first Cohesion Cup took place in 2016 with a team from all different religious communities in Cardiff, playing a team of local police officers and ex-professionals. This then grew to eight teams in 2017, with 10 teams competing since 2018.

The Eagles won this year’s final by 27 runs in another close fought game, bringing the cricket season to a close.

Ali Saeed, the Cardiff Eagles captain, said: “It was a well organised event and competition. With the police being a part of it, this shows a different picture of policemen and policewomen.

“They were equally involved in the game, cheering for the players and enjoying the atmosphere.

“As a Cup winner, I enjoyed playing at Sophia Gardens. After each game, there was something to look forward too.  The organisation and facilitation in this competition were better than other league cups. We are looking forward to being a part of it next year.”

Mark Frost, community and development manager at Cricket Wales, says: “For the fourth consecutive year the partnership of the South Wales Police, Glamorgan and Cricket Wales have run a Cohesion Cup for the Cardiff area bringing communities and teams representing nine different communities across the City.

“This is the third time it has culminated in the winners visiting the Sophia Gardens Stadium.

“The event and competition’s purpose is to create more participation and, importantly, allow the community police officers the opportunity to meet and mingle with teams, develop connections, and listen to different elements of the community.

“We will be reviewing the competition in October with representatives from teams in order to make sure we grow the project and engage an even more diverse array of players, in particular to consider new formats with the advent of the ‘Hundred’.

“In line with other community events we would like to combine this with the Emergency Services Family Fun day if we can, so that the event becomes a big item in families’ calendars.”

The police also believe that the competition is fulfilling a much-needed role.

Inspector Judith Martin said: “South Wales Police have realised through other competitions, that the ethos of utilising sport to break down barriers enhances relationships with our local communities.

“The competition gave us the opportunity to engage with different cultural groups of our communities in an informal environment with the goal of building trust, confidence and communication.

“We are delighted that so many people representing their proud heritage and their city of choice Cardiff, have taken part in this Cohesion event.”

Had a brilliant time at the Cardiff Community Cricket Cup Grand Finale! The boys enjoyed watching Papa play for Glamorgan while Mama did some networking 😊 #community #cohesion #swpolice pic.twitter.com/V4YIcfZrEH

“The Community Cohesion event has not only strengthened our own relationship with BAME communities but also helped to bring different communities together creating and supporting a collective sense of cohesion.

“We look forward to planning the next event with Glamorgan Cricket Club who have been an integral part of maintaining this project.”

The competition organisers are looking to improve the Cup again next year and hope more teams will enter.