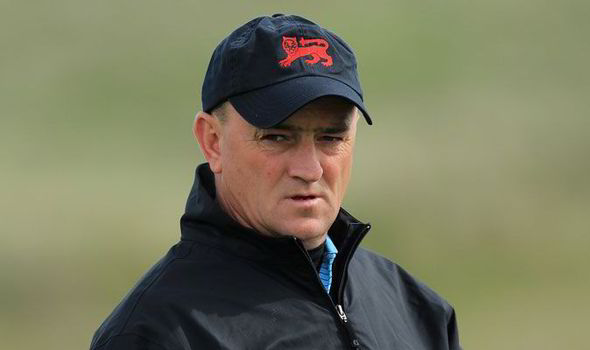 Nigel Edwards will be golf's Team Leader in Tokyo 2020.

Nigel Edwards has become the first Welshman to book his ticket to the 2020 Olympic Games in Tokyo.

The 50-year-old former World No 2 amateur golfer, who made history by captaining three successive British Walker Cup teams in 2015, has been announced as the Team Leader for the Team GB golf team in Japan next year when they will be aiming to repeat the gold medal triumph of Justin Rose in Rio 2016.

Edwards played in four successive Walker Cup matches between 2001 and 2007 and was twice on the winning side – at Ocean Forest in the USA in 2001, and at Ganton, Yorkshire, in 2003, where he holed the winning putt, was undefeated and the leading points scorer.

The only person in the modern era to captain three Walker Cup teams, leading winning sides in 2011 and 2015, he also played in three victorious GB&I teams in the St Andrews Trophy match against Continental Europe, captaining the team on three separate occasions.

He was part of two winning European teams in the Bonallack Trophy match against Asia-Pacific and his individual successes include winning both the South African Amateur and the European Nations Cup in 2006.

He will take up the voluntary role while continuing as the Performance Director of England Golf.

“I am absolutely over the moon and very honoured to be appointed as team leader as the Olympics offer a great opportunity to golf,” said Edwards.

“Justin Rose has been a fantastic champion and I’m very much looking forward to the challenges and opportunities that lie ahead.”

Since joining England Golf, where he oversees the coaching and development programmes, he has helped to produce numerous tour players and champions, including the Women’s British Open Champion, Georgia Hall.

Nick Pink, England Golf Chief Executive, said: “On behalf of ourselves, Scottish Golf, Wales Golf and The PGA, congratulations to Nigel and our very best wishes for Tokyo 2020.

“Nigel brings tremendous knowledge, experience and leadership skills to this role and I am sure he will be a huge asset to Team GB and to the golf team.”

A long-time member of Whitchurch Golf Club, Edwards was one of 27 Team Leaders announced by the British Olympic Association. There are six more to be selected.