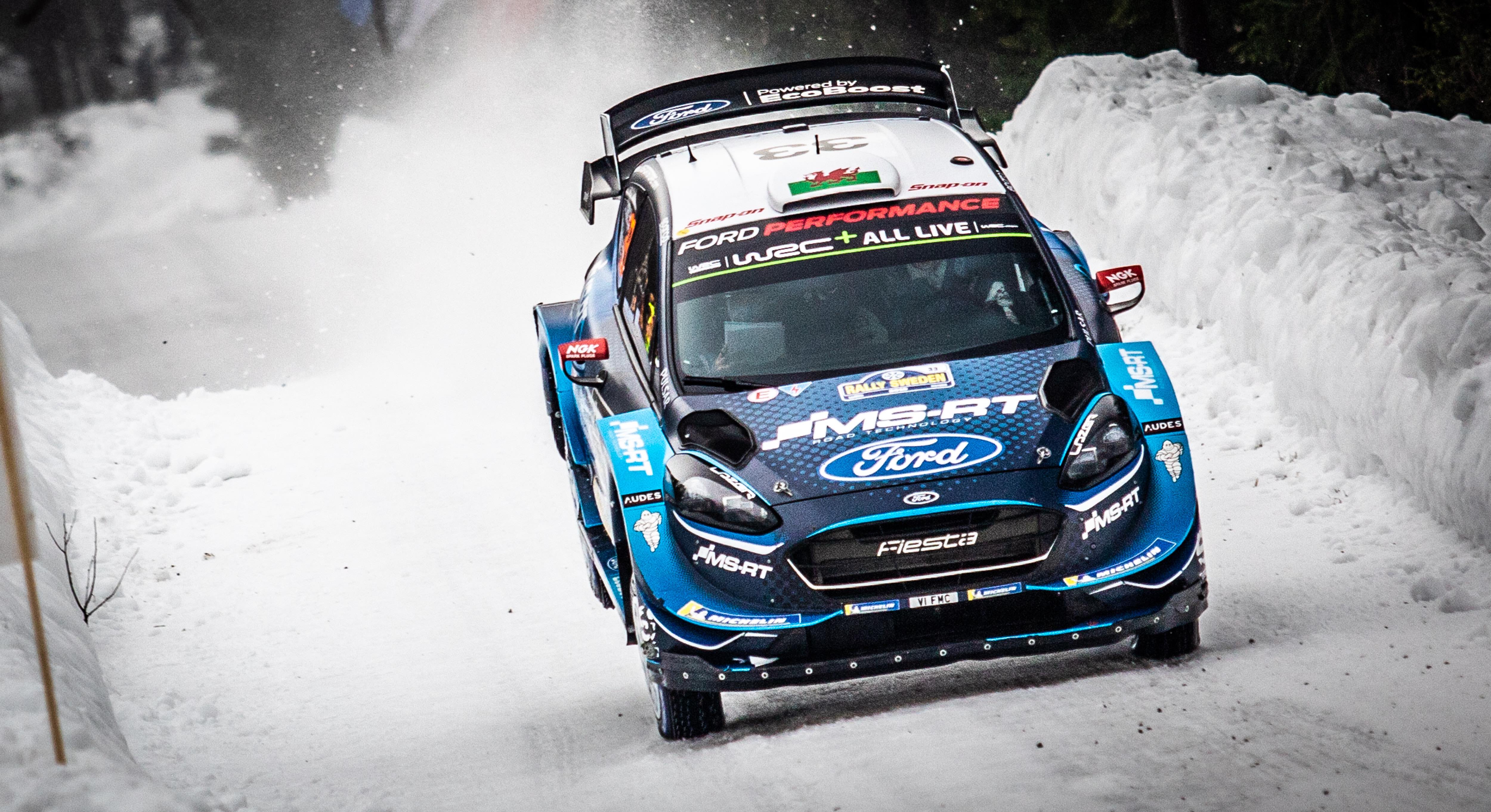 Elfyn Evans could be leading Rally Sweden tonight, yet he is still very much in contention for victory after a sensational drive saw him bounce back from 11th to 4th place on the opening leg of the FIA World Rally Championship’s only true winter rally.

A spin cost the 30-year old M-Sport team driver 30 seconds on the opening stage of the day (SS2), as tonight he trails the leader by 28.6 seconds.

After an unassuming start, whatever Evans had for lunch worked – as he flew through the afternoon’s four stages, setting fastest time on two of them to rocket his Fiesta WRC up the leaderboard.

Co-driven by Scott Martin, Evans is now within striking distance of team-mates Teemu Suninen/Marko Salminen, who lead a round of the WRC for the first time.

The changing conditions might have helped Evans, as the afternoon’s thaw turned the normally frozen snow-covered roads into something more akin to muddy Welsh forest tracks. It was still hazardous high-speed motoring, however – as six time world champions Sébastien Ogier/Julien Ingrassia discovered, as they slid their Citroen C3 WRC into a deep snowbank on SS6.

“We didn’t have the best of starts and it was a shame about the spin on the first stage of the morning [SS2],” said Evans.

“By the third stage [of the day, SS4] we had started to get into it and it went pretty well from there with two stage wins. The afternoon was really good and we moved up to fourth, so let’s see what we can do tomorrow.”

“Elfyn has shown great speed with a couple of stage wins,” said M-Sport Team Principal, Richard Millener. “It’s a shame he lost time this morning otherwise he would have been right there with Teemu!

“I think a few people may have discounted us even before this rally got underway, but we knew we had the car and the drivers to deliver a strong result. We’ve not stopped developing this car and we’ve not stopped believing in the potential of our young team.

“There’s still a long way to go and we know that the guys behind will be pushing hard, but we have every chance of delivering a really strong result this weekend.”

Hirwaun co-driver James Morgan is also flying the flag for Wales in Sweden this weekend. He is currently 25th overall and 12th in the WRC2 category, navigating for Rhys Yates in a Skoda Fabia R5.

Saturday is the longest day of the rally, with almost 80 miles of stages near Hagfors – with three long stages tackled twice, followed by a repeat of the Karlstad super special stage and a blast through the Torsby Sprint stage.