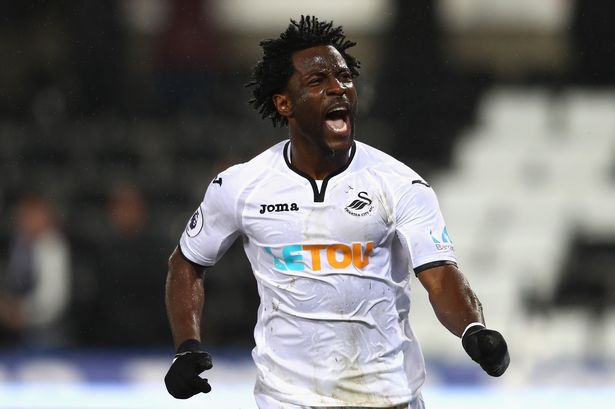 Graham Potter admits Wilfried Bony is determined to make up for lost time after finally being given the all-clear to resume playing for Swansea City.

The Ivory Coast strikes has been sidelined since February after damaging knee ligaments in a Premier League defeat by Leicester.

Bony had been linked with a move away in the summer and could yet depart the Liberty Stadium in the January transfer window to lessen the wage bill, but his immediate future could see a return to action at Bolton on Saturday.

“It’s a big boost – it was a big injury and it’s taken time but he’s worked hard, he’s back in the group and we can see his qualities,” said the Swansea manager.

“He has had a frustrating period of time and he wants to be out there and help the team. He thinks a lot about the club and had a big feeling for it.

Relegation was not something he would have wanted and he wants to contribute and help us win football matches and eventually get us back to where he would probably see us.”

The 29-year-old became a cult hero among the Swans faithful after netting 34 goals in 70 appearances in his first spell at the club before a £25m move to Manchester City in January 2015.

That’s where it all started to go wrong for Bony before he returned for £12m in August 2017 scoring three times in 18 games before suffering the period injury and unable to stop the Swans being relegated.

The 29-year-old’s return to fitness – and he could soon be joined by wing Jefferson Montego – is a boost to Potter’s strike options – even if it’s only to prove his fitness ahead of a January move which would take a hefty chunk out of the Swans wage-bill.

“Who knows what happens then,” added Potter. “I would like him to feel he is part of something and helping the team. You’re aware you have to keep players spinning but we will see what happens.”