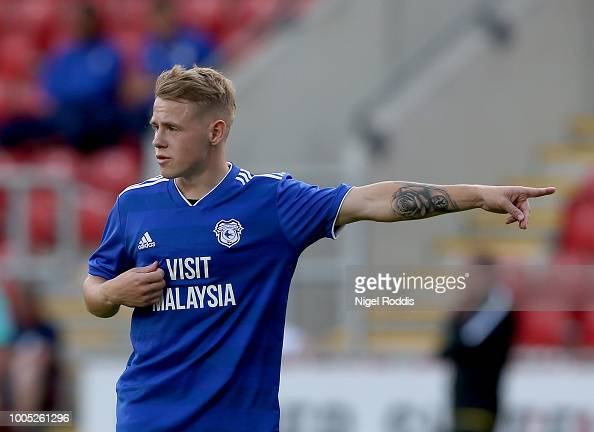 James Waite during the Pre-Season Friendly match between Rotherham United and Cardiff City at The New York Stadium on July 25, 2018 in Rotherham, England. Pic: Getty Images

James Rowberry has delved into the JD Cymru Premier League to uncover his latest signing at Newport County.

While Farquharson was an England beach football international, the 22-year-old Waite has won honours for Wales at U19 and U21 levels. He is well known to Rowberry from his time at Cardiff City.

Released by the Bluebirds last year, he joined Penybont in the summer and has scored 10 goals in 21 appearances for them to date this season. He heads to Rodney Parade, and back into the Football League, on an 18-month deal.

“I’ve known James since he was 13, when I worked with him at Cardiff for eight years. He’s a local lad who knows what it means to play for our club,” said Rowberry.

“He’ll add value and excitement to our attacking areas of the pitch. I’m delighted to welcome him to the club.”

Waite was one of three signings made by Penybont at the start of last summer’s transfer window, joining Josh Graham and Ryan Reynolds. He had previously been on loan at League of Ireland outfit Waterford, making 12 appearances for them.

Prior to making the move to Ireland, he had two separate loan spells at Weston-super-Mare, where he scored 12 goals in 27 outings. He made one senior appearance for Cardiff, a 3-0 defeat to Luton Town in August 2019.

He won two caps for the Wales U21 team lat year in the European U21 Championships, facing Belgium and Bosnia & Herzegovinia. He also won a cap at U19 level in 2018.

Waite’s signing comes hot on the heels of Rowbery picking up defender Josh Pask from Coventry City. He officially became the first signing by the new manager and has joined on loan to the end of the season.

Newport County are to announce that is signing number ✌️of the January Transfer Window, penning an 18-month deal with #NCAFC#WallpaperWednesday https://t.co/r1SxT4cwfg pic.twitter.com/u7qQCEg6NM

Pask came through the ranks at West Ham United as a youngster. The now 24-year-old then had loan spells at Dagenham and Redbridge and Gillingham before signing for Coventry in 2019

He has made 17 appearances for the Sky Blues in the Championship last season having helped them gain promotion from League One the previous season. The 24-year-old centre back came through the ranks at West Ham and had loan spells at Dagenham and Redbridge and Gillingham, where he got experience of League Two and League One football.

He signed for Coventry in 2019 and was part of the side that gained promotion from League One that season.

“When my agent told me that Newport were interested I was interested from the start. I’m looking to come out and play and it seems like a great club to play for,” said Pask.

“The manager seems really eager to get the ball down and playing. Hopefully, we can get ourselves in a good position for the end of the season.”

Meanwhile, Newport’s teenage striker Lewys Twamley has gone out on loan to Salisbury until the end of the season. He will play in the Southern Premier League.