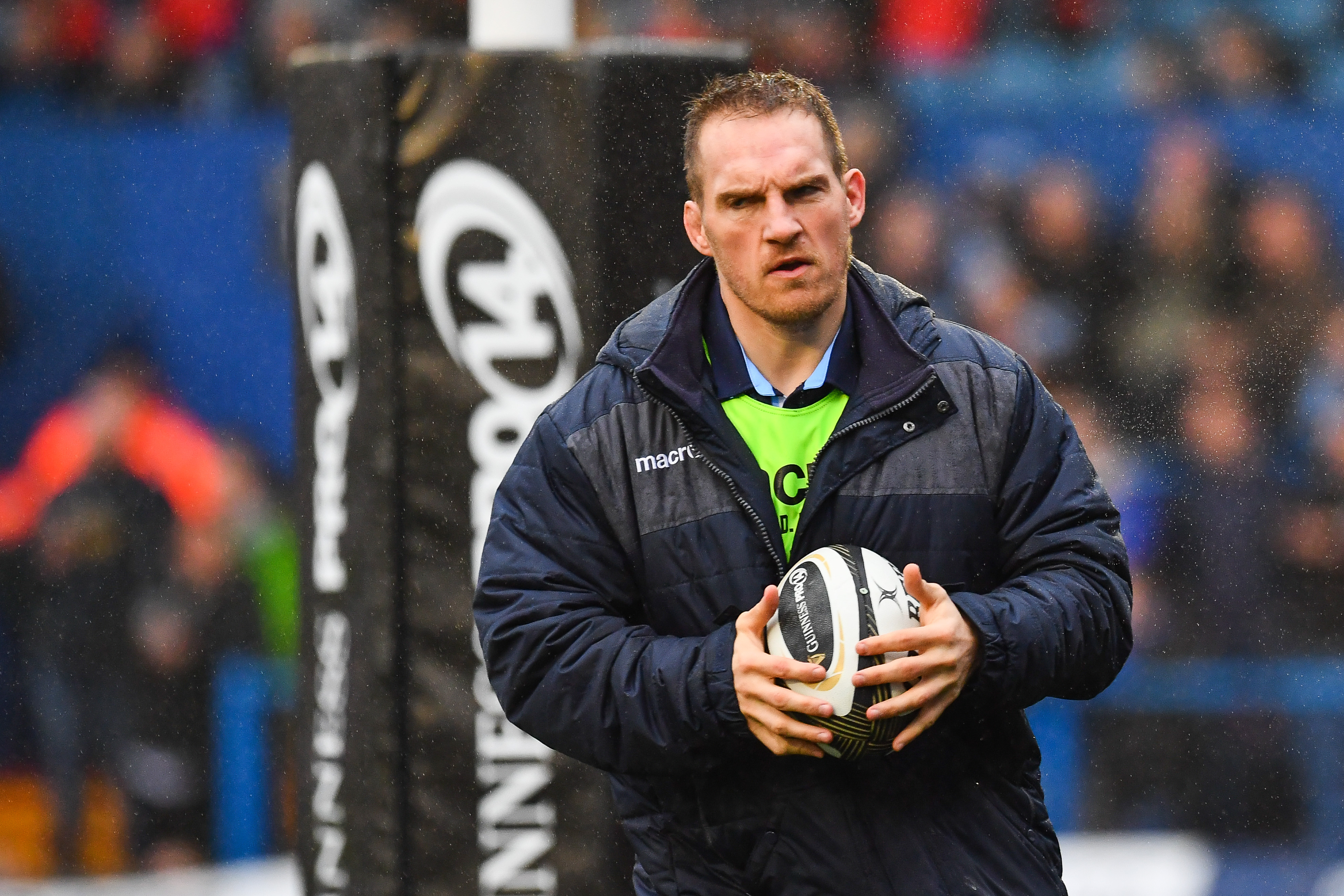 Gethin Jenkins of Cardiff Blues during the pre-match warm up ahead of his last game. Pic: Craig Thomas/Replay Images

After 18 years as a professional rugby player, 16 of them playing for Wales, Gethin Jenkins, has pulled off the strapping for the final time. Graham Thomas considers the Cardiff Blues’ prop’s long career . . . and his new one.

He went out like he came in – narrow-eyed and unsmiling.

There was a brief grin when he slapped a boot at a conversion kick that sailed well wide, and again when he navigated along a guard of honour, but otherwise it was the same old Gethin Jenkins, all fixed stare and as inscrutable as a poker player with a half-decent hand.

The warrior prop – with knees now as dodgy as his infamous calf muscles – bowed out on Sunday, with little fuss, only a few words and certainly no bitterness towards a sport that has rewarded him well for the price of pain so acute he can hardly bend 24 hours after playing.

Just over 20 minutes off the bench for the Cardiff Blues at home to Zebre was enough to mark the end of one of the great playing careers in Welsh rugby history – the greatest if your only measure is longevity and number of caps.

No-one else can match his 129 games for Wales, 134 Test appearances when you add in the Lions, and of the teammates alongside him when he made his Wales debut back in 2002, there is no-one else still playing and hasn’t been since Dwayne Peel packed up four years ago.

Not a bad return for a prop, who – a fellow international only half-joked about this week – didn’t really like scrummaging.

But he did enjoy tackling, and he loved outfoxing back rowers to win ball on the ground, and having more energy than any other front rower on the field, and try-scoring – that was good fun, too.

None of it though was done with a smile, at least not in public, and interviews always looked as if they were far more trouble to him than they were worth.

“It was a strange feeling,” he said after the final, final whstle. “I was only on for five minutes and I felt I could do another four years. But, then the feeling in my lungs kicked in and it was a fast game.

“I was gutted to miss the kick at the end, but it’s the end of an era. I’ve enjoyed myself and they’re a great bunch of boys here, but I’m looking forward to being on the other side now.

“All good things must come to an end, but it was important to me to get back out there after working so hard to get fit.”

And with that he was gone, not very far, though in the longer term. The triple Grand Slam winner is moving into coaching and as he approaches his 38th birthday it seems like a shrewd move.

If single-mindedness and a refusal to yield are useful attributes for a prop, there may have to be some adjustments when it comes to harnessing the strengths of different individuals.

Jenkins’ midweek press briefing after announcing his retirement on Wednesday was illuminating on the few topics he was willing to discuss – much less so on the long list he wasn’t, which included player safety or Wales’ relative lack of success against the southern hemisphere nations.

Dai Young, another prop who was familiar with scrummaging at the Arms Park, ended his playing career for Wales the year before Jenkins played his first Test.

Since then, he’s managed to stay at the top of that second profession for 16 years and counting, a measure of his ability to adapt, to accept the best of the new school, but retain the valuable stuff from the old.

His knees may creak, too, but he has flexibility in other aspects that served him well coaching at the Blues and now with Wasps.

Jenkins is popular with other players, especially those who enjoyed to caricature “Melon” as the grumpy old man of the dressing room. Blues coach John Mulvihill revealed Jenkins didn’t say much before their bonus-point 37-0 win, but that was never his thing anyway and it will be interesting to see how he adapts to communicate his ideas on the training field, and to representing the Blues off it.

What is unquestionable, though, is the experience and wisdom he has to offer if he finds a way to channel it.

Those three Grand Slams, four Six Nations titles, a spell with Toulon in France that included a European Champions Cup winners’ medal, 195 games for the Blues, a Challenge Cup title, as well as days spent learning his craft with Pontypridd.

He even played for the long ago disbanded Celtic Warriors, the only thing still ticking from those days apart from former benefactor Leighton Samuel’s large watch.

It will be a hard act to follow – both for him and anyone else.