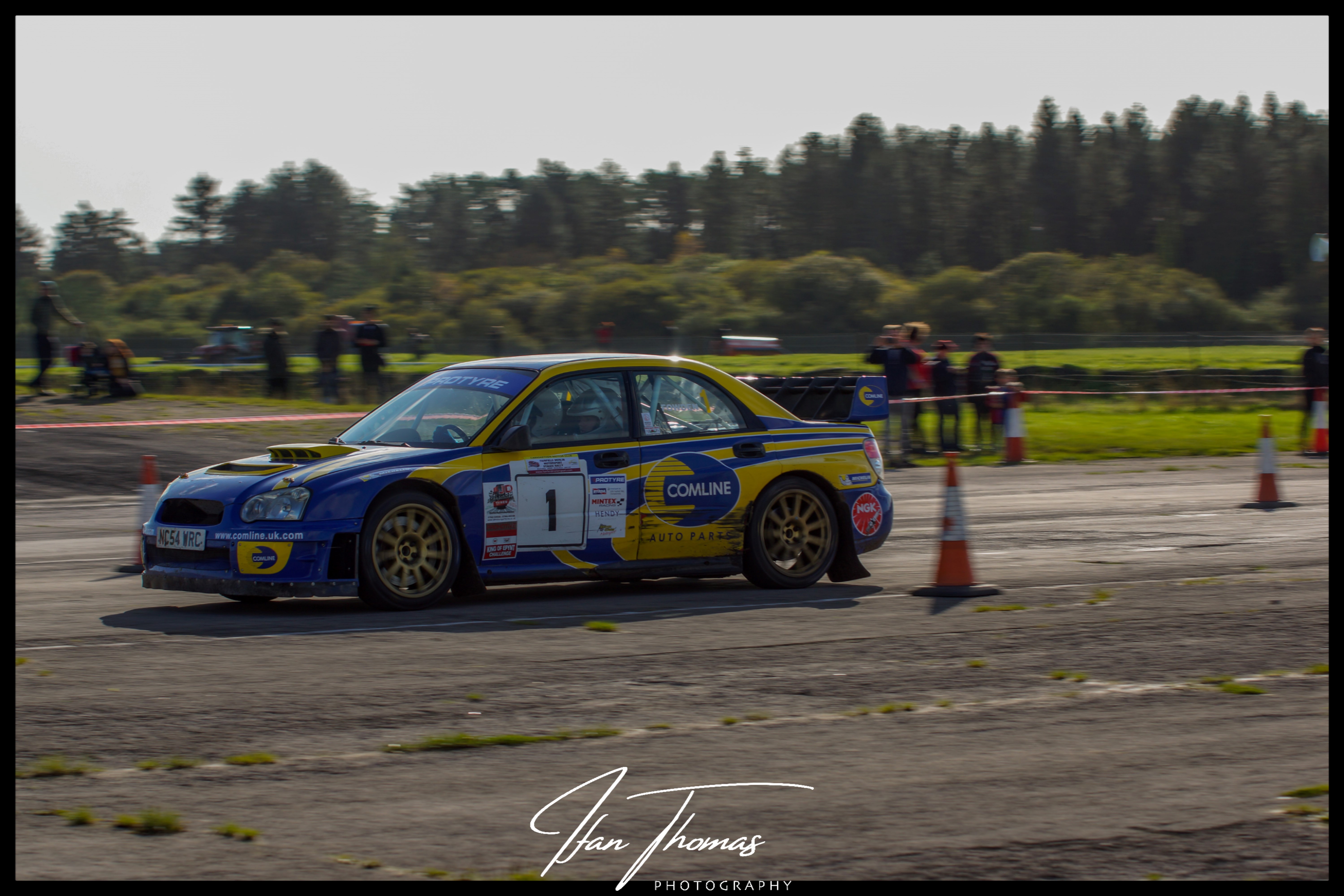 Bob Fowden was on winning form again at Pembrey. Pic by Ifan Thomas.

By Paul Evans and Simon Gronow

Bob Fowden won the Fairfield Merlin Stages Rally on Sunday, but it was far from a stroll in the park as the Llanelli ace had to overcome a number of issues and a stern challenge to secure victory on the Carmarthen Motor Club organised event.

Fowden very nearly didn’t make the start, as a problem with the shift system on his Comline Auto Parts/NGK-backed Subaru Impreza WRC S11 left the car with no gears.

But that was fixed and Fowden, co-driven by his grandson Matius, set equal fastest time on the first special stage before being fastest on all of the remaining four tests to win the event by 26 seconds.

“We have now completed five events in the car after all the time and effort repairing last year’s Isle of Man fire damage, and its back to full spec,” said Fowden. “The Fairfield Merlin first place with my grandson went well, our only problem once the event started was a slide off the Beach Road on the manure. That cost about twelve seconds, and catching another car on the last stage a few more, but it was an encouraging win.”

After equalling Fowden on the opening stage, Nigel Jones/Tracy Davies in another Subaru Impreza WRC were only a handful of seconds off the lead after stage three. Unfortunately, switching to harder compound tyres for stage four didn’t pay off and they lost 18 seconds to Fowden. With more suitable tyres for the final stage, Jones was just three seconds slower than Fowden on the final run and was pleased to come home in a fine second place overall on his local event.

It was a drama-free day for Phil Turner/Simon Anthony, who finished in a comfortable third place in their Mitsubishi Lancer Evo 9, ahead of the leading two-wheel drive runners.

Reigning JD Tyres Welsh Tarmacadam Rally Champions Richard Merriman/Kath Curzon came into the event leading the 2019 series, but over the first two stages their title and class rivals Llyr Jones/Sion Jones opened up a 15 second advantage over the Darrian crew, as they went well in the slippery conditions in their Ford Escort Mk2. The later drier stages proved to be more to Merriman’s liking as he overtook Jones for fourth place and the class lead on stage four, before rounding off the day to extend his Championship lead.

Rob Dennis was driving a new Subaru Impreza for the first time, and was suffering some teething problems, as jamming brakes and gear linkage issues slowed him and co-driver Rhys Stoneman, but once these were fixed their times improved and they moved up to sixth placed at the finish.

Another crew debuting a new car were James Munden/Dale Lovegreen who drove their Ford Escort Mk2 for the first time on the morning of the event. After power steering issues were resolved, Munden was delighted with his new car as he got into a good battle for the Class 5 win with Nathan Jones/Tim Murphy in a similar car, with just one second in Munden’s favour separating them at the finish.

There was a good ninth place finish for Jaryan Lewis/Owain Price in their Vauxhall Chevette as Darren James/Ryan Jones rounded off the top ten in their Mitsubishi Lancer Evo 6 after a problem free run.

Ioan Lloyd won the Formula 1000 Championship category, turning a two second deficit into a two second win after a stunning run on the final stage. Co-driven by Jonathan Jackson, the Llandysul teenager would have finished 20th overall in the main event, after a great performance in his West Wales Rally Spares-backed Citroën C1.

Ian Kenvin/Phil Williams didn’t start owing to an engine problem with their Ford Escort Mk2, Eurwyn Wiggy Davies/Gareth Davies were forced out with a broke drivershaft on their Darrian T9 on SS3, Malcolm Tar Jones/Rhys Jones retired their Peugeot 206 GTi with electrical problems on SS4 and John Warner/Scot Warner stopped on the same stage when the head gasket blew on their Peugeot 205 Rallye.