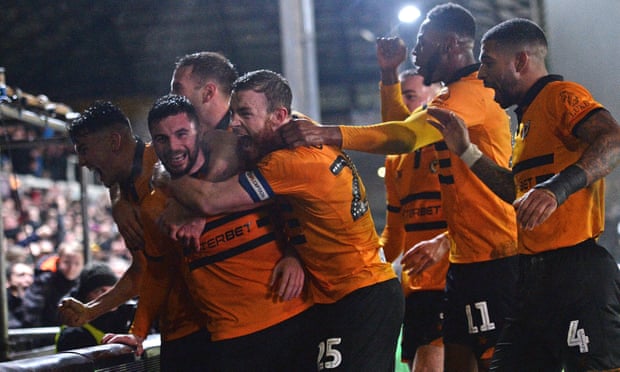 Padraig Amond is engulfed by his team-mates after scoring. Pic: Gettys Images

Irish goals ace Padraig Amond is aiming to complete a half century for Newport County this evening and lead them back to Wembley Stadium.

Amond, from Carlow in the Republic of Ireland, goes into County’s Leasing.Com Trophy semi-final against Salford City at Rodney Parade having scored 49 goals for the Welsh club.

A victory tonight would take Newport back to Wembley – and Portsmouth, 3-2 winners against Exeter City last night, are awaiting the winners.

“It would be brilliant to hit the 50 mark, but again, whoever scores and gets us to Wembley it doesn’t matter,” said Amond.

“It’s probably not going to be the prettiest of games with the weather forecast and the pitch taking a bit of a battering.

“Fair play to the ground staff, they’ve done a remarkable job to keep the pitch in as good a condition as they can.

“You dream of winning trophies at Wembley and this is a great chance to win one.”

They have made remarkable progress one and off the pitch and David Beckham joined his fellow United pals in 2019.

“When I was in Manchester I lived about half a mile from Salford’s ground and saw what it was like seven years ago before they took over,” says Amond.

.@NewportCounty manager Michael Flynn is hoping to lead his team out at Wembley for the second time in as many years, this time in the Final of the https://t.co/bGBrGYcKza Trophy.#EFL | #EveryGameMattershttps://t.co/OwUip2k2VY

“What they’ve done for the community around there is fantastic.”

More than 3,000 spectators will be at Rodney Parade this evening and Newport-born County manager Michael Flynn says: “If you lead your home-town club out as a manager at Wembley then there’s obviously a huge amount of pride and excitement.

“Last time it was a special occasion. Hopefully we can earn another one.”

Salford City played at Wembley last season in the National League play-off final and Flynn says: “We’re playing against a team in our league and it’s a chance of getting into a final. We’ll give it our best shot.”

Leasing.com Trophy holders Portsmouth won 3-2 against Exeter in their semi-final, recovering from 2-1 down at Fratton Park.

John Marquis headed the winner after 96 minutes just when it seemed a penalty shootout would decide the issue.

All five goals in the tie were scored after the 78th minute, with Exeter twice taking the lead twice before being pegged back.