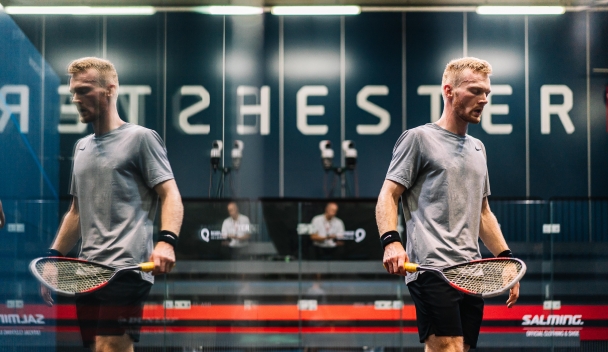 Joel Makin produced gutsy display but was just edged out by Momen.

Joel Makin has reached the quarter-finals of the PSA World Tour Manchester Open without dropping a set.

Makin had seen off England’s Tom Richards 3-0 in his first round match on Wednesday as he returned to the court for the first time in six months.

“That is two 3-0 results against two top 30 players. Considering the time we have had out, I feel good,” said Wales’ No 8 seed.

But it is set to get tougher for Makin who will face World No.1 and top seed Mohamed ElShorbagy in the last eight.

Tesni Evans will be back in action on Saturday in a second-round encounter against England’s No 9 seed Alison Waters.

The No 7 seed from Rhyl had battled for an hour to beat Zeina Mickawy of Egypt 3-2 on Thursday.

That was Evans’ first game for eight months having been ruled out by an ankle injury before COVID-19 saw the squash season suspended.