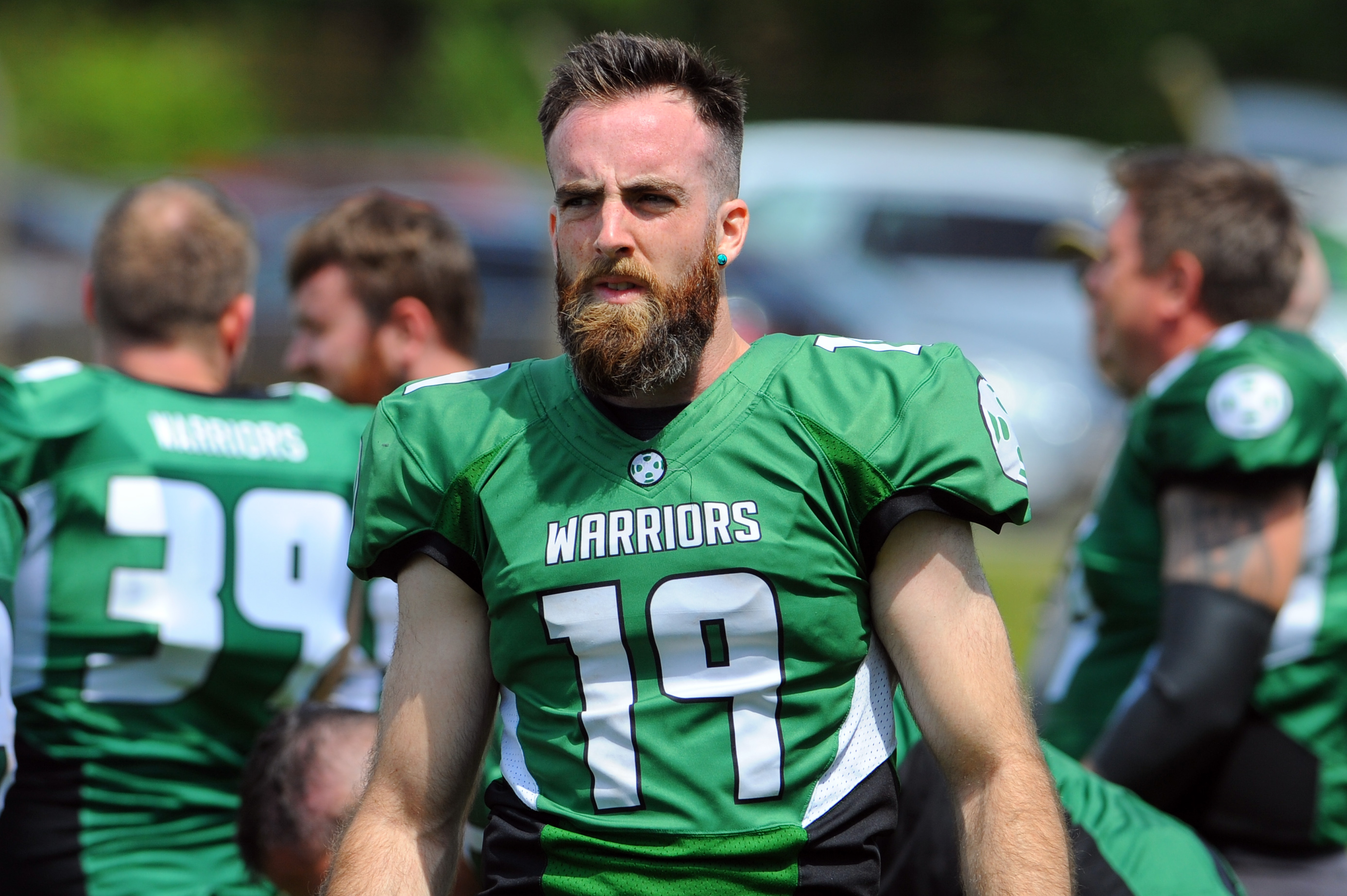 The film and television industry brought Mick Duncan to south Wales now the Irishman is set to be cast in a leading role in American Football’s Britbowl, writes Twm Owen

Championships are by definition special occasions and for South Wales Warrior Mick Duncan this weekend’s British American Football Britbowl XXXIII final is the second such highpoint in a month.

While the unbeaten Warriors had been making their way to the Southern Conference final of Division Two of the British American Football Association (BAFA) National League, across the Irish Sea, Duncan’s former team the South Dublin Panthers reached Irish American football’s showpiece final, the Shamrock Bowl, for the first time.

Though the Panthers were defeated 24-10 by Irish powerhouses the Belfast Trojans reaching Shamrock Bowl XXXIII was an achievement all connected with the club could take pride in including their former player now representing the only Welsh side in the BAFA league.

“I did feel a part of it as I had been a part of that club from when it first started and it is like family,” said Duncan who lasted kited up for the Dubliners in 2017.

“I’ve always been involved and when I’m home I train with the boys and I couldn’t be happier for them.”

The Irishman has been a permanent resident in south Wales since March 2018, after spending a year back in his homeland, and works as a boom operator in film and television, currently responsible for sound on the set of the Netflix series Sex Education, filmed in Caerleon, near Newport.

The TV soundman has also been making a big noise on the gridiron as a wide receiver and kicker with his adopted Welsh club. On the first Sunday in August, the day his former teammates were playing in the Shamrock Bowl, Duncan kicked five extra points, and ran in one two-point conversion, for the Warriors who routed the Cornish Sharks 51-0 to secure home-field advantage for the play-offs.

That advantage helped the Warriors to victories over the Bristol Apache, 28-3, and a 16-6 semi-final victory over the London Blitz B which not only advanced the team to this Saturday’s, August 31 final in London against the Bournemouth Bobcats but secured promotion to British gridiron’s middle tier.

With promotion achieved the Warriors are looking forward to enjoying the team’s first final since winning the Division Two championship in 2011 at Crystal Palace and are taking a coachload of supporters from south Wales to London.

This year’s final will be played at the less prestigious New River Stadium, White Hart Lane, but is a part of weekend of finals and precedes the Division One final with the Premiership showpiece played the following day.

“I love American Football so much and this will be our first final with each other,” said Duncan: “Medals don’t really matter but it would be nice to look back and have a token of something we’ve achieved.”

Duncan first played with the Warriors in 2016, when the Llanharan-based club played in Britain’s top tier Premiership, but for the last two summers the only Welsh side in the national league has languished in the bottom tier making the climb back up the divisions an emotional one, perhaps worthy of a stream on demand mini-series.

Duncan caught a vital touchdown pass to put the Warriors ahead in their semi-final victory and also kicked two conversions against the Blitz B. As the team’s punter, who also takes the kick-offs, Duncan’s powerful boot helps secure an important territorial advantage.

His reliable place kicking ensures most Warriors touchdowns are converted while not only is he sure-handed but he is a strong and quick runner with the ball in hand.

Kicking is often highlighted as a weakness in British American Football, despite many players having rugby and football backgrounds, but the former soccer player puts the consistency of his performance down to his dedication to the sport.

The Dubliner had a classic Irish-American introduction to his chosen sport in New England via the region’s dominant team the Patriots.

“I’ve got a lot of family in Boston and 15 I went over and I first experienced American Football. It was Christmas and it was the end of the season, or an early play-off game, and my family are all big Patriots fans.”

A few years later Duncan discovered the sport was played in his home country: “I was talking to a friend of a friend and he was the quarterback for the local team and I said ‘what there’s American Football in Ireland?’ I went to join the Dublin Dragons, who rebranded as South Dublin Panthers, and they played in Lucan my hometown.”

When work brought Duncan to south Wales in 2016 he made an immediate impact as a receiver and punter with the Warriors. But despite winning three, and drawing one, of their 10 games that summer the Warriors relinquished their Premiership place, the club fearing it couldn’t truly compete at the top-level, especially with a spate of off-season retirements.

The following year the club endured a winless season that ended in relegation from Division One though Duncan had returned to Ireland and was playing once more with the Panthers.

“I came back (to the Warriors) half-way through last season but I’ve been living here consistently since March 2018 and the Welsh and Irish are very similar.”

Britbowl XXXIII takes place at the New River Stadium, North London with the South Wales Warriors v Bournemouth Bobcats kicking-off at 12pm on Saturday, August 31. The game will be live streamed on YouTube at Onside TV and via the British American Football Association Facebook page from 11.30am.