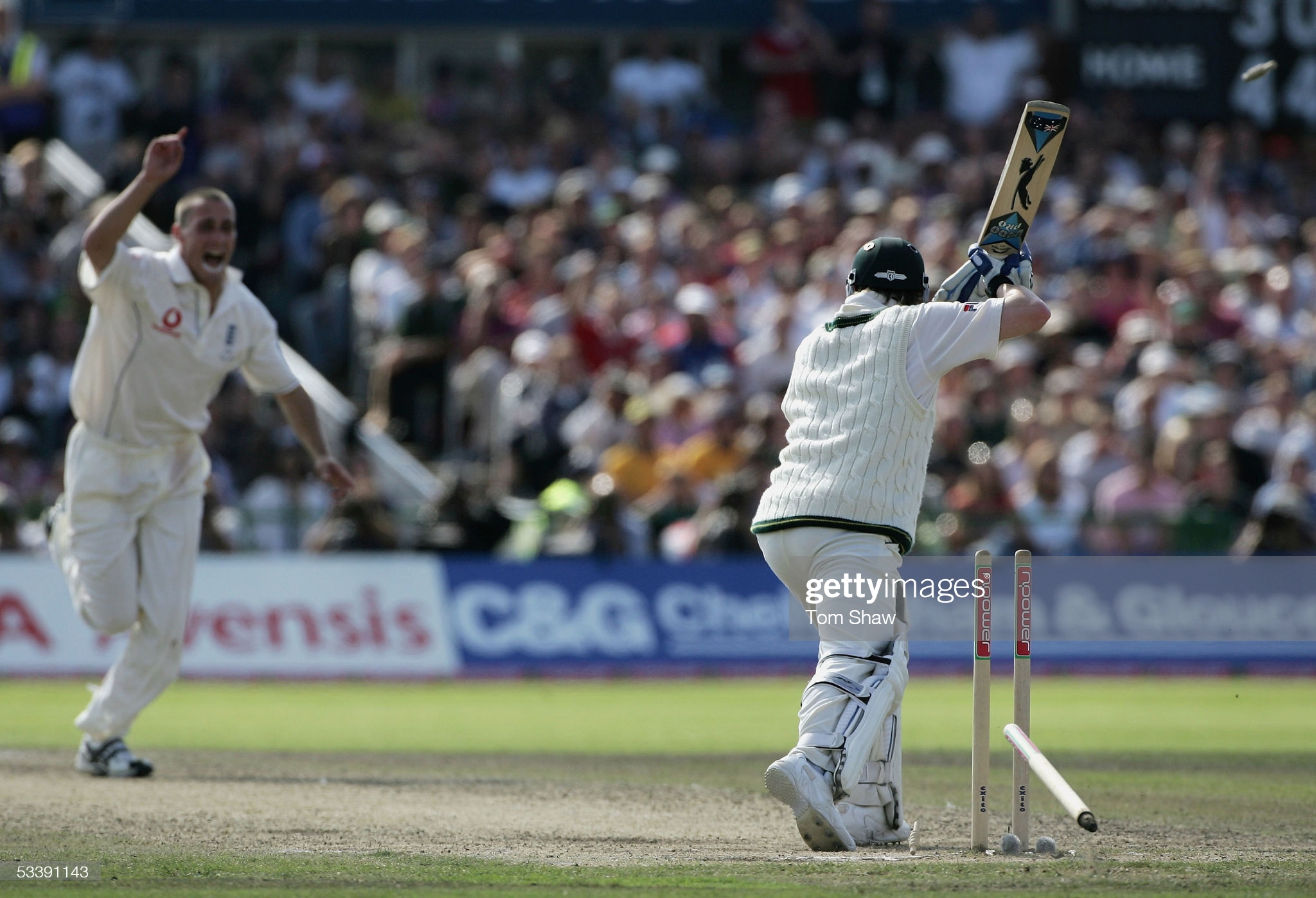 Simon Jones and his iconic moment at Old Trafford in 2005. Pic: Getty Images.

It’s not often the announcement of a TV rights contract ushers in much emotion, let alone some warm feelings of nostalgia. But the cricket deal to show England’s Test series in India from Friday has got Fraser Watson misty-eyed – and remembering one Welshman, in particular, who scaled the peaks of his profession.

For those of a certain era, the mere sentence prompts some gloriously rose-tinted day-dreaming.

And when news emerged this week that Friday’s opening Test between India and England would be aired by that same terrestrial channel, it was hard not to reminisce.

The birth of snicko, the analyst, England being awful, England then being brilliant, Mark Nicholas being suave, Richie Benaud being Richie, Flintoff at Edgbaston, Pietersen’s 158 – it all added up to six years of compelling, innovative coverage that brought a new dimension to a sport previously plagued by notions of dulcet tones.

And of course, it was coverage that aptly culminated with that exhilarating, unforgettable Ashes summer in 2005, that remains bestowed as the barometer for captivating Test cricket.

And yet, it wasn’t just Channel 4’s coverage, or Australia’s 18-year grip on the urn, that culminated with that nerve-jangling September day at The Oval.

It also signaled the end of an international great that never was.

Four Test matches into that series, only Andrew Flintoff (20) had taken more Australian wickets than Simon Jones (18). From both sides, only Shane Warne had a better bowling average.

Jones, the man who walked out on the first morning at Lord’s as the rough diamond of England’s attack was quickly elevated to the oracle of the swinging ball.

He would remove Damien Martyn first up on that opening day, although his figures would equate to modest returns in both London and the Test that followed at Edgbaston.

Displays in Manchester and Nottingham however, would define him. They would also help define the art of extracting reverse movement from a circular ball of cork and leather.

At Old Trafford, Ricky Ponting and Michael Clarke would be among the victims in a devastating first innings spell of 6-53.

In the second, it was another delivery to the latter that sparked an iconic moment – Clarke leaving a ball he expected to swing away, only for it to deviate back and uproot his off-stump.

Trent Bridge would yield another haul, taking 5-44 as England built a sizeable first innings lead. As the story goes, when Michael Vaughan and co debated whether to enforce the follow on, it was Jones who vociferously insisted upon the idea of bowling again.

Although not without a caveat. His latest spell with an old ball, now had to continue with the new one.

Within all this lay no shortage of irony. On the final morning of that excruciatingly close Edgbaston Test – which England would eventually win by 2 runs – Vaughan infamously declined to give Jones the ball. Now, he dared not take it off him.

Inconceivable in that moment was that the 24 deliveries Jones would then accumulate against Messrs Langer and Hayden would represent his last spell for England.

Shooting pains in his ankle soon confined him to the balcony at Trent Bridge – he would be reduced to a spectator at The Oval – and further injury problems would later scupper a call up to tour India.

And yet, in some dubiously perverse way, this unsavoury international ending was fitting. For that epic Ashes series now serves as a microcosm for the career of Simon Jones – one whereby an abundance of talent, and flashes of excellence, were both undermined by physical fragility.

If 2005 provided an apt summation, it was perhaps 2002 that proved the precognition. Four wickets on Test debut against India had been deemed enough to merit a trip Down Under and a place in the starting XI at Brisbane.

With Nasser Hussain’s catastrophic call to bowl first at the Gabba, a then 24-year-old Jones proved the only brief bright spot of a harrowing first morning, taking the wicket of Justin Langer in a lively seven over spell.

And yet by lunch, his future seemingly hung in the balance, having ruptured an anterior cruciate ligament while sliding to field a ball. As a footnote, Australia would finish the day on 364-2.

By March 2003, however, Jones had sufficiently recovered and was recalled again – and a further 12 Test matches followed.

Notable four wicket hauls against South Africa in Durban and Centurion were deemed enough to cement a regular place.

The injury which forced that same place to be relinquished at Trent Bridge originally appeared a temporary disruption.

But continuing injury problems, supplemented by a trip to Colorado for knee surgery, eventually rendered a return to the international fold untenable.

There was further first-class action at Glamorgan, Worcestershire, Hampshire, and then Glamorgan again, accompanied by flickers of the aggression and wicket-taking prowess that had once signified him.

But prolonged stints of form and fitness were at a premium and come September 2013, albeit following a creditable display in a YB40 final, Jones and his body had had enough.

So reliving the highlights, the vines, the delivery that bamboozled Clarke, can only prompt the more inquisitive cricket fan to wonder what Jones could have become?

A total of 59 wickets in 18 Test matches represents numbers that would have been dwarfed had fate not so regularly intervened.

The skill, the swing, the capacity to move an old ball as well as the new one, all amounted to a bowler who had so much offer.

Jones, now 42, currently works as a school cricket coach in Cardiff – you suspect there will be no shortage of knowledge to pass on.

But perhaps, those of us who were embedded in the Test match audience of that era, and who can’t help but reminisce upon hearing about the resurrection of Channel 4 coverage this week, should be grateful for one particular aspect.

Yes, seeing footage of Jones in action again reinforces the nagging perception that here was an England great that never was.

But at the height of his powers, at least he was available to all of us – on free to air.