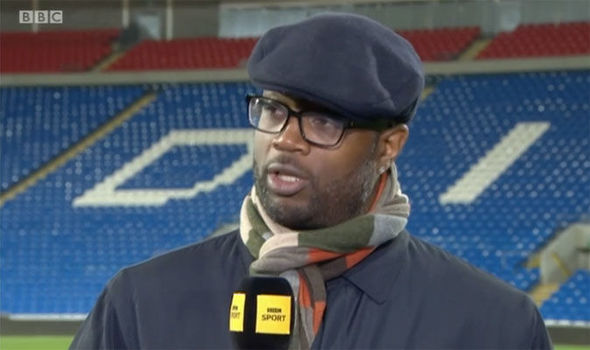 Former Wales striker Nathan Blake has backed the stance of Troy Deeney and other black players reluctant to start training again and admitted there is “no way” he would return at present.

Watford captain Deeney, England and Manchester City star Raheem Sterling, Tottenham defender Danny Rose and other leading black Premier League players have all expressed their anxieties over going back to train during the current stage of the coronavirus pandemic.

Their fears come after Office of National Statistics data showed black people and those from other ethnic minorities suffer disproportionately from Covid-19 compared to white people.

Deeney has revealed his five-month-old son suffers from breathing difficulties and his concerns seemed to carry extra weight after three people at Watford were found to have the virus this week following testing.

Both Cardiff City and Swansea City are preparing for their players to return to training in the Championship, once they have all undergone testing.

Speaking to BBC Radio Wales, Blake was asked if he would return to training at present if he were still playing.

“No chance! No way,” he said. “I’’ve got a wife and three children, and friends who I all love and care about.

“This is entertainment at the end of the day. All this, ‘the show must go on nonsense’ is easy to say but it’s a little different in reality.

“For me, black people are clearly affected differently to white people, so I wouldn’t be thinking about it at all. I would be expecting someone to come to me and guarantee things and we’re not there yet.

“I know the lockdown is driving people stir crazy, but football is entertainment and there are far more important fields to get back to, first. Football is a bit further down the line.

Blake’s stance comes after the UK government announced the creation of a new taskforce examining how the recreational and leisure sector can restart, including top level sport.

Deeney chose not to return to training with Watford this week and said: “We’re due back in this week. I’ve said I’m not going.

“Within the meeting (with the Premier League concerning return-to-training protocols) I asked very simple questions.

“For Black, Asian and mixed ethnicities they are four times more likely to get the illness and twice as likely to have long-lasting illness – is there any additional screening? Heart stuff to see if anyone has a problem?

“I feel that should be addressed. I can’t get a haircut until mid-July but I can go and get in a box with 19 people and jump for a header? I don’t know how that works. No one could answer the questions – not because they didn’t want to, because they didn’t have the information.”

Dowden has said the taskforce would “help us think through how we can get sport back safely in a way that works for both clubs, players and supporters alike.”

He added that guidance published last week for how elite athletes could resume training would “pave the way for the return of live sports behind closed doors in the near future.”

But Blake added: “Personally, I think it’s probably too soon. It’s a life or death situation for a lot of people and a lot of people have been touched by what’s gone on.

“It’s crazy. People are scared out of their wits. We are hearing about people being given increased fines for travelling about and yet professional footballers are being asked to return to action as if everything is A-okay.

“For me, I totally understand why people have their reservations about going back.

Danny Rose: “The fact people are suggesting we should go back to football, it’s basically like we’re guinea pigs or lab rats, that we’re going to go back to this phase and see if it works or not.” 🐀 pic.twitter.com/Ib2Ph1ZjMh

“I just think you are asking too much. I think we have to get to a situation where every country in the UK has the situation under control and then you can move forward.

“This isn’t about whether you have money or not, or whether you are a football fan or not. It’s a case of life or death so I don’t see why anyone should be asked to go back to training, or play, until we know that the virus isn’t being contracted and passed on to other people. It’s crazy to ask.

“From a player’s perspective, can you be sure that every single person around you is being tested or going through the right procedures? It’s almost impossible to manage.

“If the task force have more information about what is going on, fine. But you have to remember that this will fall on someone’s head if it all goes wrong.”