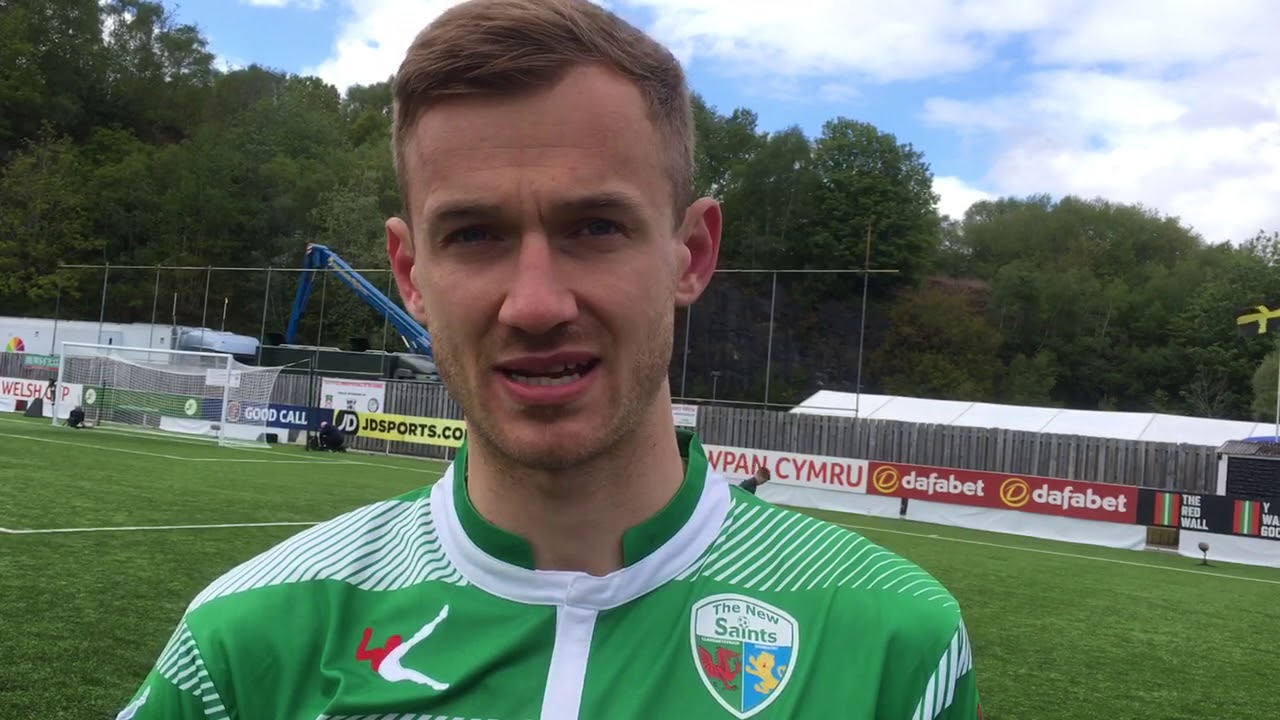 Blaine Hudson helped turn things around for The New Saints.

Blaine Hudson believes the way in which The New Saints hit back to beat Haverfordwest County in the JD Cymru Premier League will have knocked the stuffing out of their major title rivals.

The Pembrokeshire side headed north looking for another upset following their 1-0 triumph at Bala Town and twice took the lead at Park Hall against an unbeaten TNS team.

It took a cruel own goal in injury time to crush their dreams.

Hudson got on the scoresheet to level things up at 2-2 and was then in the vicinity when visiting skipper Sean Pemberton got the touch from a cross to concede the own goal that made it 3-2 to TNS.

“It was a bit hectic at times, but we kept going and ended up winning. We might not have done that last season,” said Hudson.

“To win the game in that fashion is always good, but we need to be better at home. We drew or lost too many of games like that last season.

“Winning like that, when other teams are looking for us to drop points, knocks the stuffing out of them. Before the game we just wanted to make sure won to go five points clear without any games in hand.

“Fair play to Haverforwest, they chased us around all 90 minutes and were excellent. Some sides come here and put 11 men behind the ball, but they came to play and it was an enjoyable game.”

In what was the first meeting between the two teams since 21 October, 2015, it took that injury time own goal, initially credited to Hudson, to secure the three points.

To their credit, Haverfordwest would have been full value for a point had it ended 2-2. They had a dream start and twice took the lead with Jack Wilson opening the scoring after only 11 minutes.

Ben Clark’s header levelled matters before the break, but then a penalty from Jack Williams on 52 minutes made it 2-1.

The home side had a big job on their hands to hit back and it was defensive ace Hudson who made the difference.

He forced Pemberton into an own goal from a free kick to level matters and then struck home the match winner right at the death. The great escape had been completed.

A header at the back post ties things up for @tnsfc

The start almost mirrors that of 2016-17, when TNS won their opening eight games to pick up a maximum 24 points.

“It’s a really positive start and, looking back on it, there have been some excellent performances. Not conceding in the first seven games gave us a big lift,” said Ruscoe.

“We’re now a quarter of the way through the season and if we can continue like this we’ll be in a good place. Our start has given us a platform to build on to take us to where we need to be.

“Nobody is going to win every single game of every single season. If you improve on last season and the season before, that’s all I want.

“Every season I’m here I just want to improve on everything that we do. The start has been a vast improvement on last season’s start, so that gives you confidence and it gives the players confidence.”

The game at Park Hall was the only fixture of the weekend in the JD Cymru Premier league because of the new Welsh Government ‘firebreak’ regulations.

The New Saints v @HaverfordwestFC – live this Saturday at 5pm on S4C. https://t.co/rhPuUneO4m

The clubs were given the chance to stand-down during the 17 day national lockdown, but Ruscoe wanted his team to carry on.

As a result they will be in action each weekend throughout the ‘firebreak’. They travel to Bala Town on Saturday, 7 November and then head to Barry Town United seven days later.

“We don’t need a break, we’ve had too much of a break in lockdown. For me, the more games we can play the better,” added Ruscoe.

“I’m glad we could play Haverfordwest County and then Bala two weeks later. In between, we’re looking at another in-house game as well, so it’s all good.”

Earlier in the week, Bala moved to within a point of Connah’s Quay Nomads in third with their 2-1 win over Flint Town United.

Having fallen behind to an Alex Jones goal after 27 minutes they hit back with goals from Chris Venables and Steve Leslie to make it four wins in a row following their shock home defeat to Haverfordwest County.

Aberystwyth Town snapped up the 25-year-old Argentine midfielder Matias Etchegoyen on the last day of the transfer window. He joined from Mons Calpe SC, who play in the Gibraltar National League.

Born in Florida, Argentina, Etchegoyen made his senior debut with Club Atlético Acassuso, who are based in Greater Buenos Aires and currently compete in Primera B – the third tier of Argentinian football.

Since leaving the club in 2018, he has gone on to represent Italian side Varese and Metropolitanos, from Venezuela.