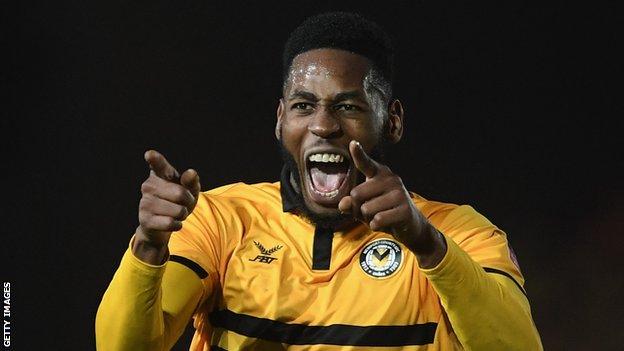 The Irishman from Carlow admits he watched video replays of the spot-kick which sent Newport County through to the Emirates FA Cup fourth round time and again.

“I watched match of the day and then the whole game again,” said Amond. “I was still there in the early hours and I have to admit to rewinding the penalty a few times.

“That was a great moment for everybody at Newport. It’s been brilliant – one of those moments that doesn’t come along too often.

“We caused a massive upset and it was a deserved victory.

“To be honest I was more nervous watching the penalty and listening to the commentary than I was stepping cup to take it.No idea why.

“When I think back it all seems a bit mad. Credit to the players, management and fans.”

Amond, aged 30, has scored 16 goals for County this season and – along with Jamille Matt – has netted in all three FA Cup rounds so far.

The former Shamrock Rovers striker knows exactly who he wants Newport to face in the fourth round, saying: “Manchester United away would be brilliant.

“Having said that the best opportunity we would have is at Rodney Parade. Nobody would want to come to our place.

The scenes at the final whistle yesterday were simply special.

Who else is looking forward to the @EmiratesFACup Fourth Round Draw tonight? 🤩#OurJourneyContinues ⚫️🔶 pic.twitter.com/b7kFj1he1L

“We pushed Spurs all the way last season and showed that wasn’t a one-off by beating Leicester City.

“Whoever we draw they won’t fancy coming to our place.”

Amond has netted almost 150 first team goals during his career including 30 for Newport.

Their next fixture is against Crewe away on Saturday and manager Michael Flynn will insist his players forget all about the FA Cup after the draw, which is being made after the Wolves v Liverpool tie this evening.