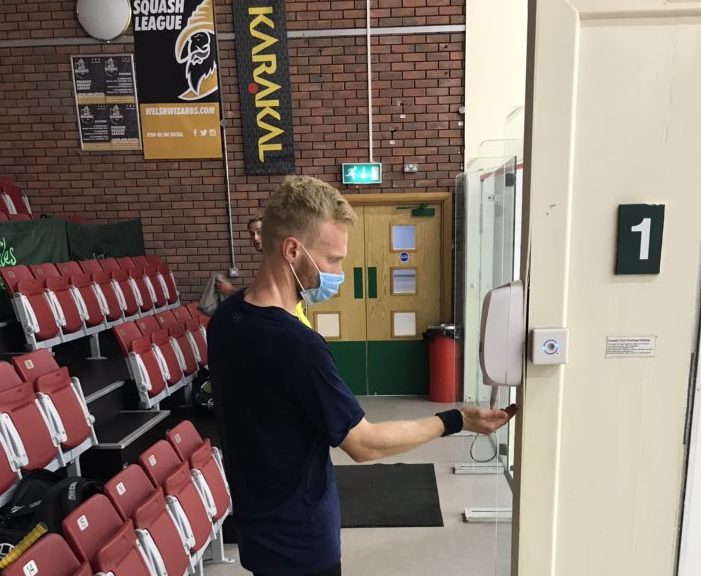 Joel Makin - with mask - sanitises his hands before going on court in Manchester last week.

Few indoor sports have returned to Wales – even at elite level – but squash is one that has been able to get back indoors. Things are very different, though, for the likes of Joel Makin and Tesni Evans – the country’s top male and female players – as Graham Thomas discovered.

Anyone who thinks using a mask on public transport in Wales is awkward or uncomfortable should consider how it might feel wearing one to play squash.

That’s exactly what Wales’ three leading male players are doing at present, having returned to the sport at Cardiff’s National Sports Centre.

As part of the phased return of all sport following lockdown, Joel Makin, Peter Creed and Elliott Morris Devred are all back training, but with some unusual modifications.

While on court, the trio not only have to ensure social distancing from each other as they work through their exercises and drills, but they are required to wear face masks to reduce the risks of the spread of Covid-19.

It will be the same for Wales’ top women’s player and world number nine, Tesni Evans, when she makes her return in a few days’ time.

Evans is currently based back in her North Wales home, so her return is delayed while accommodation is found for her in the capital – although she may use the Sport England squash centre in Manchester as a temporary base.

For Makin – the world’s current No.10 in the men’s game – and the others, the mask challenge is proving a tough one to overcome.

But Squash Wales performance director David Evans insists the trio are proving they have the resourcefulness to match the resilience they showed in lockdown.

Evans, a former world number three, says: “The guys are having to wear masks at present, which in a sport like squash is pretty tough and they found it difficult at first, to be honest.

“But they have come to terms with it very quickly. They’re extremely fit guys and having had 12 or 13 weeks without being allowed on a court, they look at it quite positively.

“If wearing a mask is the price of being allowed back, then they’re viewing it as a small price to pay.”

Although the trio can train and work through their skills and drills together, the social distancing requirements mean that they cannot do match play.

“A match would mean the players would come within two metres of each other, so that’s ruled out at the moment,” says Evans.

“With the drills, you know where the ball is going, so it’s easy to stick to the distancing rule. Hopefully, in time the restrictions will be eased a bit. In a lot of countries, where squash players have returned, they’re not wearing masks.

“But we are happy to be careful and cautious because this all is about safety and public health, which has to be the priority.”

In fact, Wales is the only place in the UK at the moment where elite players have returned to the squash court.

Great to see @sqwales athletes back on court at @sportwalesNC . A big thanks to all @sportwales for making this possible. pic.twitter.com/OAcssNTD6y

In England, they are still waiting for the go-ahead, but in Wales even though it’s an indoor sport, it was felt that the small numbers of elite players involved made squash suitable to be alongside the likes of boxing and gymnastics that were given the green light for a strictly-controlled return.

Makin, Creed and Morris Devred are all subject to temperature checks and extra hygiene measures, but they also have other issues on their mind.

Exercising through lockdown may have maintained their general levels of fitness and flexibility. But the specific physical demands of playing the game can only be gained on court.

“You can do all the static lunges you want in the gym or in the house, but until you actually get into those dynamic lunges on the court, then you can’t really test yourself,” says Evans.

“So, there have been a few sore backsides and aching glutes so far, but we have been very careful not to over-work them so there are no injuries.”

But the enforced break has also brought advantages. Tesni Evans has been able to fully overcome the ankle injury that threatened her season, while the rest and recuperation for the others has brought benefits according to her coach.

“Sometimes, players feel they are not hitting the ball well, but often it can be because they are tired or jaded and they’re not quite getting into the right position to hit the shot. Now, they’re all really fresh.”

No players yet know when they might return to competition, although it is hoped some tournaments could be held in the UK later in the year, if only for a TV audience.

“The important thing is that squash players are hitting a ball again and that’s big step forward,” says Evans.

“We incorporated the world squish guidelines and made them applicable to what was going on here in Wales and I’ve also been impressed with the amount of sharing going on between the sports.

“Athletics, boxing, swimming . . . all the governing bodies have been sharing information and helping each with applying the protocols because we all want the same thing – to get sport up and running again.”