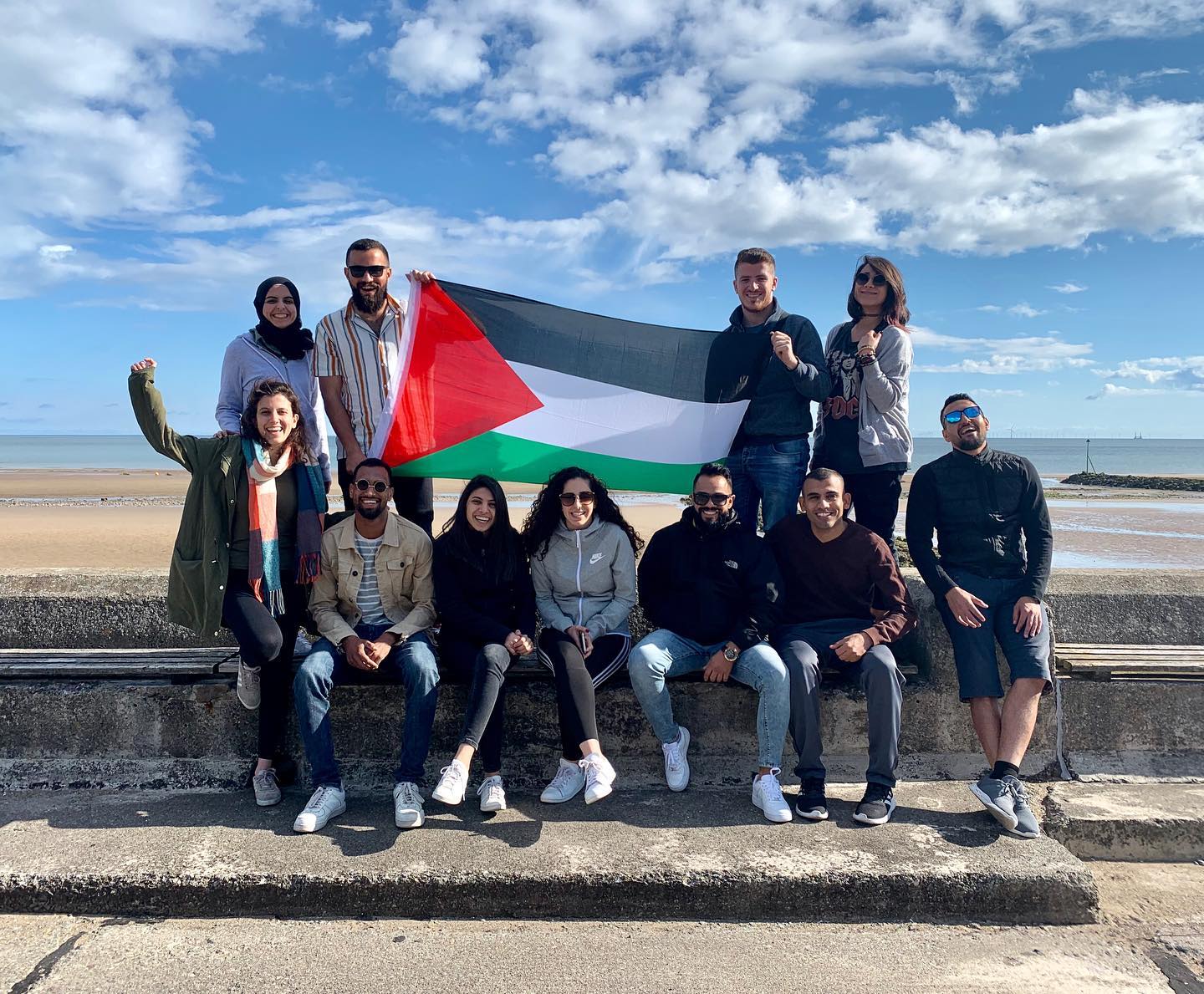 There are 20 stages including six official mountain climbs on the staggered relay race course, held mainly on the road with many hills and mountains en route from Caernarfon to Cardiff.

Among the teams were a group of Palestinian runners aiming to raise awareness of the human rights situation in their occupied homeland.

Eleven competitors from the Right to Movement Palestine sports organisation were joined by supporters and Palestinians living in Britain.

Right to Movement Palestine organises runs, hikes plus fitness sessions and also set up the annual Palestine Marathon, which begins in Bethlehem, passes through the Aida and Dheisheh refugee camps, runs along the separation wall and ends in al-Khader.

Team manager Diala Isid travelled from Ramallah and took part in the last leg to Cardiff, said: “It was exciting to take part in the WCR.

“I ran to represent Palestine and Palestinian runners.”

A brief history of the Welsh Castles Relay

1982 WCR was conceived at the 1982 Les Croupiers annual meeting by John Thomas and John Taylor. The first Castles event took place on July 17 July in the form of a solo relay starting at midnight from Cardiff Castle and running through the night to Caernarfon Castle.

1983  Six teams competed, this time running from Caernarfon to Cardiff, starting on the Saturday evening in North Wales and running through the night. This was a true relay race with a baton being handed over at the end of each stage. For safety reasons each runner was followed by a Land Rover.

1986 Change was forced due to increased numbers of entries with 20 teams now running. This involved the current ‘staged’ relay format and the same format still remains. Each year we re-inspect the route and invariably make some changes typically for reasons of safety and access. Over the years we’ve modified most if not all of the stages. The women’s race was created in 1986.

1990 Powergen became the major race sponsor and they stayed until 1998.

1992 The stunning but testing Criccieth to Maentwrog Mountain Stage was added to the route.

1994 The race entry was increased again with 40 teams taking part. Corus also sponsored a ‘Queens of the Mountains’ competition.

1995  The race was reduced from 21 to 20 stages, by-passing Welshpool in the process and creating the WCR’s Day One toughest leg (10), a mountain stage running from Llanfair Caerienion to Newtown, climbing 600 feet in the first 1.5 miles.

1998 For Les Croups members, the saddest year of WCR. Jeff Wood, a founder member of the club and a much loved character, collapsed within yards of the finish of stage one and died. We remember him in part care of the WCR ‘Jeff Wood’ Memorial Award – given every year to the first over 50 vet to finish the nominated ‘Jeff Wood stage’ (always a non-mountain stage as Jeff didn’t like hills)

2001 Race cancelled because of Foot and Mouth.

2006 60 teams accepted. Race traffic issues limit the size of the race entry, though, and the maximum was set at 58 teams.

2010 Rule Change – only affiliated first claim runners can take part in the WCR from 2010 onwards following complaints about some clubs abusing the previous second claim rule.

2013 A new team takes over the race, headed up by John Griffin, Mike Davies, Jeff Aston, Amanda Thompson and Phil Cook, with the continued support of a large band of committed volunteers. Teams of flying marshals are introduced to manage the marshalling of the race on all stages and tackle any tricky spots. This was the last year of stage 20 finishing within Cardiff Castle.

2015 The best yet as the sun shines brightly.

2017 Burges Salmon LLP sponsor. The race again and the weather was wet and windy. The highest ever number of teams, 66, took part. Stage 20 finish and presentations were relocated to Blackweir within Bute Park (due to the Champion’s League).

2019 The 37th WCR, starting in Caernarfon on Saturday morning. Teams stayed overnight in the Newtown area and set off again for Cardiff on Sunday.

Full results, a race report and photographs will be published on dai-sport this weekend.