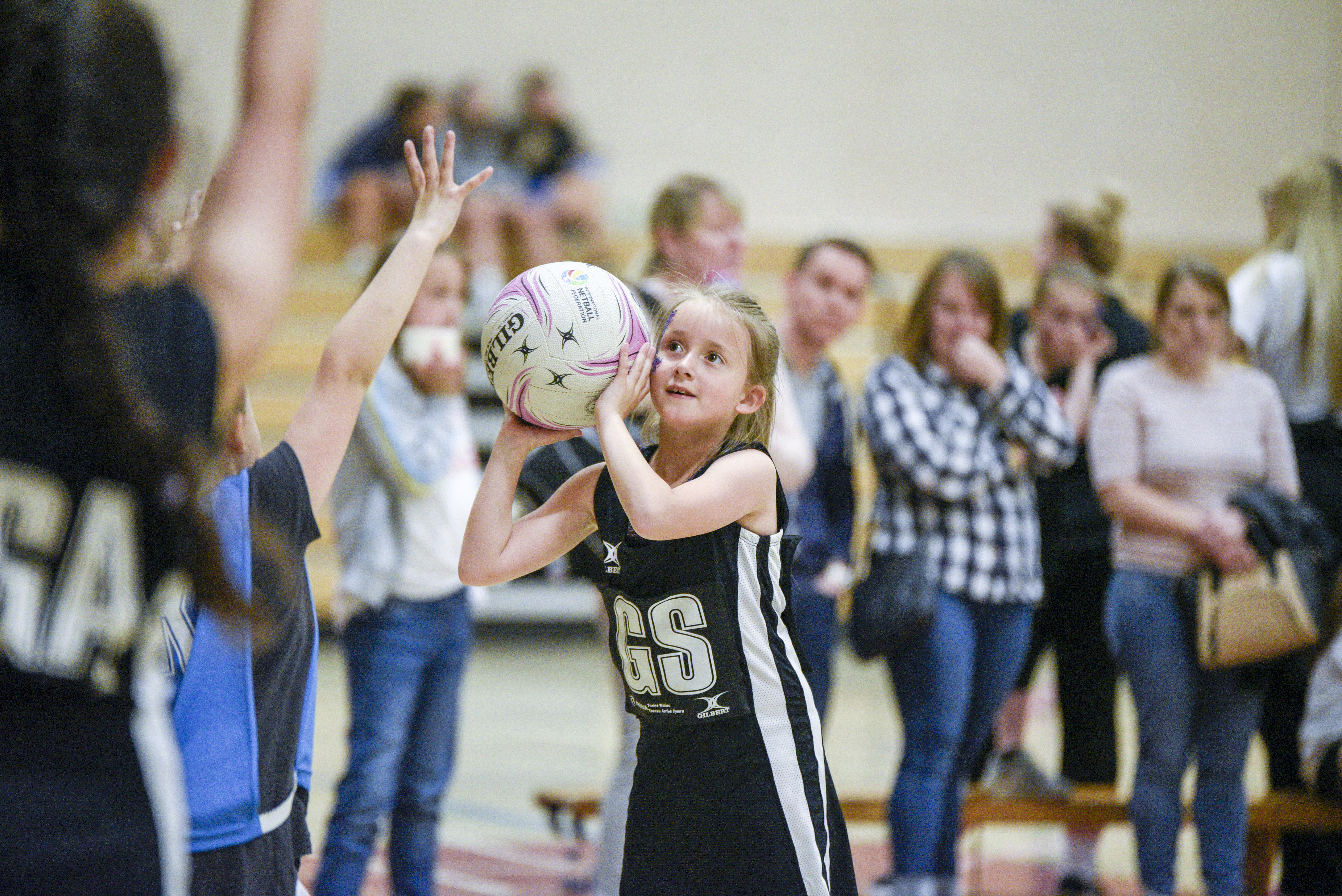 Action from the U9s at Rhondda Netball.

Want to know where one of the fastest growing and inspiring sports stories is creating a real buzz? Then, head up to Treorchy, or Ferndale, or Tonypandy, or Porth.

Rhondda Netball – creators of a tidal wave of female participation – are bridging the generation gap with five to 65-year-olds now getting on the court.

At the one end of the age range are the new “Rhondda Rascals”- girls as young as five who are being introduced to the sport in weekly after-school sessions.

Move along to the other side of the lifeline and Rhondda Netball are also running a “Back to Netball” programme, aimed at women who may have given up netball when they left school, but who want to get fit in a safe and sociable setting. They may even have hated the sport during their education, with its cold gymnasiums and pleated skirts, but find the world and the sport have moved on.

Mothers, grandmothers, aunts – the age range is as impressive as the take up rate, which has meant places on the current scheme have sold out.

The new players – young and not so young – are in addition to Rhondda Netball’s RCT Schools Netball League and an out-of-schools competition, all overseen by RN founder Lawrie Davies and his team of managers, co-ordinators and coaches.

It reflects a surge in interest in the sport with recent figures claiming over 130,000 adult women in the UK had either started playing or increased their involvement since this year’s Commonwealth Games.

Little wonder that the noise being made in the Valleys by hundreds of weekly players of all ages has grabbed the attention of those who share the same goals – to shake up Welsh sport by ensuring more girls and women are involved and shatter stereotypes that in some parts of the country people would rather sit than get fit.

Rhondda Cynon Taf council, through sports development officer Gavin Bennett, give support to Rhondda Netball by providing venues and Ann Crimmings, cabinet member responsible for environment and leisure says: “It can be hard to get females involved in sport, but they have managed it and they have got the support of the mums and the grans and the dads.

“That is very encouraging for a local authority that wants to address people’s health and well-being.

“They are now providing netball for under fives, which is an area where there is sometimes a gap in our provision. We want to get that age interested in sport.

“At the other end of the scale, is the back to netball initiative for older women for ages 35 to 60. The potential for improving their fitness and well-being is fantastic. We are much more aware now about how physical activity can improve mental health, stopping feelings of isolation, anxiety and depression.

“A lot of the old family extensions have gone. It’s not everyone these days who has their mum or their nan living just up the road. So, what a great idea for netball to be the provider of that social knitting together. It’s inspirational.”

The booming netball scene in the area is also helping change the perception of local authorities themselves in how they should approach sport, health and fitness for the people on their patch.

There was a time when many councils thought if they ploughed money into well-equipped gyms in leisure centres, they were doing their bit – as if a handful of sweaty males grunting and pumping iron all day was fulfilling their brief.

Not only was that a turn-off for half the population, but when figures are worked out per head, it was a massive waste of money.

At the same time, schools with decent indoor facilities were closing the gates and locking up at four’o’clock in the afternoon.

The netball surge was turned all that on its head.

“As it expands, they obviously need more court time. We’ve been able to allocate that. To engage with those numbers of girls and women is a real positive for us. It’s all about helping them increase female participation in sport.

“Where the schools used to close at four, we are trying to free up the use of their leisure facilities. We don’t want them closed and mothballed in the evening and at weekends.

Our new Rascals Progamme has got off to an incredible start and our coaches love introducing the future generation to sport and healthy activity!

“The interesting thing is that all this has grown out of and evolved from within the Rhondda. It’s not as a result of anyone coming in from outside and telling people what they should be doing. They have done it themselves.

“Lawrie is so enthusiastic, you can’t help but share that feeling about what is happening. I went along to one of their days and people who go along are blown away by the atmosphere there and the community spirit. There are girls of all ages there, the mums and the dads, and there’s just such a buzz around the whole thing.”

Rhondda Netball aren’t finished there, either, and have big plans. They are ambitious for the improvement of their elite performance team, the RCT Rockets, and would like to mirror the team’s progress with improved venue facilities.

For an area where more traditional sports, like rugby and football, have ruled the roost, than would be quite a turnaround.

“Male sports, like rugby, have always had that push from the grass roots below, but it’s been harder for others,” says Ann Crimmings.

“Seeing all those girls in the sports centres, just showed me they have pushed netball up to that sort of level which rugby has always enjoyed. It’s fabulous.

“People often think people in the Valleys just want to sit on their sofas. But they’ve got it wrong, very wrong.

“People want to be active and there are brilliant volunteers. Look at the growth of Park Run as another example. Now, netball is doing the same.”