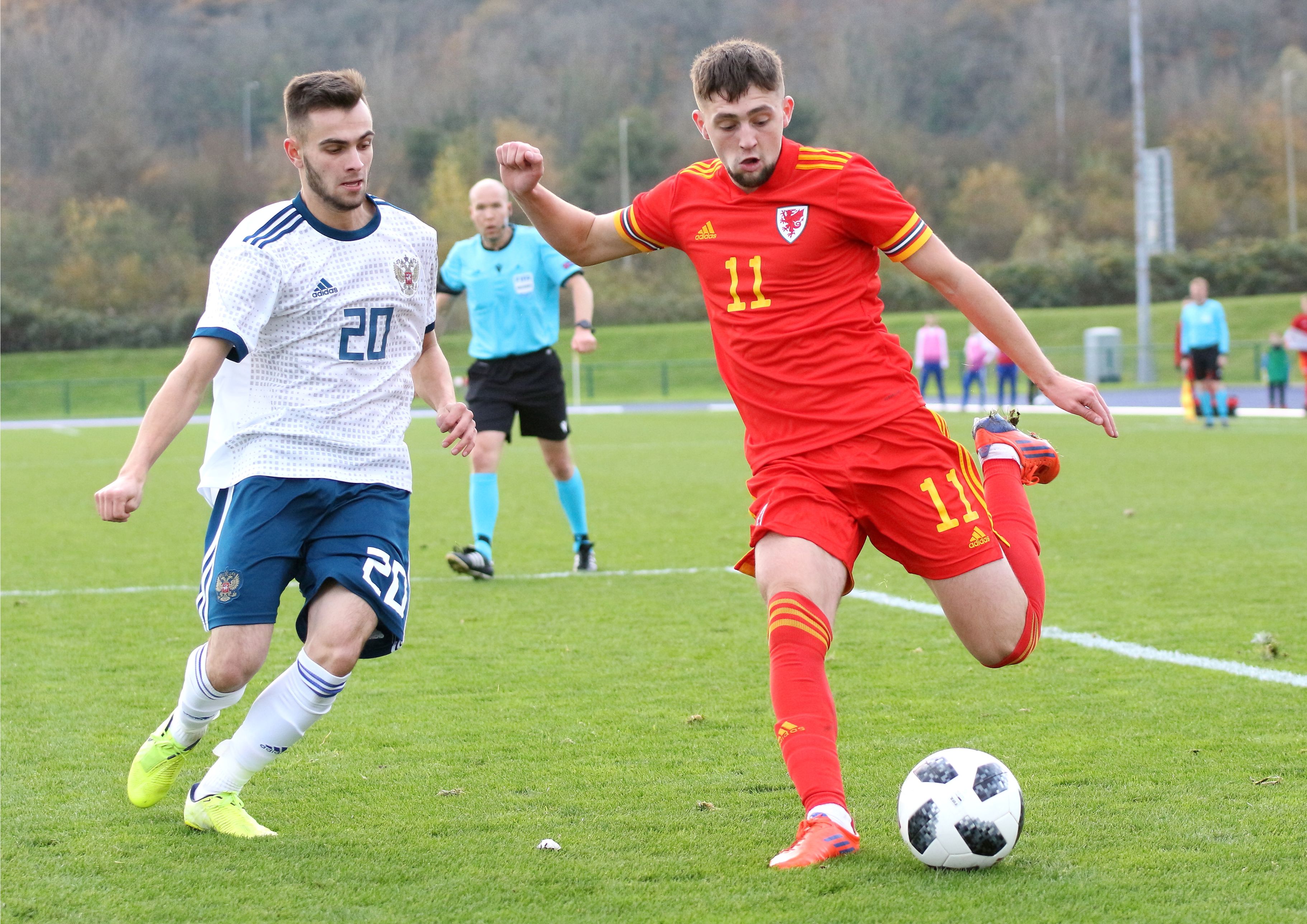 Joe Adams was a constant threat to Russia during the second half. Pic: Owen Morgan.

Wales Under-19 manager Rob Edwards praised the character and talent of his squad as they fought back to earn a valuable 2-2 draw in their UEFA European U19 Championship qualifying round match against Russia on Saturday.

The result sets up an exciting curtain raiser to the senior team’s winner-takes-all meeting with Hungary in Cardiff on Tuesday night.

The U-19s face a lunchtime clash with Kosovo in Newport, where a point will see them qualify for the elite round of the competition alongside the best sides in Europe.

The young Dragons were under the cosh during the first half against Russia at Cardiff’s Leckwith Stadium and had to thank a courageous performance by goalkeeper Lewis Webb for keeping the score down to 1-0 at half time.

But the home side stormed back in the second half with two calmly taken penalties from Liverpool starlet Neco Williams putting them ahead before being pegged back by a late Russian equaliser.

Edwards said afterwards: “It was a tough game. I’m slightly disappointed that we were 2-1 up with a few minutes to go but the boys were tremendous in the second half. We had such a difficult first half, Russia were excellent. Our goalkeeper kept us in the game at times.

“We made a few changes at half-time in terms of personnel and the way we wanted to play but the boys were so brave in terms of possession and got us back into the game and then 2-1 up. It was a fantastic performance in the second half.”

The opening exchanges saw Russia looking confident in possession and working hard to press the Welsh youngsters into mistakes whenever the home team had the ball.

With Russia dominating proceedings, Swansea City’s Webb was called on to pull off a string of spectacular saves.

His resistance was finally broken after making another remarkable one handed stop low to his left, only to see the rebound tapped in by Kirill Kosarev after half an hour.

Wales suffered another blow shortly afterwards when Webb was forced to leave the field with a head injury to be replaced by Norwich City’s Daniel Barden.

Wales rallied a little during the remainder of the half with Southampton striker Christian Norton producing a spectacular improvised volley which flew wide and Williams cutting in from the left to force a save from Russian keeper Ivan Budachev.

The home side looked far more composed in the second half with skipper Morgan Boyes, Keenan Patten and Sam Bowen starting to exert their influence in the middle of the park with Joe Adams providing a constant threat down the Welsh left wing.

The second half was a complete opposite of the first as Wales started to dominate and create chances.

They eventually gained their reward on 65 minutes when Russia were adjudged to have handled in the box. Williams stepped up to calmly fire the penalty high into the net.

Second half substitute Dan Griffiths, currently on loan with Pen-Y-Bont from Cardiff City, was now proving a real handful for the previously composed looking Russian defenders as he combined effectively with Brentford’s Adams.

And it was the powerful Griffiths who was pulled down in the 81st minute to provide Williams with the opportunity to confidently slot home his second penalty.

Wales looked on their way to a second victory in the four-team group having beaten Poland 3-0 at Rodney Parade earlier in the week.

However, their celebrations were short lived as Danila Prokhin produced a powerful stooping header to force a draw.

Despite the late disappointment, Edwards was pleased with the way his team responded in the second half.

The former Wales defender, said: “We had a conversation about being more aggressive, getting higher up the pitch, we spoke about playing a certain way, just to get five or 10 yards further up to get a bit more pressure on them.

“They actually dropped off us a little bit so we got a little bit more control with the ball as well, so that helped.

“Our boys were more aggressive second half out of possession and in possession we were better with the football.

“The teams we’re playing against, the Polish boys the other day and today, they are very good with the ball and we need to be as good as that and have the energy and the passion that our lads showed today in the second half.

“Iestyn came off because he had been booked and the referee looked like he might send him off, Joe went wide and we swapped Neco over. The two of those are a threat in wide areas and they added a lot to the team.”

Asked about Griffiths’ contribution after being introduced from the bench, Edwards said: “Dan has been desperate for a chance, he didn’t start the first game or today and it was perfect for him to come on.

“He’s brilliant around the squad, he’s bubbly, lively and infectious and it was ideal for him to come on today and he added that personality and positive energy.  It made a difference to the team.

“We’ve got some good players, this under 19 group, a lot of coaches have worked with these boys over the years and it’s a pleasure to work with them.”

The result put Wales on top of their group and in pole position to qualify for the elite round with one match to play on Tuesday against Kosovo at Rodney Parade.

Edwards is confident his team will give a good account of themselves and help set up a memorable day all round for Welsh football.

“It looked today like we wouldn’t get our football going at all, but we got it going second half. Who knows how the game will go, that’s the beauty of the game, no one knows the challenges we will have, but one thing is for sure, these boys aren’t scared of accepting a challenge.

“I looked at their faces at half time and they were so keen to go out for the second half after looking slightly disappointed that we had conceded the first goal. There were some heads down and some shoulders and we said ‘it’s a game of football, you’ve conceded a goal, you need to go and get the next goal’ and they were superb.”

Edwards is excited about the future potential of the group and says many are ready to make the step up to the Under-21 side managed by his Under-19 predecessor Paul Bodin.

“A lot of these boys were playing in the elites last year for Paul, they are quite experienced at this level now, if we don’t qualify for the elites this could be the last time they play for the 19s. I think a lot of them are capable of playing for Paul in the 21s and moving on.

“They are talented, ready to learn, they are proud to play for Wales, they enjoy playing for Wales, I don’t see why they can’t push on in their careers.”

A draw against Kosovo on Tuesday at Rodney Parade (Kick-off 1pm) will guarantee qualification for the elite round.