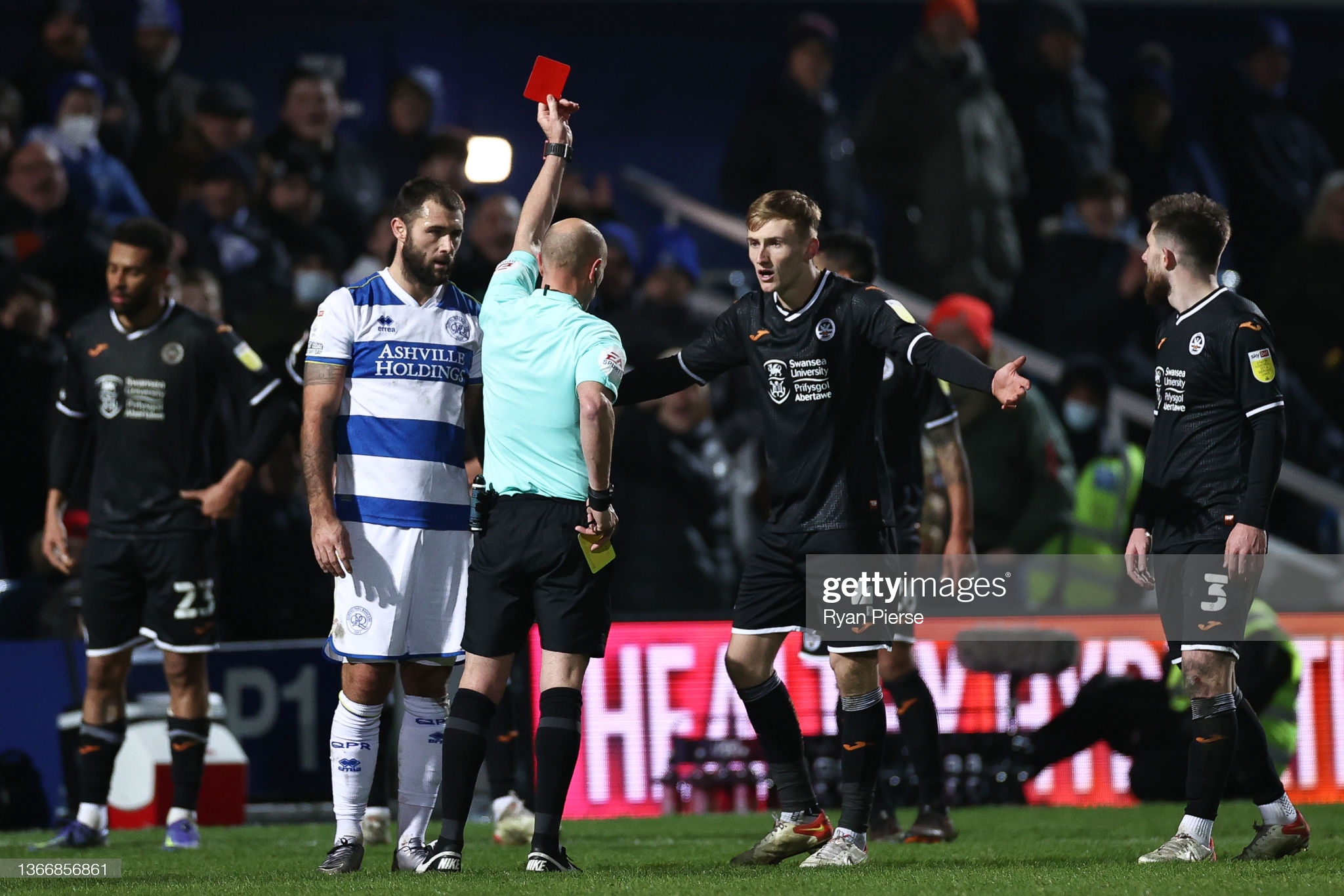 Russell Martin has praised his Swansea City players’ character as they made it three matches unbeaten in the past 10 days.

The Swans head coach was happy enough to take a point from a 0-0 draw at promotion-chasing Queens Park Rangers, which backed up a weekend victory over Preston.

The visitors had midfielder Flynn Downes sent off in added time after a clash with Charlie Austin, but the 10-men hung on to cut the gap between themselves and sixth-placed Huddersfield to 12 points with three games still in hand.

“I thought we were great,” said Martin.

“I’m really proud of the team. I asked them to come here and show courage and be the team that we want to be and they’ve done that.

“We showed some serious character. There was a really good mentality and a real intensity to the game.

“With a bit more quality in the final third I think we could maybe have come away with three points, but it’s back-to-back clean sheets and we got the least we deserved tonight.

“Some of the football was really good on a tight pitch against a very good team who are really aggressive.

QPR 0-0 Swansea City: Both sides spurn chances as Flynn Downes is sent off in stalemate https://t.co/5VEJFiNKSv

“The bravery they showed to play the way they did was incredible. We’ve shown that on our day we’re capable of producing performances that can compete against anyone.

“I really feel that we’re growing all the time and the players fully believe in what we’re asking them to do.”

QPR were unable to extend their winning run as they were held by a stubborn Swansea.

The west London side had won their previous four Championship matches and would have climbed to third in the table with another victory.

Instead they remain a place further back, two points behind second-placed Blackburn with a game in hand.

Swansea, who stay 17th, ended the match with 10 men after Downes was sent off in added time for tangling with Austin. Both players were booked, Downes picking up his second yellow card.

“He headlocks Flynn Downes – I don’t know what you expect Flynn to do.

“He is trying to get out of it and that’s it really, then he gets pulled away from the scuffle.

“The referee has not seen it, the fourth official has given it. That’s why I was so angry about it.

“I am saying it’s a lesson for Flynn but he is competing for the ball and then that happens.

“I don’t know really know what the ref or fourth official expect of him. I am really disappointed by it.

“We lose Flynn for a game which is disappointing – he has been incredible for us. I am frustrated with that.”

Luke Amos went closest to breaking the deadlock when he hit a post just before the hour mark.

Flynn Downes was very silly to get involved with Charlie Austin to get himself sent off. He’s a terrific young footballer but he needs to be a lot more sensible in these scenarios. Huge loss for Saturday’s game.

The Rangers midfielder darted through on the right-hand side of the area and drove the ball low across the face of goal and against the woodwork.

But Swansea were a threat and veteran goalkeeper David Marshall kept them at bay in the opening stages of the second half.

The Scotland international looks a shrewd short-term signing by QPR while first-choice keeper Seny Dieng is with Senegal at the Africa Cup of Nations.

Marshall, making his third appearance since being brought in from Derby, did brilliantly to keep out Joe Piroe’s low shot.

Marshall was also alert to push away Cyrus Christie’s dangerous cross and Matt Grimes’ follow-up as the Swans put Rangers under a spell of pressure.