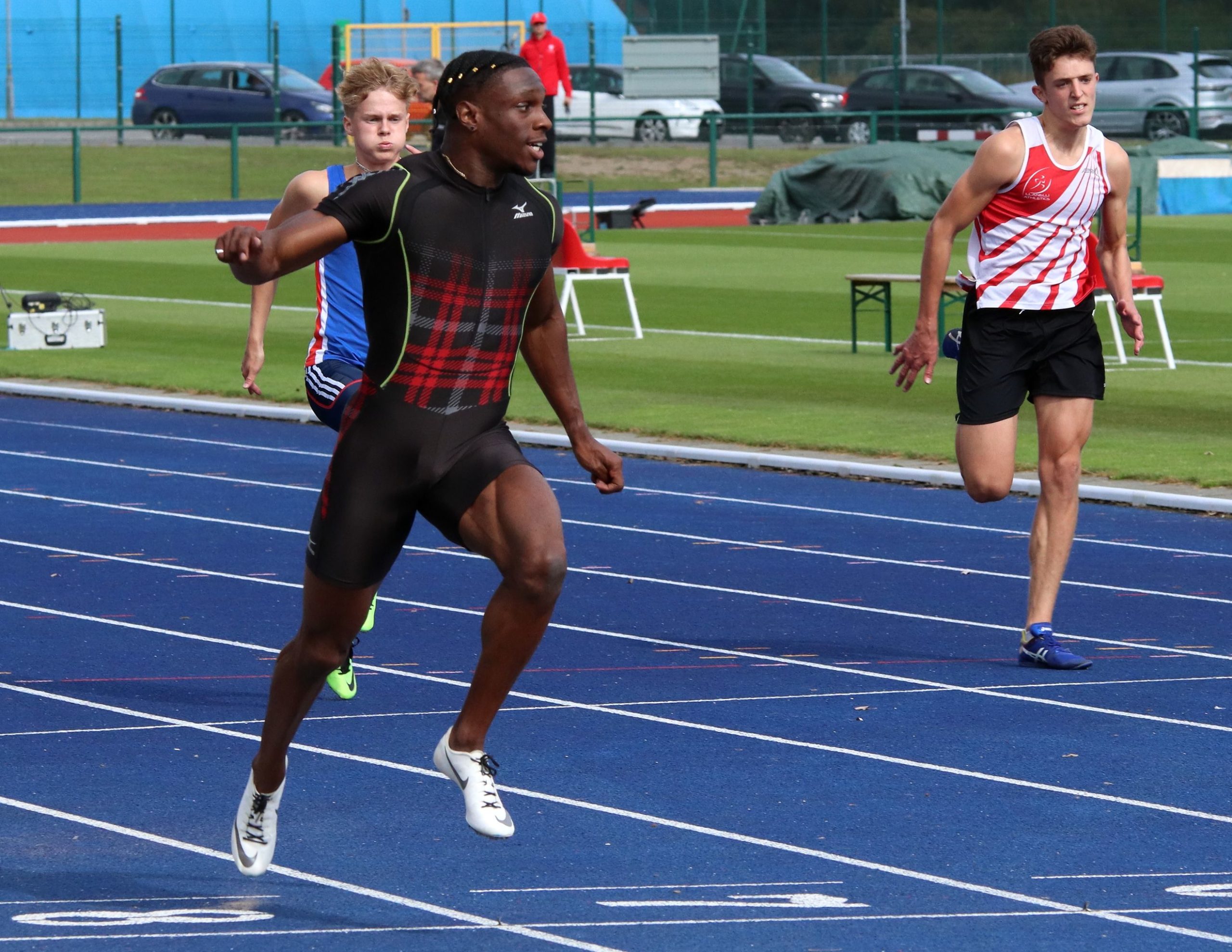 Welsh 100m champion Sam Gordon continued his return from injury with a win at the Sprints Open event held in Cardiff on Saturday.

On another day, the Cardiff Athlete would have been happy with a time of 10.25, which would have been a new PB, but a strong tailwind meant he had hoped to run in even faster.

The rattling of the football goal post stanchions at a blustery Cardiff International Sports Campus meant there was no need for a wind gauge to tell anyone the sprinters were being given an extra push.

But the official apparatus measured the tailwind at 5.3m/s, which wasn’t even the highest reading of the afternoon.

Gordon had only run competitively twice during this disrupted sporting summer due to hamstring and back problems.

Asked whether he was happy with his performance, a smiling Gordon said: “With a plus five wind? I was hoping to go quicker!”

However, he was grateful to be back on track injury free.”I’ve been struggling with injures from my first race where I pulled my hamstring.

“In my second race, due to my hamstring issues, I was having nerve problems in my back from the sciatic nerve. I had to pull out of the British Championships because of that.

“I got myself ready for this one, hoping to finish off the season with something and just to run without feeling any pain, which is what I got today.

“So I have got to take that as a positive, but I am never going to be happy with myself unless I do something special.

“But with the year that it’s been with everything that’s happened, you’ve got to be happy with it. If that had been legal, I would have said ‘fair enough that’s not a bad run’!”

The second fastest men’s 100m time of the day came from Cardiff Archers’ under-17 athlete Zak Wall, who dipped under 11 seconds for the first time with his time of 10.98, albeit assisted by an illegal wind of 5.1 m/s.

The Welsh Athletics organised event featured a total of 18 seeded mixed races over 100 and 200m.

The meeting, which featured a mixture of age grade and senior athletes, was the latest measured step on the sport’s return to some kind of normality after lockdown.

The fastest female 100m time of the day was remarkably clocked by 12-year-old sprint sensation Nell Desir, who registered a rapid 12.07.

Desir’s winning time was well inside the new Welsh Under-13 100m record of 12.34 she set in Worthing last month, but was once again the run was wind assisted.

The second fastest female 100m time of the day was clocked by another age-grade athlete, Carmarthen’s Under-15 sprinter Jessica Lea, whose 12.19 would have been a new PB but for the conditions.

There was a fascinating finale to the day’s action in the 200m A race which featured Great Britain 400m internationals Owen Smith and Jo Brier, who has run a couple of big one-lap personal bests this season.

To add an extra bit of spice, the race also featured Brier’s Swansea club mates Steffan Dylan Jones and Dan Beadsley, both of whom have been in spectacular form during this most unusual of summers.

But it was Brier who came out on top with a blistering run of 20.86, which was more than half-a-second faster than his previous quickest 200m time, but boosted by a 6m/s following wind. Beadsley was second in 21.27, with Cardiff Athlete Smith third in 21.32.

The fastest female 200m time of the day was clocked by Cardiff’s Esther Adikpe, who stopped the clock in 24.97, while in the same race club mate Rachel Donnison ran 25.55.