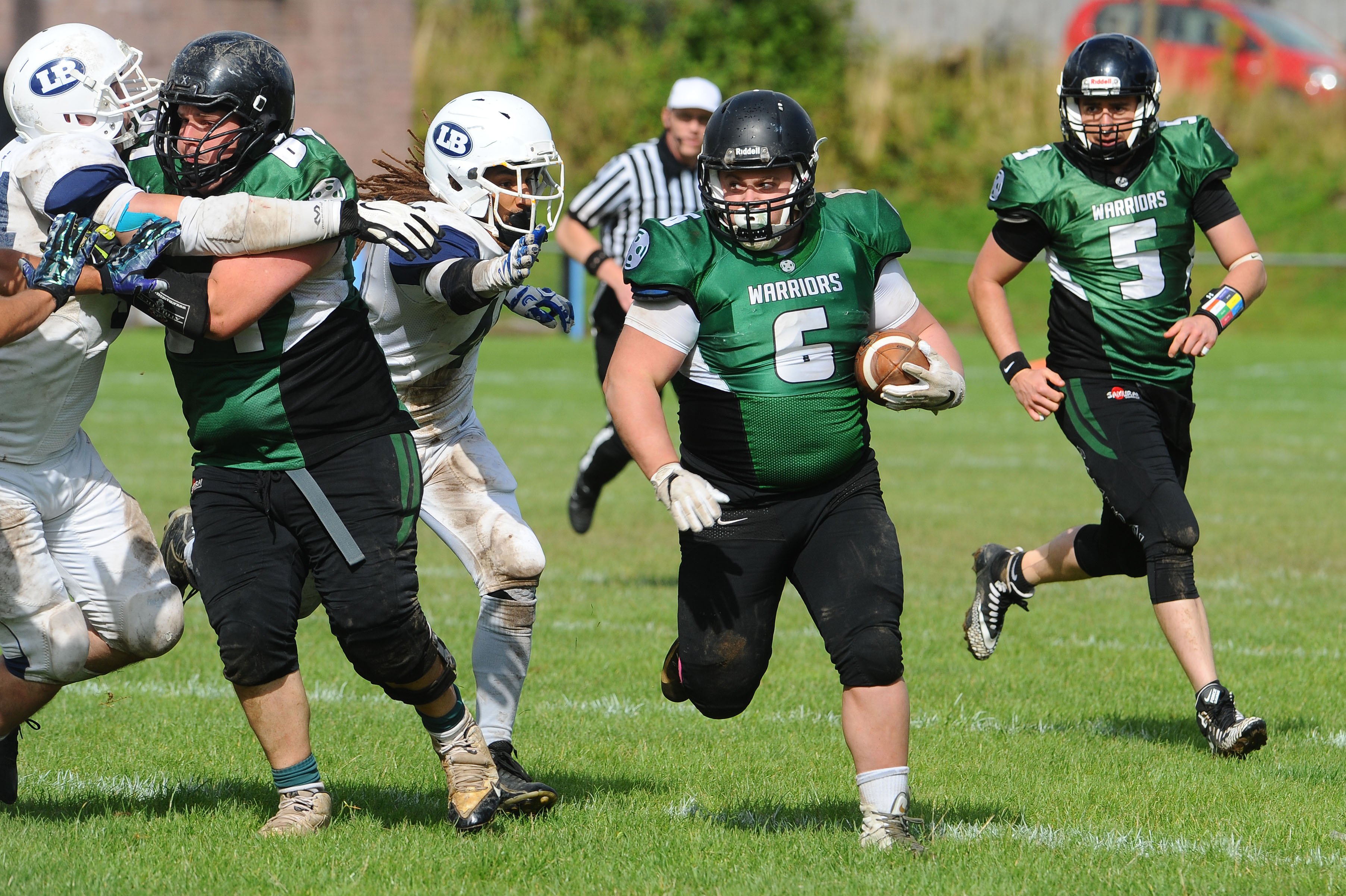 The South Wales Warriors have won promotion to Division One of the British American Football Association National League and now have the chance to win a conference title.

The Warriors survived a bruising semi-final with the London Blitz B to win their place in the Division Two Southern Conference Final which has guaranteed promotion to the middle tier.

Head coach Geraint Roberts said the team had accomplished its mission for the season but are still aiming to win the conference crown when they face the Bournemouth Bobcats, in London, at the end of the month.

“Promotion was the main thing and today is an opportunity for the boys to celebrate as we’ve done what we wanted to at the start of the season.

“We’ve gone unbeaten, had the home field advantage for the play-offs and got promoted which is what matters most. We’re just going to enjoy it now,” said Roberts who was immediately showered, in the traditional style, with the team’s water bucket once the full time whistle was blown.

The coach, who has led the team for the past four seasons, had already been drenched once when a heavy shower swept across the Dairy Field, in Llanharan, just before kick-off.

Last year the Warriors, who had been unbeaten during the regular season, stumbled at the semi-final stage when the Portsmouth Dreadnoughts scored early after their arrival in Llanharan and the hosts were never able to recover.

As the Warriors struggled to make much headway on their first possession against the Blitz, and were pushed back by the first of several offside and false start infractions that would plague both teams,  they were forced to punt but Mick Duncan’s clearance could only reach the Warriors own 34-yard-line.

Duncan’s fellow Irishman, John Bateman, stepped up for the South Wales defence with the first of several crunching tackles. That meant Blitz quarterback Aaron Butler was forced to take to the air on 3rd and 12 but his pass was intercepted by Warren Coombes.

On their second possession the Warriors’ ever reliable, and strong runner, Josh Hughes was able to get the team moving though the drive stalled, with an unsuccessful attempt to convert a 4th and 5.

Hughes was temporarily forced off with a back injury on the following Warriors possession after making another big gain but the drive was most notable for an unnecessary roughness penalty against Warriors offensive lineman Frankie Pankhurst who was ejected for fighting after apparently retaliating.

Though the Warriors offence had so far been the most productive it would be the Blitz who broke the deadlock late in the first quarter with the score essentially set up after Coombes again intercepted Butler.

The Londoners gambled on 4th and 4 but Butler’s deep pass across the middle of the field was picked off by Coombes and crucially his return to the 25-yard-line was ruled out for a block in the back.

That forced the Warriors offence to start from their own six-yard-line and saw the Blitz take the lead in bizarre circumstances when a shot gun snap hit receiver CJ Caparas as he motioned across the back field.

The ball ricocheted off Caparas’ helmet and into the arms of Blitz defender Piers Harrison-Reid who only had to stroll in to put the visitors ahead. The Warriors did however block the attempt to add the extra point.

The Warriors would eventually get on the scoreboard due to a mistake by the Blitz. The visitors had been pinned to their own 12-yard-line after an accurate punt by Duncan. When the Londoners were unable to get any joy from the uncompromising home defence they lined up to punt but the ball sailed high over the head of punter Harry Dennis and out the back of the zone to record a two-point safety for the home side and restore some confidence to the largest, and loudest, crowd of the season.

The Warriors passing game had failed to make an impact but QB Dean Jackson, on 3rd and 10, found Caparas flying down the left hand sideline for a 30 yard gain. With a first down just 21 yards from the Blitz end zone Jackson again looked downfield but he was picked off by Andre Davies at the five yard line.

However once again a mistake was followed by a further error and when Blitz receiver Ricardo Libberd fumbled the Warriors recovered and had the ball back only 10 yards from the goal line.

Despite the excellent field position, and a pass interference penalty giving the Warriors a further four downs from the three-yard-line, the hosts couldn’t punch in the score.

But on 3rd and goal Jackson rolled right and pinged a pass to the outside of the end zone which the diving Duncan caught to literally touchdown. He then added the extra point.

The 28-year-old Dubliner said the play hadn’t been designed: “It was kind of playground stuff, it wasn’t from the playbook. I took my marker inside and then turned outside and Dean put the ball where it needed to be. I was very, very happy to score.”

The Blitz defence pressured the Warriors late in the second quarter and in the dying moments found themselves just 20 yards from the Warriors goal line due to another unsportsmanlike penalty against the hosts. Butler drove his team to within five yards of scoring before the half-time whistle came to the Warriors rescue to ensure they led 9-6 at the interval.

Neither team made much progress in the third quarter but replacement QB Ryan Mcloughlin, who had to come in for Butler who took several knocks during the game, was intercepted by Adam Balsom who returned the ball to the Blitz’ 18-yard-line.

On second down Jackson looked for Caparas to the left and though the pass fell incomplete the Warriors had a first down at the five yard line due to what appeared to be a very strict pass interference call by the officials.

On the following play Caparas popped up on the right and Jackson dumped a short pass to the the receiver who needed all of his elusiveness to run in for the Warriors second touchdown which Duncan again converted.

Butler returned and his arm, and further pass interference calls, moved the Blitz downfield but the ball was turned over following a failed fourth down conversion at the Warriors 21-yard-line.

Jackson then hit Duncan for a big gain across the middle and as time expired at the end of the third quarter, and the teams changed ends, the Warriors tried to use the strong wind that was now on their backs to their advantage by allowing Duncan to attempt a 55-yard-field goal but the kick fell well short.

Once the Blitz threatened again it was Christopher Bartlett-Legge who stepped up to make another crucial interception but mistakes continued to undermine both offences and Blitz scorer Harrison-Reid recovered a fumble after the Warriors again moved to within yards of scoring.

Butler then connected with Lance Mc Beam for a big gain across the middle but when he was again forced out of the game Mcloughlin came back in but was once more picked off by Coombes and it was soon evident that despite the fairly narrow lead it would be the Warriors heading to the Southern Conference final.

Head coach Roberts praised his side’s overall game and for meeting the test from the Blitz who had also gone through the season unbeaten.

“Blitz are the best side we’ve played this year. Our defence were outstanding, we didn’t give an inch all game. The offence did what they needed to do, took care of the clock and Dean threw some lovely passes.”

Blitz defensive co-ordinator Matt Osborne, who was acting head coach for the day, said: “We were expecting a hard fight and we got a hard fight but we expected to have a little more luck on offence.

“I think we can be proud, the boys turned up and did show some real pride and kept fighting, they did the club and this team really proud.”

The Blitz B are a feeder side for the Londoners’ premiership club who also on Sunday lost their national semi-final 7-6 to northern champions Tamworth Phoenix. Three years ago the Warriors had been competing at the premiership level and Osborne said he was intrigued to see the Welshmen again.

“I was part of the Blitz development squad at the time so it was interesting to be able to come and see them play at a different level.”

The Warriors now have just under a fortnight to prepare for the Division Two Southern Conference final, against the Bournemouth Bobcats, who finished second in the south division to the Blitz, and beat top seeds the Essex Spartans 42-20 in the other semi-final.