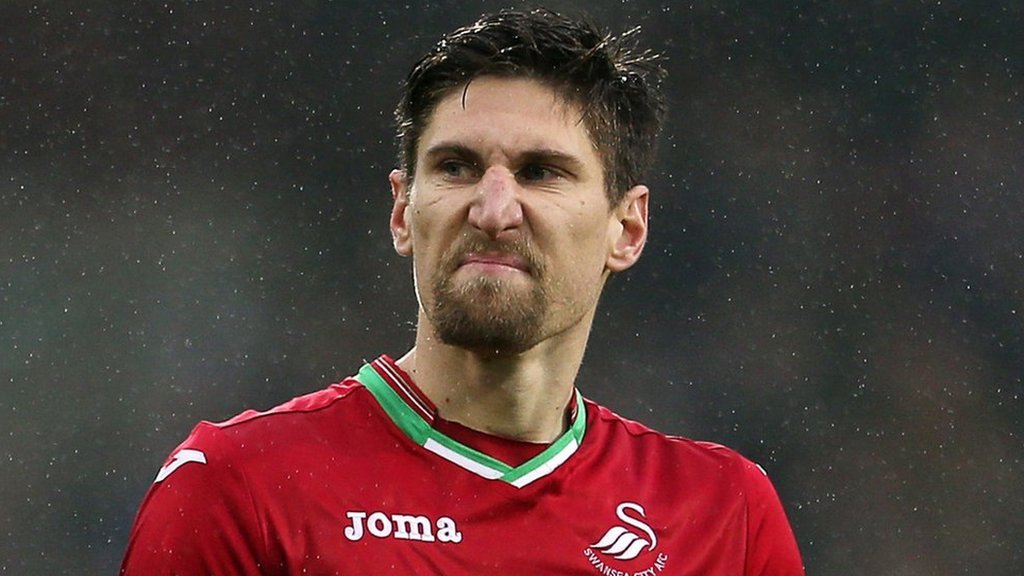 Not to be sniffed at: Federico Fernandez left for £6m.

Swansea City’s deadline day dealings left them with cash in the bank, an old boy from Cardiff City – but desperately short of central defenders.

The Swans made just one signing, taking Wales international full-back Declan John from Rangers for an undisclosed fee.

But four players left the club – three of them first team regulars from last season in Jordan Ayew, Federico Fernandez and Sam Clucas.

Ayew went to Crystal Palace on a season-long loan, Fernandez joined Newcastle for £6m, and Clucas moved to Stoke City for £8m.

It means the Swans are now left with just one recognised central defender in Mike van der Hoorn and must attempt to fill that gap, and many others, through the loan market which stays open until the end of the month.

That may prove difficult, however, with the collapse of a proposed £6m deal to bring in midfielder Greg Woods from Brentford. It is understood a loan deal was discussed, but Swansea were unable to make the figures attractive enough to their Championship rivals.

Ayew passed a medical with Premier League side Palace late on deadline afternoon and was confirmed as a Palace player shortly before the extended 7pm cut-off.

“I am very pleased to be here. It’s been a long transfer window but finally I got a move,” said Ayew.

“The important thing for me now is to get fit and to be in good shape, and I know the manager wants to use me up front and make things happen.

“The manager, chairman and sporting director all made an effort for me to be here today, so I have to thank them. I am looking forward to playing with the boys and meet the fans, and hopefully it’ll be a good season.

“I chose to come to Palace to continue improving. It’s a step up for me and I’m ready for the challenge and to get to where I think I can get to.”

Ayew top-scored for Swansea last season with 11 goals but was unable to prevent the Swans from being relegated.

Former Bluebird John is eligible to feature in Graham Potter’s squad for Saturday’s first home fixture of the campaign against Preston on Saturday, 11 August.

“It has been a busy two or three days, but I am happy to be here,” said John.

“It is nice to come home to Wales and be back close to the family. I am a Merthyr boy born and bred.

“I am excited and really happy to play under Graham Potter. I will look to try to get into the starting 11 and try and get some minutes in.”

Swedish international Martin Olsson is the only other recognised left-back in the first-team squad.

John had joined Rangers on loan from Cardiff City in August 2017 before making the move permanent midway through the campaign.

One thought on “Swansea City’s Deadline Day Discount – Ayew, Fernandez And Clucas Sold But Only Declan John Comes In”