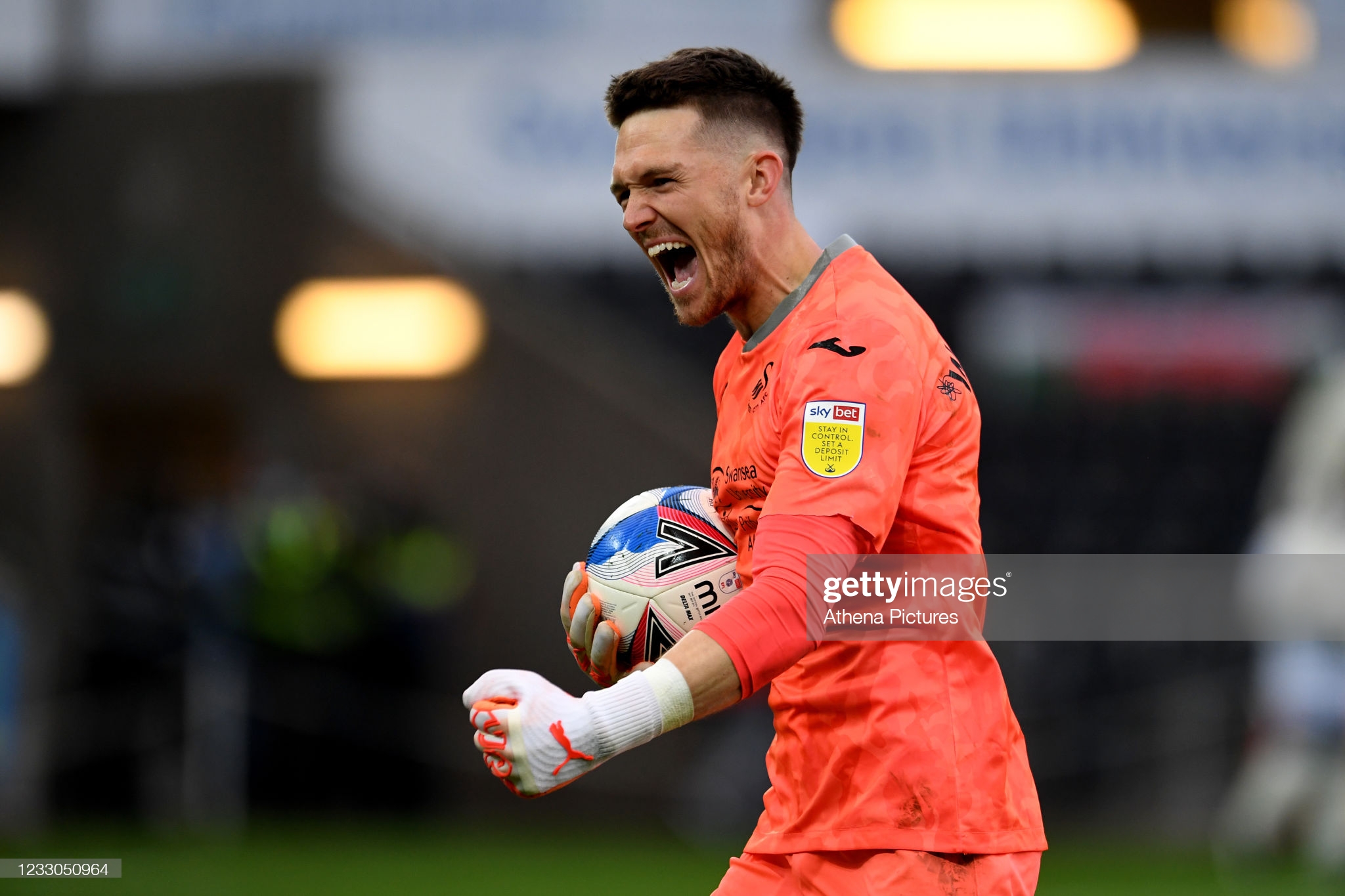 Freddie Woodman will be Swansea City’s last line of defence at Wembley today when they face Brentford in the Championship play-off final. The club’s immediate future – and £170m – could literally rest in his hands. But that’s the kind of pressure he thrives on, plus another type, as he tells Graham Thomas.

Freddie Woodman has been catching things all season – on the football field or with a fishing rod in hand – but today he hopes to land the biggest prize of his life.

If his performances in either activity this year are anything to go by, then calmness under stress should not be an issue.

The Swansea City goalkeeper has already hooked one prize, the Golden Glove award for the fewest goals conceded in the Championship, but this afternoon he has the opportunity to win a gold-laden promotion with his club who face Brentford in the play-off final at Wembley.

When the 24-year-old keeper finds time, he likes to escape the pressures of football by fishing, a passion he shares with England and Manchester City star Phil Foden.

Woodman’s regular angling partner is his cousin Nathan, who has already urged the player to bring the Golden Glove trophy and a play-off winners’ medal down to the lakes when they next meet up.

“Some people think, ‘why would you want to do that?’ But you can switch your phone off, have a chat and relax and just be with nature,” says Woodman, who is at the end of his second season on loan from Newcastle United.

“Then, the buzzer goes, there’s something on the end of your rod and your heart is pounding. That’s a moment when there’s pressure trying to reel in a big fish, just like there is in a football match.

“I know that when I used to go away with England, Phil Foden used to love talking about it and he’s a very keen fisherman. It’s just a good way to switch off and take my mind off football.”

Woodman was part of the England U20 World Cup winning team of 2017, a tournament where he excelled, landing another award for best goalkeeper after saving a penalty in the final against Venezuela.

This season, he has been one of the pillars of Swansea’s defensive effort, along with another young English loanee, the impressively mature 20-year-old Marc Guehi of Chelsea. Together, they helped the club achieve a top-rating 20 clean sheets in the regular season.

Woodman’s talent was also evident in the subsequent semi-final ties against Barnsley, where he made an outstanding double save in Swansea’s 1-0 first leg victory at Oakwell.

He conceded once in the return leg – a 1-1 draw – but also exuded a calmness in the closing moments that was missing when Swansea failed to get past Brentford at the same stage a year ago, when Woodman was injured.

Those are the moments the south Londoner says he savours, what he calls the “mayhem” of high pressure activity around his goalmouth and his instinctive response.

“I do enjoy the mayhem. My friends always say to me, ‘why were you laughing and smiling?’ and my reply is that I’m playing football. When the mayhem is unfolding and people are powering in shots, then I’m going to enjoy it. This is what I’ve dreamed of doing since I was a little boy.

🧤 Freddie Woodman’s heroics earned the #Swans a point at Pride Park on Saturday. 🧤

“It’s difficult to explain, but that emotional charge you get before, during and after a game – it’s incredible and it’s really why I do it.

“So many top athletes thrive off that feeling. I’m the same. I live for those moments. It’s a like a drug. You want it all the time.

“We have crowds back, I’m playing for a big club which has a special place in the community, and it’s all I’ve ever wanted to do.”

Woodman would be keen to remain in Wales if Swansea make the Premier League, although the club would likely need to find at least £12m if they were to buy a player still highly rated by Newcastle.

If they fail to repeat their achievement of exactly 10 years ago, when the Swans overcame Reading to make the Premier League for the first time under Brendan Rodgers, then Woodman will almost certainly head back to the north east rather than seek another loan.

“These have been two incredible seasons for me. I feel as though I have improved massively as a goalkeeper but also as a person.

“But there is one more game to go and it’s the most important one I’ve played in since I’ve been here. There is so much at stake for everyone.”

For Swansea to turn the tables on the club who beat them in the play-off semi-final a year ago, they are likely to have to keep a tight rein on another recipient of a golden award, Brentford striker Ivan Toney.

A former teammate of Woodman’s when they played together in Newcastle’s Under 23 side, Toney has scored 31 goals this season to capture the Golden Boot award in the Championship in his first season after moving from Peterborough United.

The only thing that surprises Woodman about Toney is that his parent club allowed the striker to leave.

“I know Ivan, we both played at Newcastle together. He’s a fanstastic striker. I knew he was very good back then when we were playing in the Under 23s. You look at him now and you really wonder how Newcastle managed to let him go.

“He has had a brilliant season, so I’m excited to come up against him and a very impressive Brentford side. It’s a big challenge.”

There have been no fishing opportunities this week, so Woodman has had to sooth any anxieties with his other chosen method – a good book.

He’s currently reading Shoemaker, Joe Foster’s account of the founding of Reebok, and says his reading habit was influenced by his friendship with Steve Black, the maverick Geordie fitness and performance coach who has worked across football and rugby, including with the likes of Wales under Graham Henry and England World Cup winner Jonny Wilkinson.

“Blackie offered me a lift in his car once, but there was nowhere to sit because it was too full of books,” says Woodman.

His other guiding influence is his father Andy, a fellow keeper who won a play-off final for Northampton against Swansea back in 1997 when Woodman was two months old.

Woodman senior is manager of National League Bromley and will rush from their home game against Notts County to see his son play at Wembley. He expects to make the second half.

“Football goes around in circles,” says Woodman. “It’s crazy that 24 years ago, dad was playing against Swansea and now I’m in a play-off final for Swansea. That’s the beauty of football.”

If he wins then Woodman will pick up his rod next week and head for the lakes, ignoring one piece of advice from a Swansea staff member.

“The chef here, Chris, says I should try some sea-fishing down in Mumbles, but I’m happy fishing for carp. The sea looks a bit rough for me.”