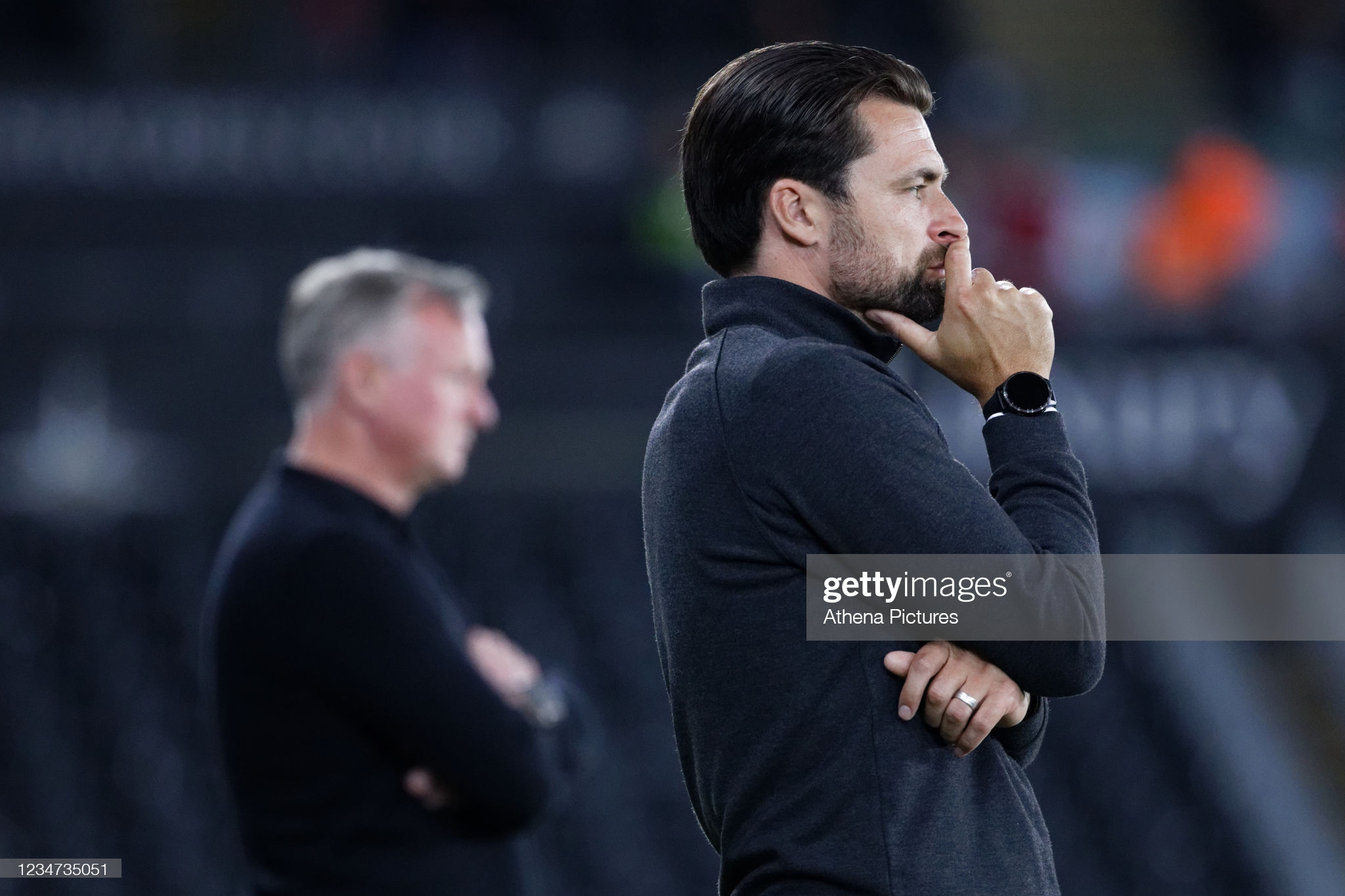 Russell Martin has claimed the reason Swansea City’s players are not fit enough is because of their disrupted pre-season.

The Swans head coach claimed a summer of upheaval is taking its toll as his team crashed to a 3-1 home defeat to Stoke City on Tuesday night.

The protracted departure of Steve Cooper, the cancellation of pre-season fixtures due to Covid-19, and the unsuccessful pursuit of other candidates before the club turned to Martin all combined to leave the squad underprepared for the start of the Championship.

The Swans eventually left themselves less than two weeks for Martin to work with his new squad and so far they are yet to gain a victory after three matches.

A defeat at Blackburn Rovers, a draw with Sheffield United, and the loss to Stoke means the Swans have a single point and are currently 21st in the early Championship table.

“The most disappointing thing for us as a group is that we conceded from two set-pieces.

“There was a mistake in there. I can accept the mistake, but that’ll happen less and less the more conditioning we get. The set-pieces hurt.

“There was not much between the two teams. If anyone tells you any different, I would disagree with them. It was a really competitive game.

“We had a lot of control. We didn’t start very well and the guys were tired.

“This was our biggest fear before the game. We are not quite conditioned well enough to play the way we want to play, but we’ll get there.

“The pre-season was disrupted so I don’t want to be disrespectful to anyone, but they are not as fit as they should be or they can be for our way of doing things.”

It leaves Stoke second in the table, level on points with leaders Fulham after two wins and a draw in their first three games of the season.

Powell headed home for a deserved Stoke opener as Swansea toiled in the first half.

Clucas doubled his team’s advantage and celebrated by taking off his shirt and showing the name on the back to the Swansea fans who booed him loudly.

Leo Ostigard slammed home a third from close range before Piroe struck for the hosts.

The striker had been brought on to replace Yan Dhanda after just 38 minutes as Swansea endured a poor first half.

“But that isn’t the case. We have a long season to get a lot of things right, but what I have seen in two weeks from the players is an incredible willingness to try to do what we want them to do, a real togetherness in the squad and in every single game we have been really competitive.

“This team will be capable of a lot when we get conditioned to the way we want to play, we get some key players back and we help them out with some additions.”

Stoke manager Michael O’Neill hailed his team’s unbeaten start to the new season and said: “I’m delighted with both the performance and the result. The first 25 minutes were excellent and we dealt with a good team.

“I don’t think we created too many chances, but we got the goals at the right time. We were comfortable until they scored, but I thought we saw the game out pretty comfortably.

“It’s a great three points for us. This is quite a new team with new players who are young. There has been quite a big turnaround in terms of the age profile of the squad.

“Joe Allen and Sam Clucas both had excellent games. We are only three games in so there is a lot of work still to do.

“I thought Sam played very well first of all. The two eights we had were very effective and they had good energy in the middle of the pitch.

“He enjoyed his goal and it was a calm finish. The celebration might cost him because he got a yellow card.”