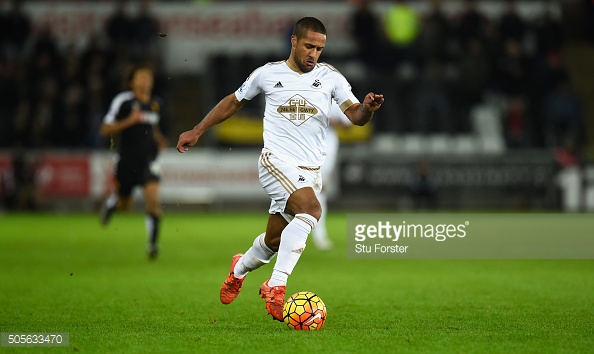 Wayne Routledge has agreed to re-sign for another year at Swansea . Pic: Getty Images.

Wayne Routledge has re-signed for another year at Swansea City – less than a week after the club announced his departure.

The 34-year-old has agreed to stay on at the Liberty Stadium as a senior pro to try to bring through the new generation at the cash-strapped club.

The veteran of 260 games in all competitions for the Swans, including 26 as they finished 10th in the Championship in their first season after being relegated from the Premier League, Routledge’s old contract expired at the end of the season.

He joined Swansea from QPR in the summer of 2011 and played in all seven seasons in the Premier League.

“It’s great that Wayne has decided to stay. I had a few chats with him and we can do with his experience next season,” said former team mate Leon Britton, the newly appointed football adviser to the Swansea board.

“He has still got a lot of offer both on and off the field and all the young players at the club will be pleased to hear this news.”

While Routledge is sticking around, Swansea are bracing themselves for the impending departure of Dan James. The Welsh international is set for a £15m transfer to Old Trafford and club chairman Trevor Birch isn’t ruling out further departures.

“If the Dan James thing happens then there might possibly be one or two more. But I can’t see a fire sale of players,” said Birch.

“If someone comes in with an offer that is sensible and proper player trading then you would have to think about that.”

But while Birch is determined to keep hold of the clubs main assets this summer, there are a few players returning from loan periods he has to move on. The Ayew brothers, Jordan and Andre, along with Spanish striker Borja Baston, are still on the books on Premier League wages.

“It is a given that we have to get them off the pay roll. Anything else we receive on top will be a bonus, but their wages are potentially crippling the club,” added Birch.