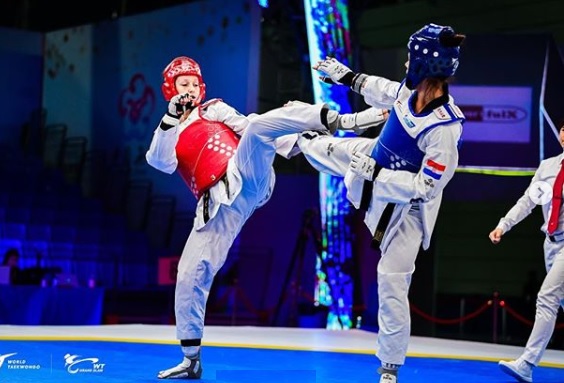 Lauren Williams is on course for a $70,000 (around £54,000) jackpot after coming through her first fight at the World Taekwondo Grand Slam event opened in China.

The 19-year-old from Gwent beat Croatian rival Doris Pole 10-8 to reach the last eight in the -67kg weight division in Wuxi.

Williams, who is in action again on Friday, is part of an 11-strong GB team competing in taekwondo’s richest tournament which also includes double Olympic champ Jade Jones.

“There is not a lot of money in taekwondo so to have this prize money gives athletes extra goals and ambitions,” said double European champion Williams.

Williams said in the build-up to the tournament that she would pay off her parents mortgage if she banked what would easily be the biggest cheque of her career.

The former kick boxer loved in a caravan with her men when she first joined the GB academy in Manchester as she was too young to live in a house while her Dad stayed back in Blackwood.

Williams said: “I have always wanted to help them and that money would go to them before myself.

“It’s an incentive but we go there to have fun, put on a spectacle and, if I won, I would seriously consider paying off my parents’ mortgage.”

Williams, ranked fourth in the world in the -67kg division, has had a roller-coaster year winning bronze and silver at the first two World Taekwondo Grand Prix events.

She then won the title on home territory in Manchester in October before losing out in the quarter-finals at the Grand Prix final in Fujairah.

“It has been a rollercoaster,” Williams, reflecting on her results since the departure of coach Paul Green at the end of 2017, told BBC Sport.

“I’m quite harsh on myself because I felt I have done terribly, but on reflection it has been a positive year with Manchester the highlight.

“It is the final competition of the year, so there’s one big final push and then I can have some time off for Christmas.”

Flint fighter Jones starts her bid for the top prize on Thursday in the -57kg category.