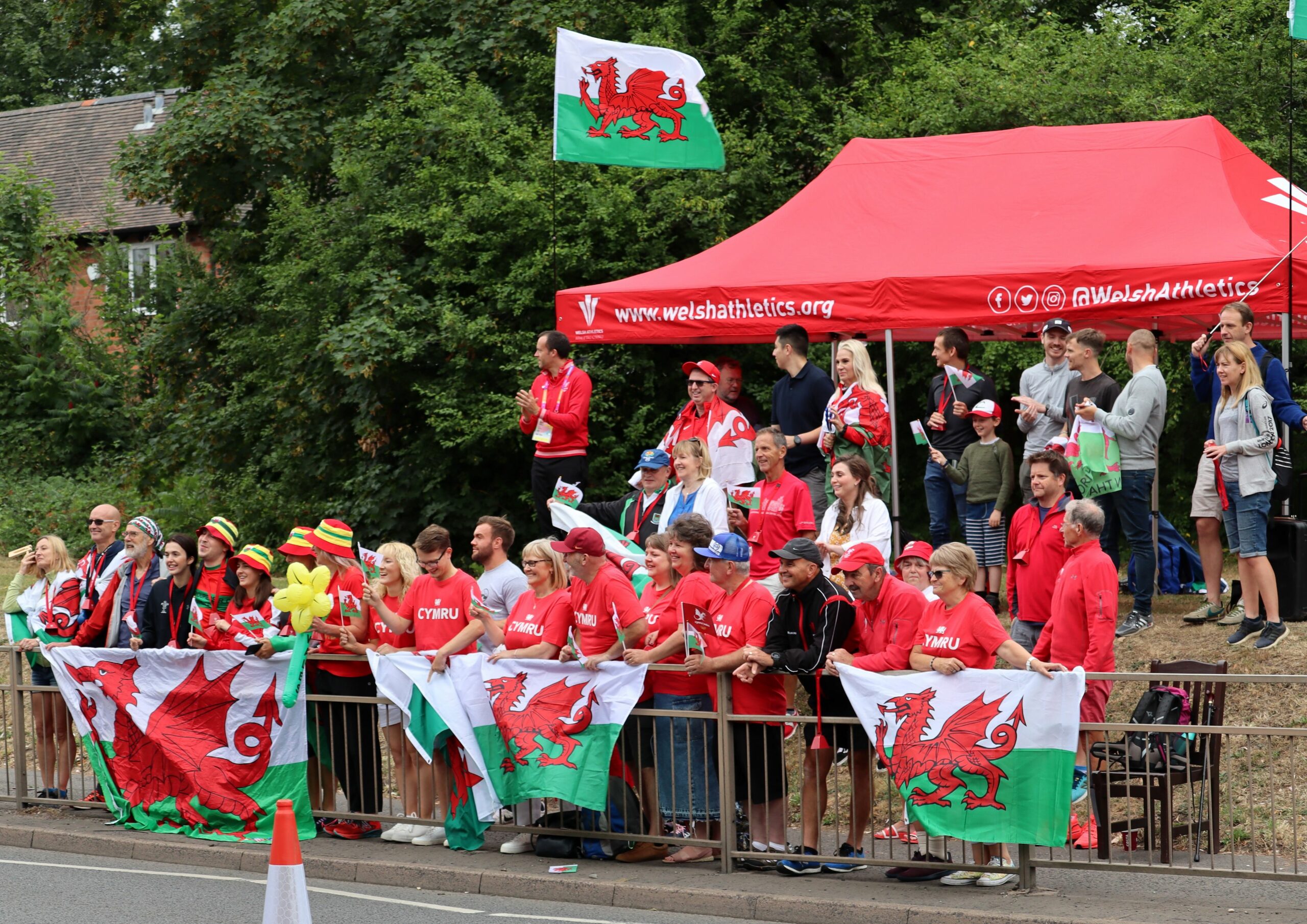 Ever since Birmingham was announced host city of the 2022 Commonwealth Games, would-be Team Wales members have been anticipating the thrill of competing in front of friends, families and supporters.

With Welsh Government having ruled out a bid to host the event for the foreseeable future, this is the closest our current crop of sports stars will get to a home games.

And so far, the excitement at the prospect of being cheered on by an army of Welsh supporters making the relatively short trip across the border to bolster the Midlands’ considerable exile community hasn’t disappointed.

One of the most spectacular examples of the level of Welsh support in England’s second city came on the men’s and women’s marathon course last Saturday morning.

Inspired thinking by Welsh Athletics saw a “cheering station” set up on a non-descript mound of parched grass at the side of Pershore Road in Birmingham’s suburbs.

The sport’s governing body had also arranged a supporters’ coach which travelled up from South Wales on the morning of the race.

Welsh supporters were invited to congregate at the small patch of land – carefully selected as each of our three marathoners would run past a total of four times on a looped section of the course which started and finished in the city centre.

By happy coincidence – possibly – the Welsh “cheering station” happened to be situated precisely opposite the welcoming Selly Park Tavern.

The perfect “drinks station” for thirsty Welsh supporters – just a few hundred yards away from the athletes’ official re-fuelling point on the course.

It was certainly thirsty work as dozens of Welsh supports quite literally cheered everything that moved on Pershore Road.

Anyone who broke into anything quicker than a brisk walk was greeted with a cacophony of noise generated by a combination of cheers, cowbells, air horns and enthusiastic applause.

Leisure cyclists, joggers and even enthusiastic dog walkers were roared on as they negotiated their normally peaceful early morning constitutional.

With the day’s para marathons having started shortly after 7pm, this wasn’t the morning to try and have a Saturday morning suburban lie in with the Welsh in town.

But if the atmosphere had been enthusiastic for the para athletes and day to day pedestrians, the volume was turned up to 11 when Dewi Griffiths – the first of Welsh athletes strode into view in the distance.

The Swansea Harrier hails from the Carmarthenshire village of Llanfynydd, and it felt like a sizable chunk of the community was roadside in Selly Park, clad in red t-shirts with Cymru on the front and #Team Dewi on the back.

They included Griffiths’ long-time coach Kevin Evans, who has guided the seven-times Welsh cross-country throughout his career.

A broad smile broke out over the face of Wales’ second-fastest ever marathon runner as he ran through a tunnel of Welsh flags echoing with cheers and cow bells.

You could easily have been transported to the colourful chaos of a Pyrenean mountain stage at the Tour De France.

Every time Griffiths passed by the Welsh erupted into cheers. When he’d disappeared into the distance for the final time on his way to the city centre finish, the Llanfynydd contingent retired to the Selly Park Tavern to watch the end of the race on TV.

When their hero crossed the line in 2:17.58 for a creditable 11th place, the huge cheer inside the pub could clearly be heard up and down Pershore Road.

There wasn’t much time for celebration inside the hostelry as Griffiths’ team-mates Natasha Cockram and Clara Evans were already heading for Selly Park in the women’s race.

And there was once again a roar as Pontypridd Roadents athlete Clara Evans ran into view at the front of the race-lleading pack which also included Welsh marathon record holder Natasha Cockram, of the Micky Morris Racing Team.

Like Griffiths, Evans and Cockram were greeted by massive support from the Welsh contingent – which included Evans’ parents Peter and Sylvia who had travelled up from Herefordshire.

The attendance at the cheering station had by now been bolstered by a group of young Albanian men, who were joining in the fun by enthusiastically waving Welsh flags and cheering on our athletes.

While some of the those sporting the now familiar red, yellow and green bucket hats made famous by Welsh football fans had attracted the attention of a local news film crew and were also having selfies taken with the West Midlands Constabulary’s finest.

And it wasn’t just the red-vested competitors getting the support of the Welsh fans, every elite group which passed were encouraged on their way – especially the distant back markers in both the men’s and women’s races from such far flung places as the Solomon Islands and Tanzania.

It’s no coincidence the Commonwealths are known as the Friendly Games and the infectious carnival atmosphere generated by the Welsh fans seemed to spread along Pershore Road as the event drew to a close.

Evans, who ran her first marathon in March of last year, was the first home nations runner to finish in the women’s race as she crossed the line in a hugely impressive ninth place in 2:38.03. Cockram finished in 11th place, stopping the clock in 2:40.09.

Evans said afterwards: “It really helped with the Welsh cheering. That really picked me up on the way back and all my family and friends were there. It was just really nice to see familiar faces.

“And then coming to the finishing, I’ve never seen a crowd like it. It was so good, it just really picks you up when you’re struggling.”

Of course, it’s not just on the streets of Birmingham where Y Ddraig Goch, inflatable daffodils and countless bucket hats have been spotted at the rugby, bowls, gymnastics and just about every other venue.

Welsh fans drowned out their counterparts from India, Scotland and New Zealand in a cheering competition before the evening session at the women’s hockey on Saturday night.

The event also witnessed a banjo-playing supporter kitted out in a sheep costume, who sang over the microphone for the event MC in what is becoming an increasingly familiar accent in and around Birmingham.

Non Stanford also spoke of the support she received as she brought Wales home for a brilliant silver medal in the mixed relay triathlon held in Sutton Coldfield.

Although it’s not just the Welsh who are spreading the love by cheering for nations other than their own.

Stanford, who had also competed in the individual race last two days before said of the support: “Unbelievable. They were even better than Friday. There was not just cheering for England, everyone was also cheering for Wales. It makes a huge difference.

“Coming round the corner, I saw someone in an England kit screaming for me and I thought ‘I’ve got to do it.”

Win or lose, one thing’s for sure, Team Wales won’t be lacking in support during Birmingham’s staging of an event which is certainly living up to its reputation as the friendly games.