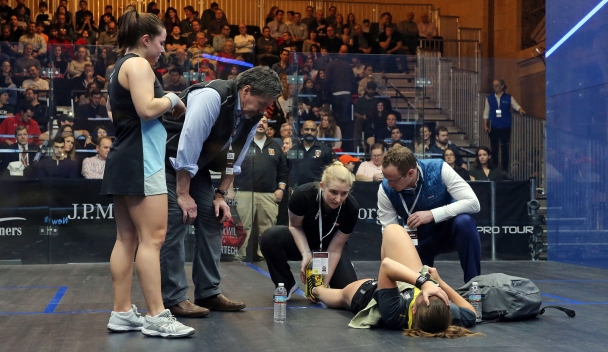 Tesni Evans returns to the court for the first time since January as squash makes its own comeback at the Manchester Open.

Wales’ world No 9 has only had 17 minutes of court action this year due to injury and then COVID-19.

Evans has not played since suffering the ankle injury in the second round of her match in the Tournament of Champions match when she, unfortunately, collided with opponent Olivia Blatchford Clyne in New York.

But she will return in the first round of the Manchester Open – which started on Wednesday (without fans) with Joel Makin in action later – on Thursday.

"We're absolutely chomping at the bit" 😬

🏴󠁧󠁢󠁷󠁬󠁳󠁿 @tesnievans has had an even longer break than most after her ankle injury, and she can't wait to get started at the Manchester Open

“It was very frustrating,” said the 27-year-old Rhyl based player recently. “Having only played three events in the first half of the season, I was really looking forward to getting stuck in at the Tournament of Champions.

“It’s a great event and after having a really good solid training block leading up to it, I was really eager for a competition for it to last less than ten minutes.

“So it was a very frustrating moment for me, but you know, being a professional athlete, you have to be prepared that injuries are going to happen.”

Evans’ goal for this year was not only to consolidate her top 10 ranking but push on and break into the top eight. With all the inaction due to COVID she remains nine in the world.

She added: “I always had a big goal of being a top ten player and I’m really happy I have showed some consistency to hold that ranking of World No.9 for over a year.

“But, on the other hand, I am disappointed that I haven’t been able to progress more towards those top eight players and move my ranking up, so plenty of work needs to be done to try and crack the top eight!”

Evans reached the final of the Manchester Open last year when it was a women’s only event before losing to Joelle King.

The Cardiff-born player, seeded seven this year, will face Egypt’s world No 26 Zeina Mickawy in the opening round.