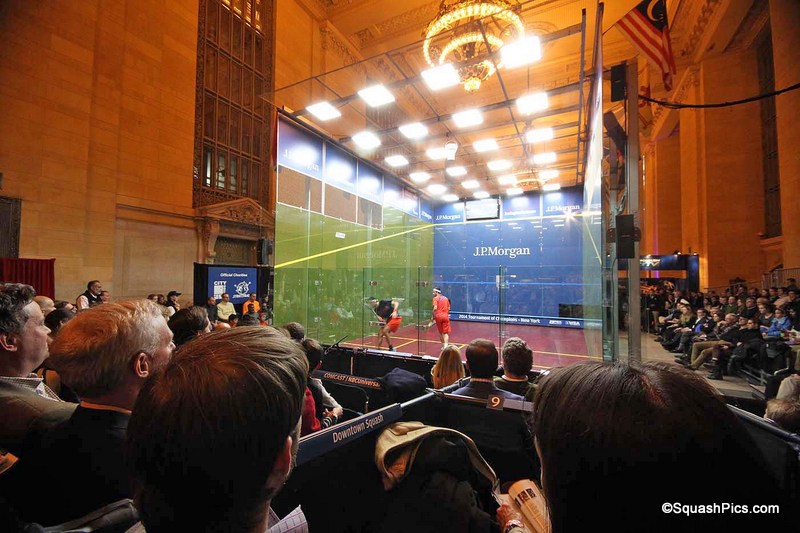 The setting in New York for the JP Morgan Tournament of Champions.

Tesni Evans hopes to play her part in bringing New Yorkers to a standstill when she plays her first match at the JP Morgan Tournament of Champions this weekend.

The Welsh No.1 – who broke into the world’s top 10 on the back of stunning performances in America last year – rates the event as one of the sport’s best due to its iconic location.

Imagine a glass squash court dropped into the main passenger concourse at Waterloo train station during rush hour and you get an idea of the impact made by hosting the championship at New York’s Grand Central Terminal.

The matches go on as thousands make their way to the trains alongside 42nd Street and Evans says: “There are people going about their business and they will just stop and stare.

“They just see the court and they want to know what’s going on. So, we’ll have commuters, tourists, and everyone else constantly walking past the front wall of the court.

“It can make it very distracting and there’s a lot of noise compared to other events.

“You really need to have good concentration levels when you play, but I love the venue and it’s a fantastic way of getting publicity for the tournament and for the sport.”

Evans is not the only Welsh player at the tournament with the men’s draw having already begun and a first round victory achieved for Joel Makin.

Both Evans and Makin share the same coach, former Welsh No.1 David Evans, who is with both players this week after extra funding was secured in order for him to make the trip.

“It’s a massive benefit to have David out with me,” says Tesni. “He knows how I play, inside-out, and the best way for me to prepare. But he’s also got a pretty good knowledge of the other girls I’ll be playing as well.

“It will be a great help having him around for the week and knowing he is in my corner.”

Seeded at No.8 and given a first round bye, Evans begins her campaign on Sunday with a game against the winner of the clash between England’s Millie Tomlinson and Amanda Landers-Murphy of New Zealand.

She is then scheduled to meet world No.9 Alison Waters – one place above Evans in the global rankings – in a battle for a place in the quarter-finals.

It was in the USA in October, that Evans made the impact that propelled her into the world’s top 10 when the 26-year-old reached the semi-finals of the US Open.

That surge included a stunning win over world No.6 Sarah-Jane Perry before she was eventually beaten by the world’s top ranked player, Raneem El Welily.

A return to that form and a few players ahead of her in the rankings will be looking anxiously over their shoulders.

“I love playing in the States. Apart from playing at home in the UK, it’s probably my favourite place to play.

“They always get good crowds who get really into it and New York is such an interesting place with so much to do.

“I’ve got good memories of America from last year, so hopefully it can go well again.

“I am seeded to make the quarter-finals and so I’d love to do that or maybe make another semi-final. That’s the aim.

“I’ve never made the quarter-finals of the Tournament of Champions, so I’d love that. But there are lots of quality players in the event so it’s going to be a tough week.”