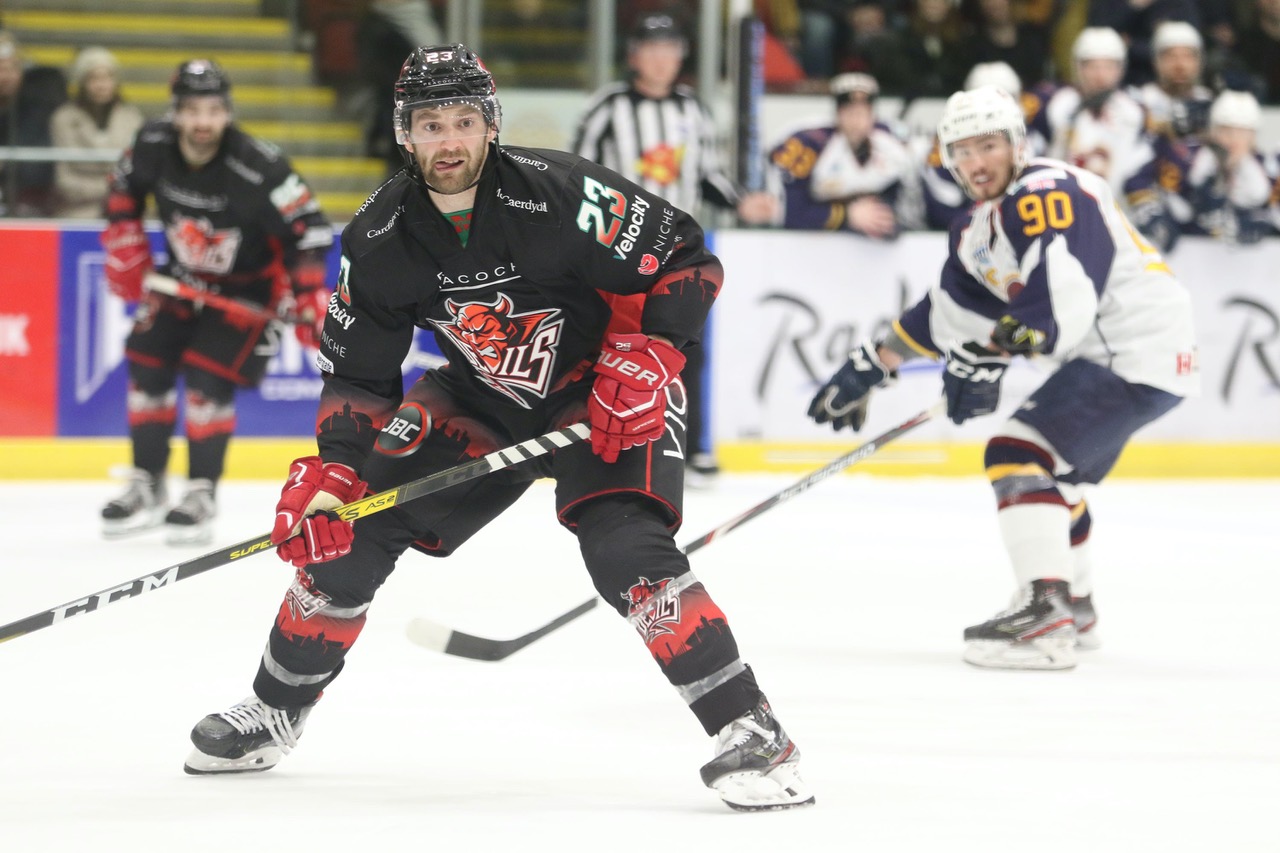 Cardiff Devils are in Coventry today aiming to complete a six-points return from three Elite League matches in five days.

Captain Joey Martin and his team follow wins against Fife Flyers 3-2 and Guildford Flames 4-2 on Saturday by taking on Coventry Blaze in the English Midlands.

Devils are one point behind leaders Sheffield Steelers with three games in hand, while Nottingham Panthers and Belfast Giants are also both still in the title chase.

“It was a good, solid team effort against Flames,” said Cardiff head coach Andrew Lord, who celebrated his 35th birthday one Saturday, “From Ben Bowns all the way out the players did well.

“We were hard to play against and this was one of the more physical games of the season. I liked our compete at both ends of the ice and our togetherness.”

Powerful forward Josh Batch and Flames’ Corbin Baldwin dropped the gloves during the first period and were both handed five minute major penalties for fighting with Batch given an extra two minutes for holding.

Just 18 seconds into the penalty kill, Stephen Dixon was called for checking from behind and thrown out of the game. He was later suspended for two matches by the Department of Player Safety and will miss Sunday’s match against Coventry and next Saturday’s fixture at Nottingham Panthers.

Devils rested Charles Linglet and Mark Louis from the match against Flames at the Viola Arena in Cardiff Bay.

Blair Riley opened the scoring for Devils against Guildford at 16-40 with assists going to Joey Martin and Sam Jardine.

The next shift Batch and Baldwin go toe-to-toe before Dixon was dismissed.

Devils killed the rest of the first period off including nearly two full minutes of a 5 on 3 advantage for Guildford, but then 46 seconds into the middle period Flames levelled the score with a blast from Calle Ackered.

Evan Mosey fired Devils ahead again from Martin’s pass, shooting the puck low past Wouter Peeters in net for Guildford (34-31).

Devils’ powerplay extended the lead to 3-1 when Matt Pope found Gleason Fournier, who sailed a wrist shot through traffic at 42-19.

Joey Haddad picked up a rebound after attempts by Sam Duggan and Josh Batch were both stopped to score his 28th goal of the season and give Devils a commanding 4-1 lead.

In the dying minutes Flames pulled one back on a power play when Ian Watters netted with 41 seconds left, but Devils saw out the last minute to take the 4-2 win.

Goaltender Ben Bowns was man of the match for Cardiff, making a number of big saves amongst the 31 shots he faced.

Haddad finished with a goal and an assist, while Martin earned two assists.

The #EIHL Department of Player Safety has suspended @cardiffdevils' Stephen Dixon for 2️⃣ games following a checking from behind incident in the game 🆚 @flamesicehockey on 22/02/20.