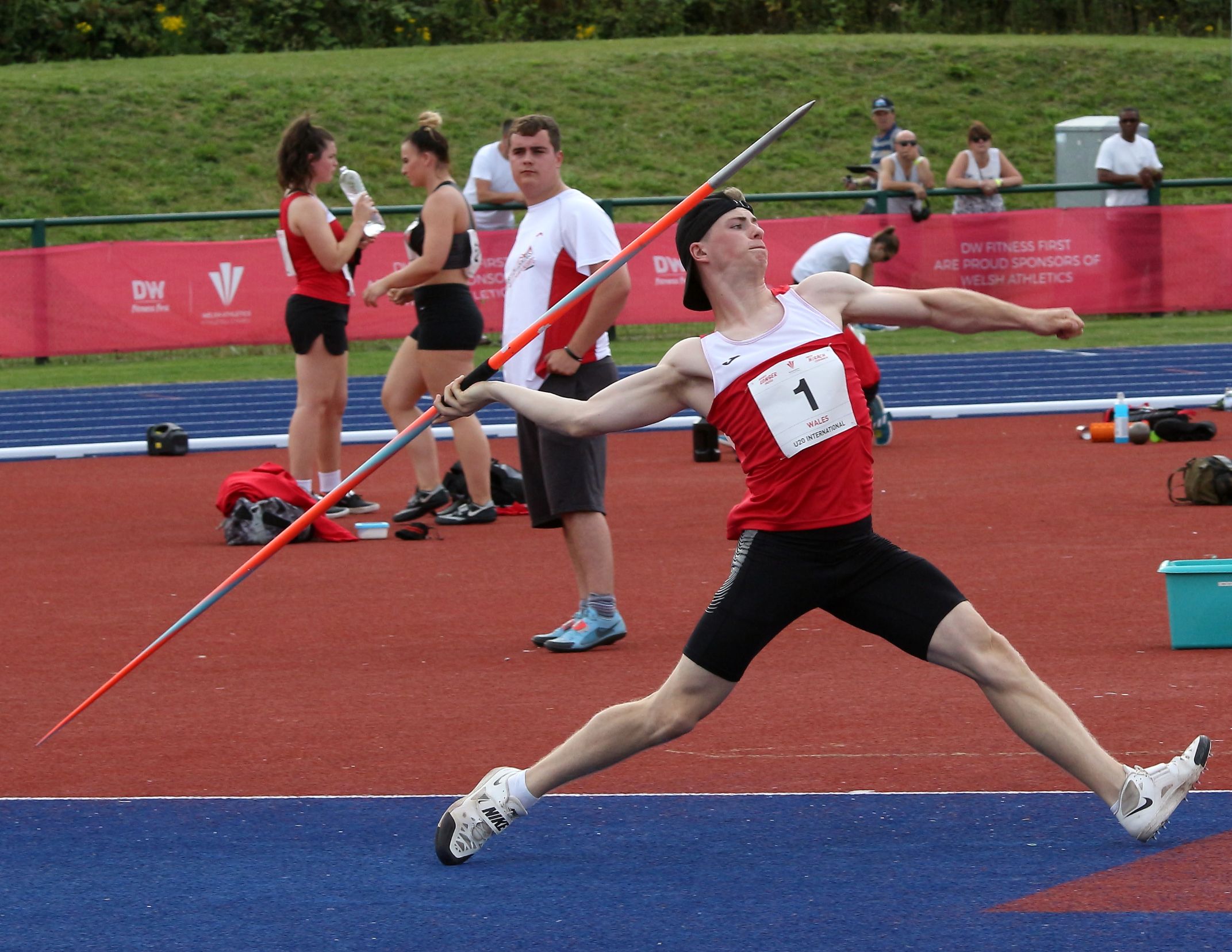 The throws, jumps and sprints national development programme day in Cardiff is off. Pic: Owen Morgan.

Rising Welsh javelin star Tom Hewson celebrated the news of his first Great Britain senior call-up by breaking the meeting record at the annual Welsh Athletics Under-20 International in Cardiff.

Hewson was named in the Great Britain senior squad for next month’s European Team Championships Super League in Poland on Wednesday afternoon.

By the evening he was earning maximum points for Wales by winning the javelin and breaking his own meeting best with a throw of 67.85m.

On a warm still evening in the capital, Hewson said: “I’m very happy with how I’ve thrown today. It’s not as far as it could have gone but with the conditions and everything I’m perfectly happy with that.”

The Andover athlete has been in excellent form in recent weeks having broken the 70-metre barrier three times at the English Schools Championships, the furthest of which was a new personal best of 70.80m

The 18-year-old is aiming to improve on that distance when he makes his Great Britain senior debut out in Bydgoszcz between August 9 and 11.

Hewson added: “Hopefully, I’m looking to go a little further. It didn’t happen today, but I’ve got the European team champs in a couple of weeks. It’s just been announced today, I’ve been selected for my first senior British vest.

“I can’t wait, it will be a great learning opportunity for me. It’s my first senior vest, competing on the international stage for Great Britain.

“It’s a great opportunity for me to throw against some of the best throwers in the world.”

Hewson’s performance was one of a number of Welsh highlights on a remarkable night of athletics during which 12 championship records fell to athletes from Wales, Scotland and the English regions.

An already vintage summer for Welsh sprinting continued in the 4x100m relays as both the home men’s and women’s teams chalked up last gasp victories.

The Welsh women’s quartet of Emanuella Kone, Moli Jones, Gabrielle Fakande and Issie Tustin led the way when they produced a breathless victory in the final few yards.

Trailing as they entered the final 100m, Cardiff’s Tustin produced a storming last leg to snatch victory from England South on the line in a time of 47.97.

And the Welsh men’s team repeated the feat, with England Midlands this time suffering at the death as Owain Lloyd Hughes finished off the good work of Thomas Payne, Eli Onyewu and Zachary Price to clock a winning time of 41.46.

It was an excellent evening for Neath speedster Lloyd Hughes, who went on to produce a brilliant run in the 200m, where he once again harvested maximum points for Wales, winning in a time of 21.40.

Swansea Harrier Fakande also shone in the individual 200m where she finished second in an outdoor personal best of 25.21 behind England South’s Kiah Dubarry-Gay, who broke the meeting record with 24.68.

There was also a second place for promising Cardiff middle distance athlete Ben Reynolds, clocking a new personal best of 3:54.58 finishing second to England South’s Tom Eames, who smashed the meeting record with 3:51.35.

The international match, which featured teams from Wales, Welsh Schools, Scotland, Northern Ireland and the three English regions, was won by England South, who retained their title.

Full results are available on the Welsh Athletics Website.