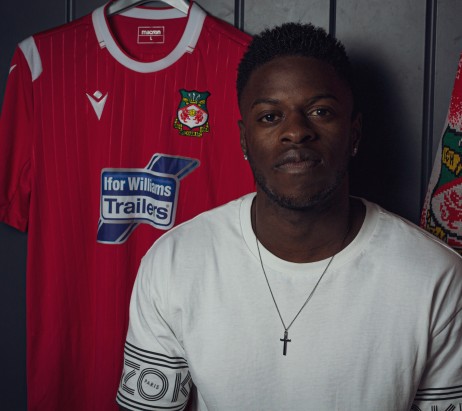 Manager Bryan Hughes and his Wrexham team make their longest Vanarama National League away trip of the season when they play Dover in Kent this afternoon.

The Dragons have earned four points from their first two fixtures, beating Barrow at home and drawing 2-2 at Boreham Wood.

“Overall, I’m looking for us to improve our away form year,” says Hughes. “We went a long way towards doing that in midweek and now it’s about trying to be consistent.

“Fixtures come around thick and fast, but we travel to Dover in a positive frame of mind.

“Every away game is going to be tough this season for every team. Our aim is to try and pick up a few more points this year on our travels while maintaining home form.

“It’s always nice when you see new signings scoring goals. We are trying to play with a bit more of an attacking threat, but, on the flip side of that, we are going to concede goals.

“We prided ourselves on clean sheets last season, but didn’t score enough goals.

LOANED OUT | Good luck to Jack Thorn who has joined @NewtownAFC on-loan.

“My message from day one has been to be more ruthless in front of goal. We had a chance to make it 3-0 at Boreham Wood and that would probably have killed the game off.

“But we didn’t take it and will learn from that. They didn’t break us down and we conceded two sloppy goals.

“I’d like goals spread all the way through the team, but the main thing is for the forward players to score those early goals and feel that confidence boost straight away,” he said.

“Bobby, JJ and Mark Harris have all scored now. I don’t want Bobby and Mark to be wingers, I want them to be playing inside the structure, where they take up positions to hurt teams.”

Hughes says Akil Wright is training again after a virus, while goalkeeper Rob Lainton is a couple of weeks away from fitness.

On the opening day of the season, Dover travelled to the Proact Stadium to take on Chesterfield and won 2-1.

In midweek they went down 2-1 against Dagenham & Redbridge.

Dover’s Alfie Pavey is joint-top goal scorer in the National League with three goals in his opening two games.