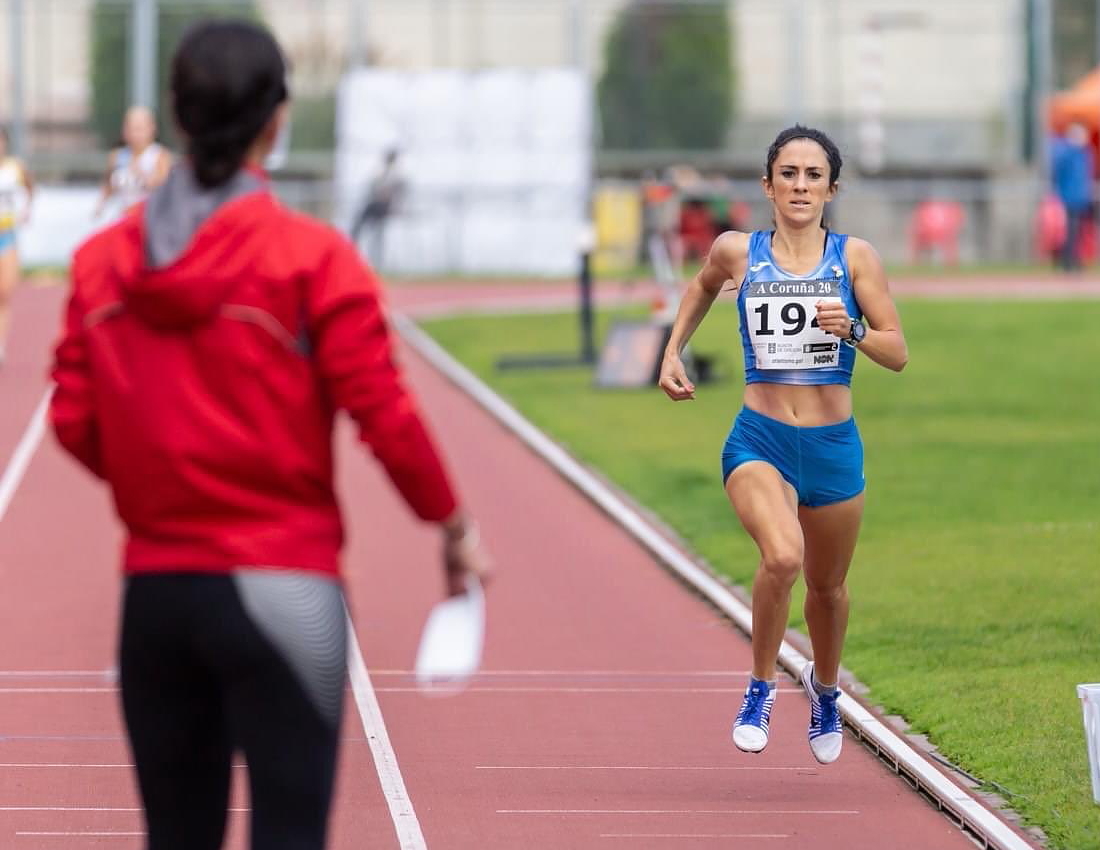 An official waits to hand over a mask to Angharad Davies as she wins the 800m at the Galician Championships. Pic: @ollodexan

Davies, who lives and works in Spain, also smashed her personal best times for both distances on Saturday.

The double is a remarkable achievement for Davies, who was unable to exercise outside for seven weeks during the height of Spain’s stringent COVID-19 lockdown.

Although Davies was first in both the 800m and 1500m she wasn’t able to take her place on the top step of the podium as she is not a native of Galicia, an autonomous community of Spain with a population of around 2.7 million.

However, there was no denying the quality of her performances as she won the 800m in a PB of 2:13.02 – six-and-a-half seconds clear of her nearest rival.

Later the same afternoon, running for the Marineda Atletico Club, Davies won the 1500m in 4:32.42 – another big PB and almost seven seconds ahead of runner-up Angela Gonzalez Fernandez.

Despite competing so far from home, the fluent Welsh speaker is proud of her Carmarthenshire roots and wore a Yes Cymru badge pinned to her vest. The times make her the sixth fastest Welsh woman over 800m and fifth fastest over 1500m this year.

Davies’ form during 2020 is all the more remarkable considering she had not raced since January 2017 before making her comeback in December of last year.

In February of 2020, just three months after making her comeback, she reached the 800m semi-finals of the Spanish Indoor Championships.

Then came lockdown, which meant no more outdoor exercise due to Spain’s restrictions.

Davies said: “Just when I was getting back on track in February, we got locked down completely and I was stuck in the flat for seven weeks without being able to run at all.

“So I think the desire to get back out to run meant that I’ve really made the most of training since May.”

When racing restarted in Spain, Davies decided to make the most of any chances to compete.

“It’s the first time I’ve ever doubled up the 8 and 15 in one day, and I was a little bit apprehensive, but I’d been feeling strong in training so my coach and I decided I’d give it a shot.

“I felt strong in the 800m, running a PB and just missing out on dipping under 2:13. In the afternoon it was just a question of seeing what I had left in the legs for the 1500m.

“Being ineligible for medals at the Galician championships meant I just had to run hard and see what I had in the tank against a couple of strong competitors.

“I didn’t expect to feel as good as I did but I could feel the other girls dropping off as I kicked on early, fearful that the legs would run out of gas at any point, but they didn’t.”

Davies had been unable to run competitively for almost three years due to niggling injuries and work commitments as she travelled the globe with Hawk-eye Innovations, the company behind supplying football’s Video Assistant Referee (VAR) and similar technology for many other sports.

When Hawk-eye won the contract to supply VAR technology in Spain, where she had previously worked as an English teacher, Davies saw an opportunity to cut down on her travelling and return to running.

Following her appearance at the Spanish Championships n February, the Llandovery athlete had been looking forward to continuing her comeback during the outdoor season, but COVID-19 intervened.

However, earlier this month, Davies ran a four-second 800m personal best at a meeting in Ourense in Spain.

Davies said: “Given what we’ve had to contend with here in Spain since our last races in February, I feel really lucky to have been able to return to racing, albeit under very strict restrictions.”

Those restrictions include wearing face masks immediately before and after races and running entire 800m races in lanes.

In the 1500m, the first 200m must be run in separate lanes. After that, any overtaking must be carried out with at least 1.5m separation between athletes.

“Not an easy thing to do on the track,” says Davies. “Probably the reason why I thought it less complicated to just front run from the word go!”

Despite the unfamiliar racing conditions, Davies is just delighted to be back running and enjoying the form of her life.

“I know there are many athletes that aren’t able to transfer their training into results at the moment but hopefully that time will come sooner rather than later,”

“I’m enjoying my running at the moment and when it translates into big PBs it just makes it all the more special.”

Now Davies is hoping to lower her PBs further by travelling further afield to compete, as long as the COVID-19 restrictions in Spain allow.

“Hopefully the results at the weekend mean I will have a chance to run in the Galician team at the Inter-regional championships in Ciudad Real in mid-September, if they go ahead.”