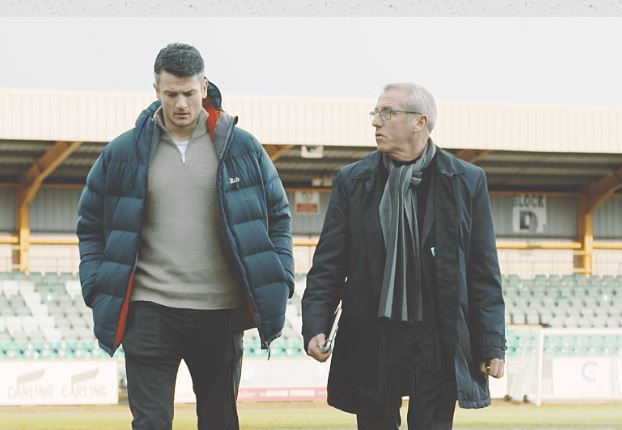 The former Wales and Swansea City midfielder will be in the dugout at Salford City FC’s Peninsula Stadium as the best Welsh players from the JD Welsh Premier League take on their English non-league counterparts from the Vanarama National League and below.

The game will be shown live on the Sgorio Facebook page at 7.45pm on Tuesday March 19.

The following night, Owain will be at the Racecourse in Wrexham as part of the Sgorio team which will bring live coverage of the international friendly match between the Wales first team and Trinidad Tobago, at 7.25pm on Wednesday 20 March.

The seven-cap former Wales international said: “It wasn’t easy to choose the squad, but we’re quietly confident that we have a strong squad.

“We’ve come up with a squad of 19, with another two young players, but there are at least 10 other players that were close to being selected who are quite unlucky to miss out.”

Jones was also the assistant to Mark Jones for the ‘C’ team’s reintroduction last season, as they went down 3-2 against their English counterparts in a highly competitive affair at Barry Town United’s Jenner Park.

He added: “England ‘C’ is a well-established team and a lot of their players then go on to play professionally, and that’s what we would like to offer to our young players.

We catch up with the Wales ‘C’ manager ahead of Tuesday’s clash with England ‘C’.

“We have a duty to help players who could make the step up to a higher level. The New Saints defender, Connel Rawlinson, was our captain last season and he has since signed for Port Vale in League Two, where he plays regularly now.

“The game against England ‘C’ played a crucial role in giving him that opportunity.

“If we have to choose between two players who are at a similar standard, we would tend to go for the younger player to try and help them in their careers as much as we can.

“Our manager Mark Jones is very good at lifting the players and getting them up for the game.

“England are a good team with a lot of players in the Vanarama League, but there wasn’t a lot between the two teams in last year’s game. They were a bit better in attack, a bit quicker and more threatening.

“But we’re not far away and it’s important not to give them too much respect. We have one game to win, so this is like a cup match for us. I really enjoyed the experience last season and I’m looking forward to it again this time.”

Available to watch on-demand at S4C Clic, iPlayer and other platforms
A Rondo Media production for S4C