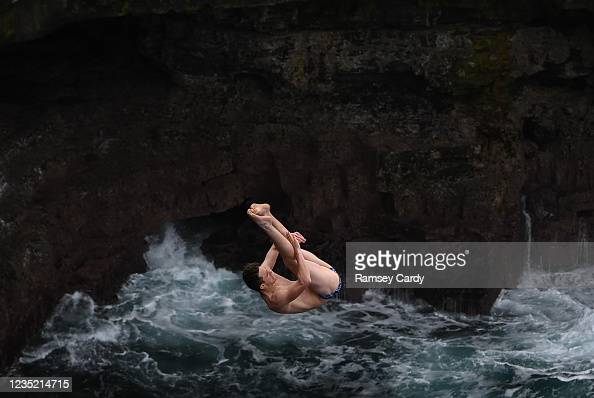 Aidan Heslop has revealed he thought he had blown his chance of winning before taking gold at the FINA High Diving qualifier in Abu Dhabi.

The 19-year-old Team Wales star pulled off a hugely difficult dive to win the competition and secure his spot in the 27m high diving event at next May’s World Championships in Fukuoka, Japan.

Aidan Heslop doves a new hardest dive with a difficulty of 6.2😱😱@HeslopAidan#highdiving pic.twitter.com/415HsRTQp7

Heslop – who became the first diver for 20 years to represent Wales at diving at the Commonwealth Games as 15-year-old in 2018 – has now booked his place for the biggest diving event outside of the Olympic Games.

But he feared he was going to miss out and admitted: “I thought that I messed up a little bit on the last dive and that it would drop me down, but magically I am in first.

“I can’t believe it. I am on top of the world right now.”

Heslop took the lead after the first round on day two, moving him into the day’s last diving position.

Aidan Heslop Makes Games Splash For All The Right Reasons

The Plymouth-based diver’s final dive had a 6.2 degree of difficulty, yet the youngster remained composed and received sevens from the judges – just enough to claim the gold medal with 436.90 points.

Heslop showed no nerves on the 27m platform ahead of his final dive, pulling off a breathtaking Forward 4 Somersaults 3 1/2 Twists Pike (5187B).

It was enough for the gold medal, 3.35 ahead of Catalin-Petru Preda of Romania.

Heslop, who has been cliff-diving since he was 12, is hoping to secure a permanent spot on the Red Bull Cliff Diving World Series after appearing at previous events as a wildcard.