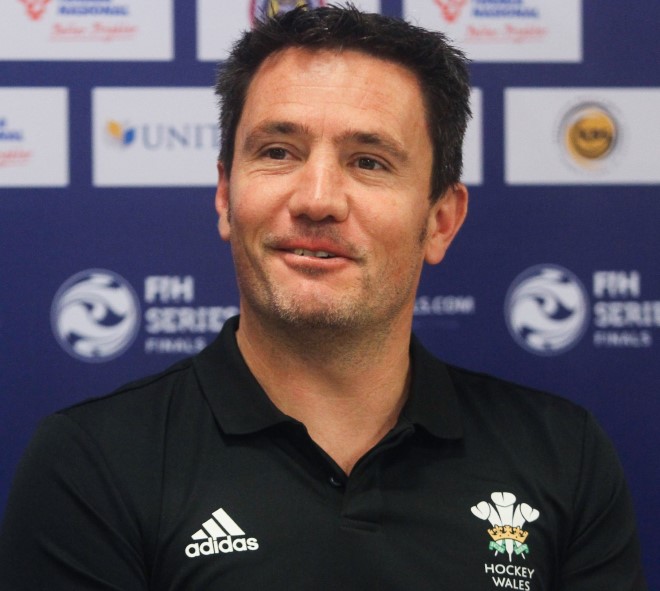 Jones has taken Wales's men to 18th in world rankings.

Jones has been appointed Men’s Assistant Coach having worked with the team and the Elite Development Squad in recent internationals.

During his time with Wales, Jones has taken the men’s squad from 36th to 18th in the FIH world rankings and lead them in retaining their top tier EuroHockey Championship status for the first time in two decades.

“I am obviously honoured and humbled to have been appointed to the GB role and excited by both the challenge and opportunity it presents,” said Jones.

“As a passionate Welshman, the decision to step down was not an easy one, nor one that was taken lightly. I have thoroughly enjoyed my time and would like to take this opportunity to thank all the players and staff that have contributed to the cause throughout my time with the organisation.

“Closest to my heart are the current group of staff and players, who are just an incredibly special group of people. I am so proud of them and what they have achieved, but perhaps more importantly, I am prouder of the way they have carried themselves and represented Wales both on and off the pitch.

“We have shared some unbelievable times, made memories that will last a lifetime and thoroughly enjoyed doing it! It has always been a team effort and I will be forever grateful for all the sacrifice, commitment and time they put in.

“Rest assured, I will be supporting from a distance and look forward to seeing where the next stage of their journey takes them as there is still so much more to come from this group.”

He added: “Being involved with Great Britain as a coach or a player is the pinnacle and I am incredibly excited by both the challenge and opportunity that the role presents. It is a privilege to be working with an extremely talented squad of athletes as well as an outstanding and experienced staff group.

“I am really looking forward to assisting the development of the athletes as people, both on and off the field, whilst at the same time striving to enable them to consistently perform and succeed at the highest level.”

Men’s Head Coach Danny Kerry said: “We are delighted that Zak is joining us. Throughout the rounds of the recruitment process he demonstrated the qualities and skills that will complement our team.

“He brings experience, skills, humility, and a hard-won granular understanding of the current international men’s game through his excellent work with Wales and from within his previous work with GB. We look forward to welcoming him into our team.”

Hannah Bevan, Head of Development for Hockey Wales, said:  “We have been honoured to have Zak in the Wales coaching set up for a number of years and have seen the huge difference he has made, notwithstanding the current World Ranking the men hold.

“Whilst this is a loss for Wales, it is a huge gain for GB and just goes to show the calibre of Zak’s coaching.

“Everyone at Hockey Wales and the wider hockey family are incredibly proud and would like to congratulate him on this appointment with GB.”

Jones is set to be part of GB’s coaching set-up first matches back in the FIH Hockey Pro League in October and November following the postponements due to COVID-19.

GB’s women and men’s teams both start with away matches against The Netherlands and Belgium before hosting Germany (almost certainly behind closed doors).