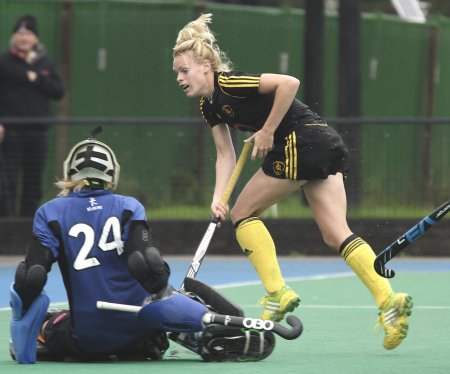 Sophie Robinson is returning to the Wales squad for the three-match test series in France later this month.

The Nottingham-based player is part of coach Kevin Johnson’s 22-strong squad for the trip to Antibes which also includes two new caps.

Robinson, who plays for Beeston, has not been part of the squad since 2011 because of the financial demanding playing hockey, but is relishing her return.

Cwmbran’s Sara Davies and Norwich’s Lizzie Jones, who qualifies for Wales thanks to a grandfather from Tylorstown, are set for their debuts.

The test series from Tuesday 26th February to Friday 1st March will be Wales women’s first matches of the year.

And it will offer vital preparation time ahead of the FIH Hockey Series Finals due to be held in Valencia in June when Wales face many higher-ranked teams.

The last time Wales face France was in Douai at the World League Round in 2016 when a 4-1 win secured second place in the tournament and promotion to Round 2.

Johnson said: “I’m really looking forward to us playing some test matches again after coming together for some very positive national training camps in December, January and February.

“I am expecting France to offer a real challenge to us and therefore it will be an opportunity to test some of the strategies that we have been working on.

“It is always a proud moment to reward players with their first caps for the National team so I’m delighted to see Lizzie Jones and Sara Davies selected for this series and their first capped experience.

“Lizzie has made an impact after recently joining our programme and Sara has come up through our junior ranks and performed well at the recent European U21 indoor championships.

“I am very pleased also to see Sophie Robinson back in a Wales shirt after a long absence. Sophie brings an extra threat to our front-line attack and has demonstrated over the years a natural ability to both generate goal shots and score goals.”