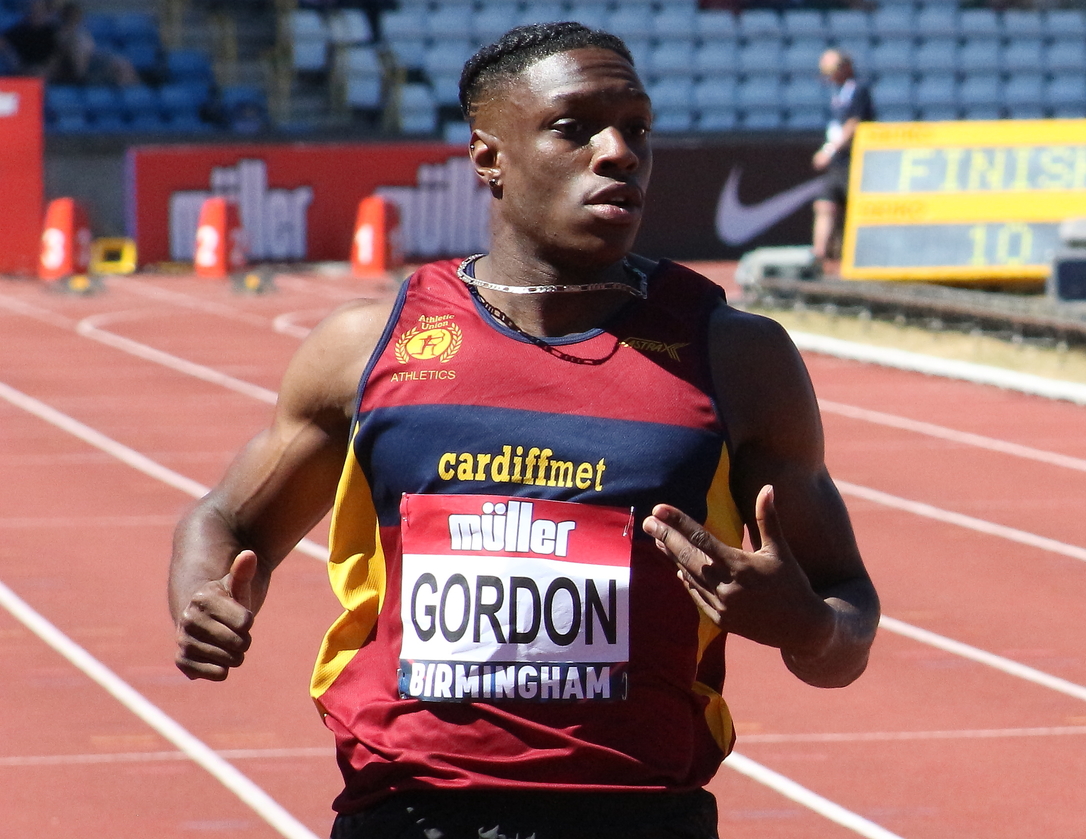 Wales saved the best until last with a spectacular win in the men’s 4x100m relay at the Manchester Athletics International on Wednesday night.

Welsh wins had been hard to come by during a high class and hugely competitive international match between teams from England, Scotland, Northern Ireland, GB Under 20s and a combined British League squad at the Manchester Regional Arena.

But in the final event of the night the Welsh quartet blew away the opposition, racing home by some 15 metres.

Jeremiah Azu got Wales off to a flying start out of the blocks, but they really pulled away thanks to brilliant legs and slick changeovers to Josh Brown and Kristian Jones.

When Sam Gordon took the baton, he was already way out in front and extended the Welsh lead as the team clocked an excellent time of 40.10 in wet and breezy conditions.

The Welsh sprinters had already made their mark in the 100m guest races earlier in the evening where Gordon continued his blistering form with another lifetime fastest time – albeit once again wind assisted.

The Cardiff AAC man followed up his 10.26 in the British League at Hendon, with an even faster 10.14 to win the first heat of the guest races with a plus 3.6 following wind down the home straight.

His Cardiff club mate Jones also benefited from a tailwind as he clocked a fastest time of 10.40 to win the second heat where another Cardiff man Azu was fourth in 10.60.

The women’s guest 100m races saw Carmarthen Harrier Alicia Samuel produce an excellent performance to finish third in her heat in a fastest ever time of 11.88, once again assisted by a plus 3.0 wind.

In the international match, wins were few and far between for the Welsh contingent, but there were plenty of excellent top three placings.

A strong finish from Cardiff AAC’s Elliot Slade saw him claim another second place to Scotland’s Jamie Williams in the 800m, clocking a time of 1:52.8.

There were also some stand-out performances in the field for Wales, where Cardiff AAC’s Brett Morse pulled out a season’s best throw of 61.94 – his best since 2016 – in the men’s discus, where he was only pipped to the win by a championship best of 62.91 from Iceland’s Guoni Gudnason.

Morse also finished second in the men’s and women’s combined event with team-mate Adele Nicholl, of Birchfield Harriers, who threw 45.22m for a combined total of 107.16. There was a third place in the combined table for Pembrokeshire Harrier James Tomlinson, who was representing Great Britain Under-20s.

Wales also finished second in the combined men and women’s hammer where Cardiff AAC’s Jac Palmer threw 65.83 and Deeside AAC’s Amber Simpson chalked up 56.49 to register a combined distance of 122.32.

There was an outright individual win for Welsh athlete Tom Hewson, who was making his debut for the Great Britain Under-20 team in the javelin.
Hewson threw 66.20 to win the men’s section and finish second with Bekhah Walton in the combined competition, where Wales’ Jason Copsey and Bethan Rees finished third.

Adele Nicoll and Patrick Swan finished third in the men and women’s shot put. Nicholl threw the second longest distance in the women’s section with 14.79m while Swan registered 14.65 for a combined distance of 29.44.

In the penultimate event of the evening, the Welsh women’s 4x100m team looked in with every chance of a win as they approached the final change over in the lead. But they failed to complete the final changeover and were disqualified.

However, the men’s quartet made no mistake as they rounded off the evening in style with Wales eventually finishing fifth in the international match won by England ahead of the British Athletics League/UK Women’s Athletics League combined team.