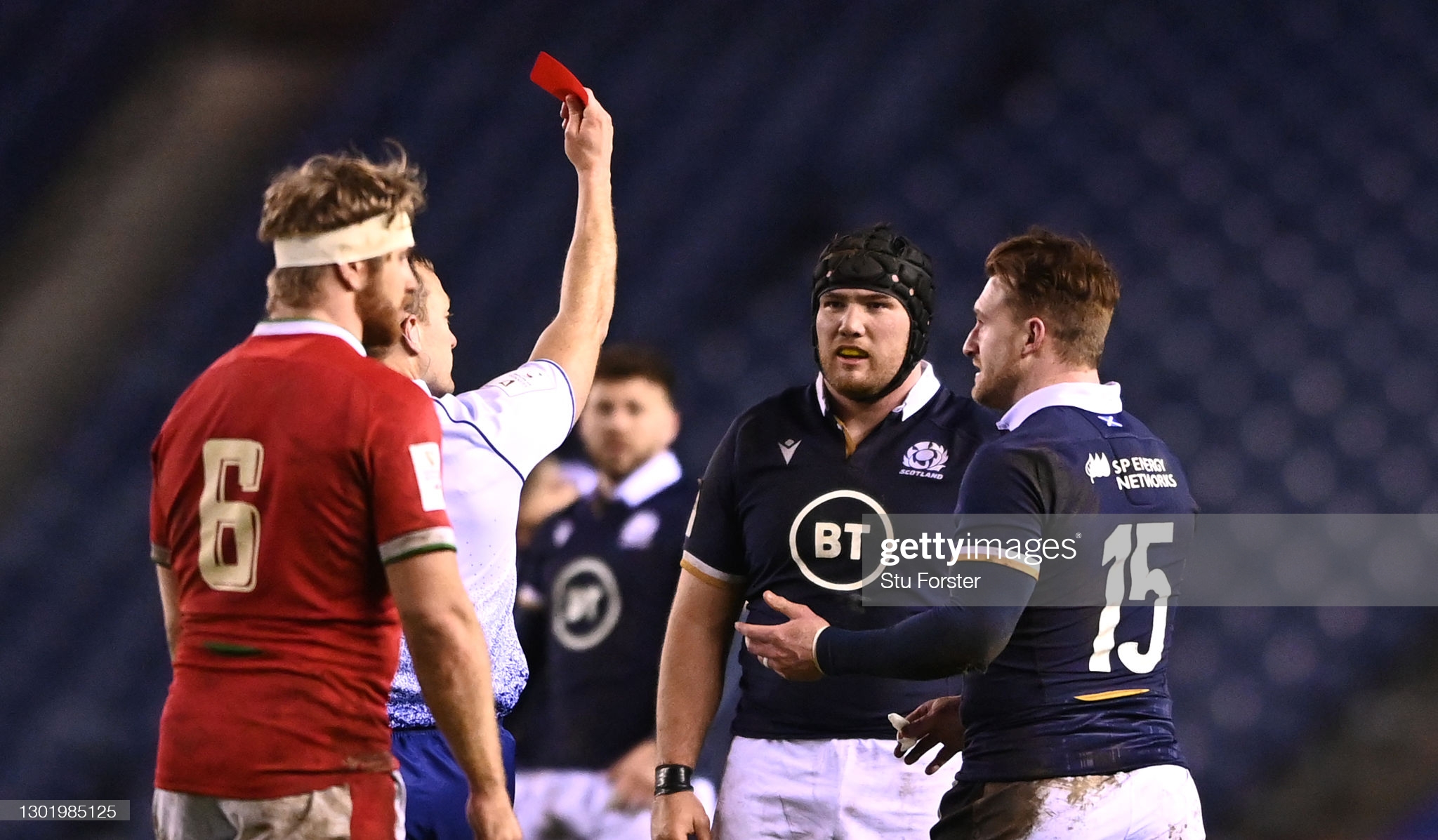 Next week, Wales will be bidding for a Triple Crown when they take on England – surely, the most unexpected success story of the season. They’ve blindsided their critics, but the red cards have also led to a certain blind spot when it comes to possible concussion, says Harri Morgan.

After the opening two rounds of the Six Nations, Wales are fighting the good fight for all the students who were never given the opportunity to disprove their predicted grades.

Ok, so their luck is in.

Which makes it all the more difficult to assess whether they have worked diligently to learn the lessons from a disappointing set of results in the autumn mocks, or whether they are late night crammers whose questions came up.

The Wales defence may not yet be at Edwardian levels, but when contrasted with the 2020 offering, the system has become more cohesive, with increased individual accuracy.

Initial evidence would suggest, new defence coach Gethin Jenkins has established an environment of individually accountability – a fundamental facet of a successful operation, built on bilateral respect and personal connection.

The performances of Callum Sheedy, Kieran Hardy and James Botham – off the bench at Murrayfield – have also provided retrospective vindication for the Nations Cup selections that seemed disjointed back in November.

Sheedy was stand-off-ish at times in his opening foray into the international game against Georgia and Italy. Ironically, that’s not a desirable quality for a stand-off.

Particularly, not one who has built his reputation on his ability to boss the attack by engaging the defence.

Having showed some neat touches in the final quarter against the Azzurri, he looked at his Bristol best on Saturday against Scotland – comfortable with the expectation of international rugby, and confident in his ability to excel by playing his natural game.

At this point in the competition, I’d anticipated we would be weighing up the merits of ‘Pivac in’ versus ‘Pivac Out’.

With the red card caveat inhibiting a true performance assessment, perhaps this week’s discussion should centre on the incidents and accidents that resulted in Wales finding themselves playing against 14 men for the bulk of the first 160 minutes of the Championship.

Yet, for me, it is not the act where there is most scope, and need for discussion, more so the ensuing omission.

Having been the recipients of contact to the head with sufficient force to warrant the ultimate on field sanction, both Tomas Francis and Wyn Jones have remained on the field of play.

The latter even bagged himself a meat-pie only a minute after the meeting between his head and Zander Fagerson’s shoulder.

Perhaps I am missing something, but I’m struggling to comprehend the fact that neither player was removed from the field of play for an HIA isn’t receiving significant scrutiny.

I assume the players were assessed on field and deemed fit to continue.

Litigation is no longer an inevitable threat, it is an imminent one. When the day(s) in court arrives, expect the legal concepts of negligence and duty of care to be prominent.

Rugby is acknowledging and punishing acts of foul play with a view to promoting the behavioural changes vital to the sustainability of the game.

How can it simultaneously not see the scope to harm both the individual and the game by allowing the victim of a recognised act of foul play to simply ‘go again.’

Is duty of care being properly exercised?

World Rugby’s, Head Injury Assessment Protocol, ‘Putting Players First’, provides for two criteria, which, if met, should result in the player being removed from the field either permanently or for a cognitive assessment designed to determine fitness to return to action.

The first is where a player displays ‘obvious on-pitch signs of concussion’. This includes: confirmed or suspected loss of consciousness, balance disturbance and definite confusion or behavioural changes.

The second criteria requires for a player to be removed from the field to undergo an HIA where there is potential for concussion, but no on-field symptoms or signs.

The appendix defines a ‘head impact event where diagnosis is not immediately apparent’.

Enforcing an HIA in the scenario where all appears fine, might be perceived as salt into the wound for the team on the wrong end of the foul play. Not that there is a right end, but the bigger picture crushes the impact on the scoreboard.

These are not isolated incidents.

Owen Farrell didn’t leave the field in the Rugby World Cup pool stage after taking a shoulder to the chin against Argentina.

Tomas Lavanini got his marching orders, and Farrell had an “unexplained’ off day with the boot.

When the Scarlets’ Liam Williams fired himself, head first, into a ruck with his skull colliding recklessly with that of Shane Lewis-Hughes, Williams correctly saw red.

The Blues’ blindside got a wad of Vaseline applied to the lid and went about his business.

I understand why the spotlight and narrative focuses on the act – this is the root cause – but it is high time we stop ignoring the omission.

To do so would surely be negligent.