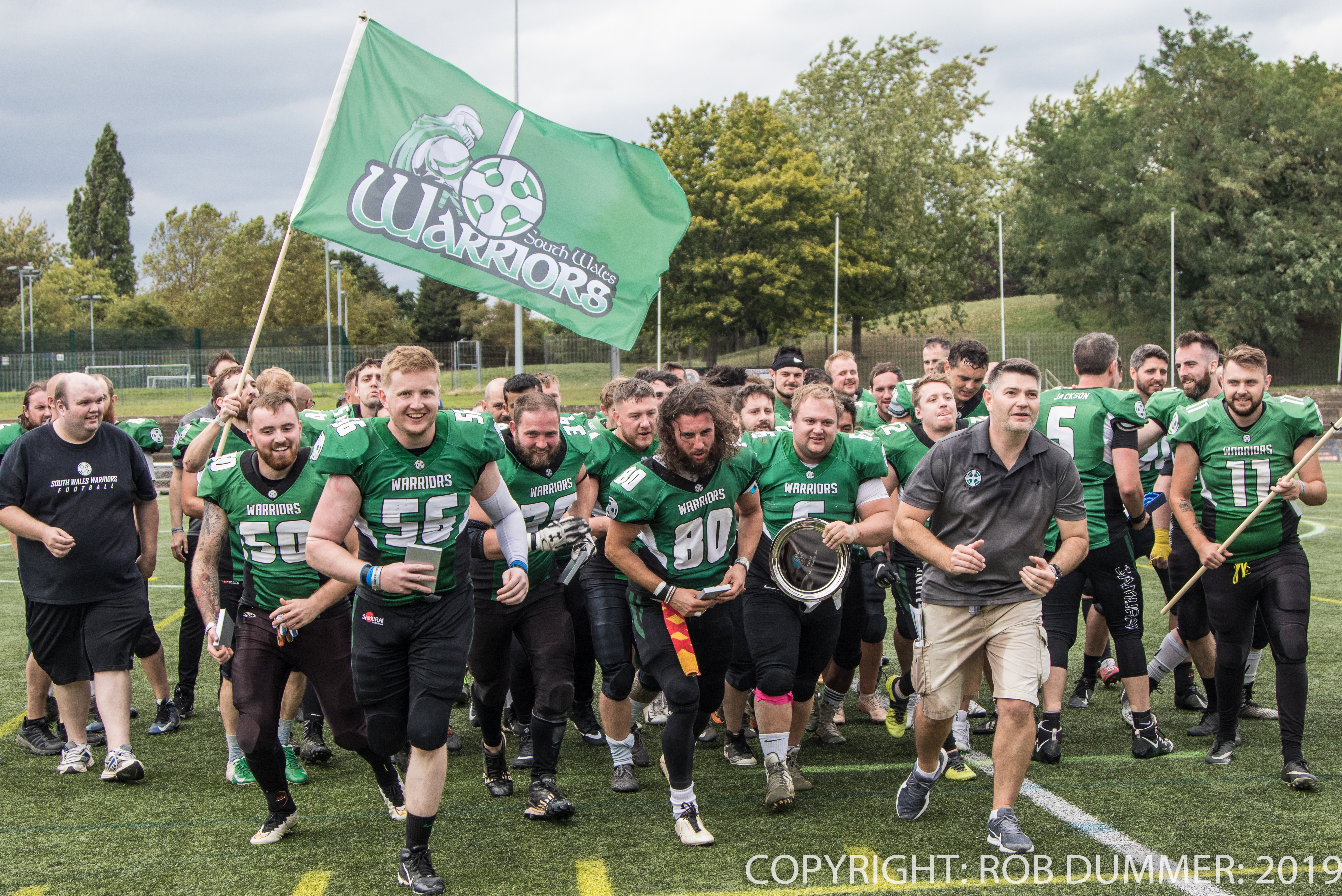 As the USA gets ready to plug itself in to the Super Bowl on Sunday, when the Kansas City Chiefs face the San Francisco 49ers, there will be at least two clubs in Wales with more than a passing interest as Twm Owen reports.

America’s biggest sporting event is said to be capable of bringing the world’s superpower to a halt, but in Wales the Super Bowl has inspired armchair fans into action for more than 30 years.

American Football in the UK was kick-started by television coverage, including the Super Bowl shown live, on S4C and Channel 4 in the 1980s, and today Wales is home to both male and female clubs with the game also played at universities and by several non-contact flag teams.

Though none of the clubs formed in Cardiff, Swansea, Newport and north Wales in the 1980s have survived to the present day, the South Wales Warriors, who have competed in the British American Football Association (BAFA) National Leagues since 2001, are Wales’ longest established club and still attracting new players.

When the new season kicks off in April, the Warriors, who play their home games at Llanharan Rugby Club, around halfway between Cardiff and Bridgend, will be competing with clubs from across the south of England in the British game’s second tier having won the Division Two South title last summer.

The Warriors opened their training programme in January with sessions designed for new players in a sport which those who play insist requires all shapes and sizes.

Christopher Bartlett-Legge has played since he was 15 and the defensive back is entering his 12th season with the Warriors after joining as an 18-year-old.

Despite the game’s reputation for big hits, reinforced by the gladiator-type protective equipment players are clad in, he was initially drawn to the game after suffering a rugby injury.

“I played rugby when I was younger and hurt my knee so looked for a sport with less contact at the time and found flag football and that’s where my obsession for the sport started,” said the now 29-year-old from Risca, near Newport.

Despite initially having “no idea” of the rules, the stock controller has built up such experience he also coaches the Gwent Gators flag team and fits in two American Football training sessions a week with at least three visits to the gym and time spent watching training videos.

Christopher, who also plays centre for his local rugby side, Cwmcarn United, credits American Football’s ability to find a technical position for all body shapes as setting it apart from sports more traditionally found on Welsh playing fields.

“I think the biggest attraction it has against more mainstream sports is that it is a game for all sizes of people. It needs people with such a variety of body sizes to be successful.

Lois McConville – like Christopher – is a defensive back who had little knowledge of the game when she joined the Cardiff Valkyries in February 2016, when the club was formed as Wales’ first, and still, only women’s American Football team.

She was inspired by her partner, who played for the Cobras, Cardiff University’s American Football team who have been competing in the British university league since 1986, having fulfilled various volunteer roles.

She says: “I played netball through school, college and uni and I also do tap dancing.

Want to try a new sport this year? Come along and try American football! 🏈 You never know where the sport will take you 👏#NewYearNewYou #Sport #SportInWales #Britball #Americanfootball #Cymru #Wales pic.twitter.com/rlILeS8us9

“When there was a taster session for women I thought I would try it out as I had been involved with the uni’ team for physio/sports massage or ball boy at games.

“I didn’t really know much about the sport, and I still don’t know everything, but thought I would try something new.”

The Valkyries started by playing flag football and during the past four years have competed in flag and contact tournaments, with reduced player numbers, rather than the standard 11, on shortened fields across the country.

Lois, who is 25 and lives in St Mellons, Cardiff, credits coach, Simon Browning, a veteran of both the Warriors and the Cobras, with making an initial group of five rookie women a competitive force.

“We started with flag football and we have just grown and developed into our contact team and some of our girls entered the Diamond Series where they have the chance to be spotted for the Great Britain’s women’s team.

“I think we are really lucky we have Simon as our head coach. He knows so much about the sport and how the leagues across the UK are run.”

“We want every woman in Wales to consider playing for us,” adds Lois.

“There is a position suited for every type of person in American football; strong, slow, fast, small, aggressive, nimble, accurate. I had never played a contact sport in my life prior to joining this team.

“We have players from all sorts of backgrounds: no sport, netball, rock climbing, martial arts and rugby. We just want women to come along, be enthusiastic and enjoy themselves.

“I will go out advertising the team at local gyms in my kit with the other girls. I try to tell the women we meet that it’s great to try something new and that the contact element isn’t scary.”