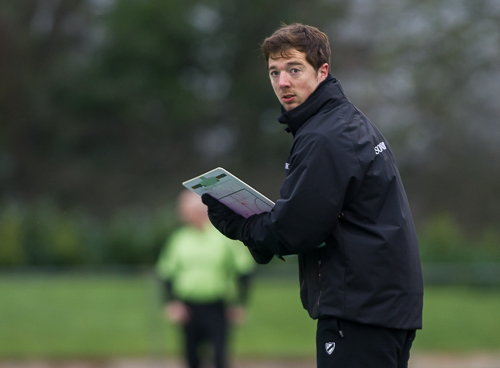 Danny Newcombe has been handed the job of leading Welsh hockey into next year’s European Championships after being named as the new head coach following Zak Jones’ move into the team GB set-up.

Hockey Wales have adopted the tried and trusted football ‘boot room’ policy of promoting from within in the wake of Jones’ departure.

Newcombe has worked alongside Jones as his assistant for the past two years and has been working within the Welsh hockey coaching network for almost a decade.

One of the busiest men in hockey coaching in the UK, Newcombe is a Senior Lecturer, Coach Developer and Skill Acquisition Expert at Oxford Brookes University.

He is also a former head coach at Southgate HC and the current director of hockey and men’s performance and head coach at Reading HC.

He worked his way up the Welsh coaching ranks from U21 assistant coach to Jones’ assistant at the 2018 Commonwealth Games.

He was the Welsh Hockey Union Coach of the Year in 2010-11 and also coached Oxford Hawks. As a player, he used to be a defender with Henley HC.

“I’m incredibly honoured to be given the opportunity to lead the senior men’s programme.  This is a special group of people, one that is a privilege to be part of,” said Newcombe.

“I have some big shoes to fill, however, I’m excited to continue the great progress we have made under Zak’s leadership. I could not have asked for a better head coach to work for and learn from.”

During his time  working alongside Jones, the pair enjoyed incredible success, seeing the Welsh men’s team rise to their highest ever FIH World Hockey ranking following promotion to the EuroHockey Championships for the 2019 competition.

Newcombe will take up his new position in September for an interim period of 12 months to ensure continuity for the squad in the lead up to their crucial European competition in June, 2021.

“It’s really important in this crucial year for the squad that there is trust and continuity in the appointed individual,” said Hannah Bevan, Head of Development for Hockey Wales.

“Having worked with Zak and the players for nearly a decade, we can be assured that Danny can provide this ten-fold.”

To ensure a seamless handover for the squad and support staff, Newcombe and Jones will continue to work together until both their appointments begin in the coming months.

“I’m absolutely delighted for Danny.  He is thoroughly deserving of the role as he has been an integral part of the senior men’s journey over the past few years,” said Jones.

“Having worked so closely with him during that time, I know that he has all the required attributes and that there is no-one better placed to lead the squad into the next phase of their journey.

“He has a great rapport with the players. No one understands the group and their values and cultures better than Danny.

“I’m certain that he will have the full support of both the playing group and staff and that he will also provide the squad with stability and continuity as he leads them into their European campaign in 2021.”