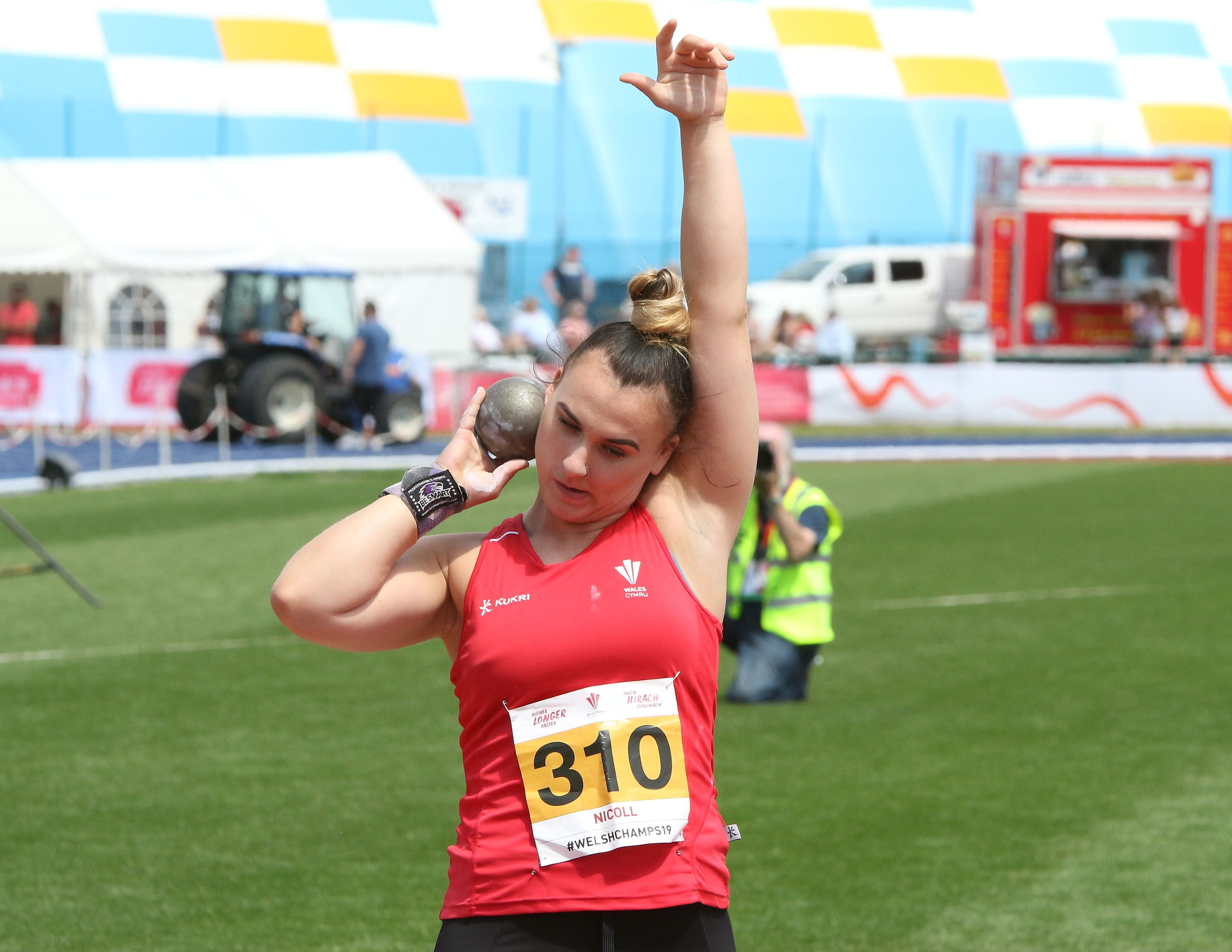 The lashing Lancashire rain held no fears for many of the Welsh athletes competing at the Manchester International on Wednesday night.

The Welsh throwers appeared to be particularly at home in the wet, bringing home a clutch of medals in difficult conditions which saw the action suspended for a short time after one particularly heavy downpour.

In-form Liverpool Harrier Osian Jones, who has been habitually breaking his Welsh record recently, took another win in the hammer for the combined men’s and women’s British League team with another long throw of 73.09.

Adele Nicoll’s excellent season continued with a win in the shot put. The Birchfield Harrier and Cardiff Met student gained maximum points for Wales with a winning effort of 15.65m.

The men’s shot saw Patrick Swan also earn valuable points for Wales when he secured third place with a put of 15.70m.

Elsewhere in the field, Sarah Abrams produced a brilliant season’s best performance of 6.25m to edge out European Championship and Commonwealth Games silver medallist Jazmin Sawyers, of the All Star team, on countback.

On the track, it was a mixed night for Cardiff’s Sam Gordon, who  set a new personal best in the guest 100m race before pulling up within the first few strides of the match race.

In the second of the 100m guest races, Gordon lowered his PB by 0.01 of a second to 10.31 as he won comfortably running into a headwind.

An hour and forty minutes later he lined up for the match race with everyone anticipating a fast time, but pulled up immediately after the first few strides.

Hopefully it wasn’t a serious problem and he will be able to take his place at the British Athletics Championships and World Trials in Birmingham on August 24-25.

Commonwealth Games athlete Eli Kirk got the Welsh challenge off to a flying start early in the evening with an impressive win in the 3000m.

The Swansea Harrier and England’s Louise Small were well ahead of the field going into last lap. With 300m to go Kirk took the lead and pulled clear to win in 9:28.30.

Neath Harrier Owain Lloyd Hughes smashed his 100m PB in the guest races as he finished second in 10.49, slashing a third of a second off his best time.

Meanwhile, Kirsty Taylor followed up her double silver medal at the World Junior Para Championships with a third place in the ambulant 100m in 14.44. In the men’s race, Rhys Jones was third in 11.79 and James Ledger fourth in 11.85.

In the men’s para 1500m, Cardiff’s Steve Morris went out early with American para superstar Mikey Brannigan, who had been training in the capital with Morris during the week leading up to the event.

Morris led through the halfway mark before Paralympic and World Champion Brannigan took over at the front and put the pedal down to surge away from the field.

Morris eventually finished fourth, well ahead of the main pack in a time of 4:02.64, just outside his season’s best.

Newport’s Remi Adebiyi celebrated his latest Great Britain vest by finishing an excellent second in the 3000m steeplechase in a time of 9:11.54.

There was plenty of excitement in the relays where there were a number of disqualifications.

The Welsh men’s 4×100 team however produced an excellent performance as they finished fractionally behind the England quartet in the match race.

There was drama and confusion in the women’s 4×100 relay where all but two teams were either disqualified or failed to finish.

Wales, featuring Issie Tustin, Amy Odunaiya, Hannah Williams and Melissa Roberts were initially awarded first place in 46.43, but subsequent meeting results show them as not having finished the race.

At least they managed to take to the track – compatriot Seren Bundy Davies was unable to compete in the 800m and 4x400m after her car was broken into and her spikes and trainers stolen.

England won the overall international match. Full results can be found on the English Athletics website.