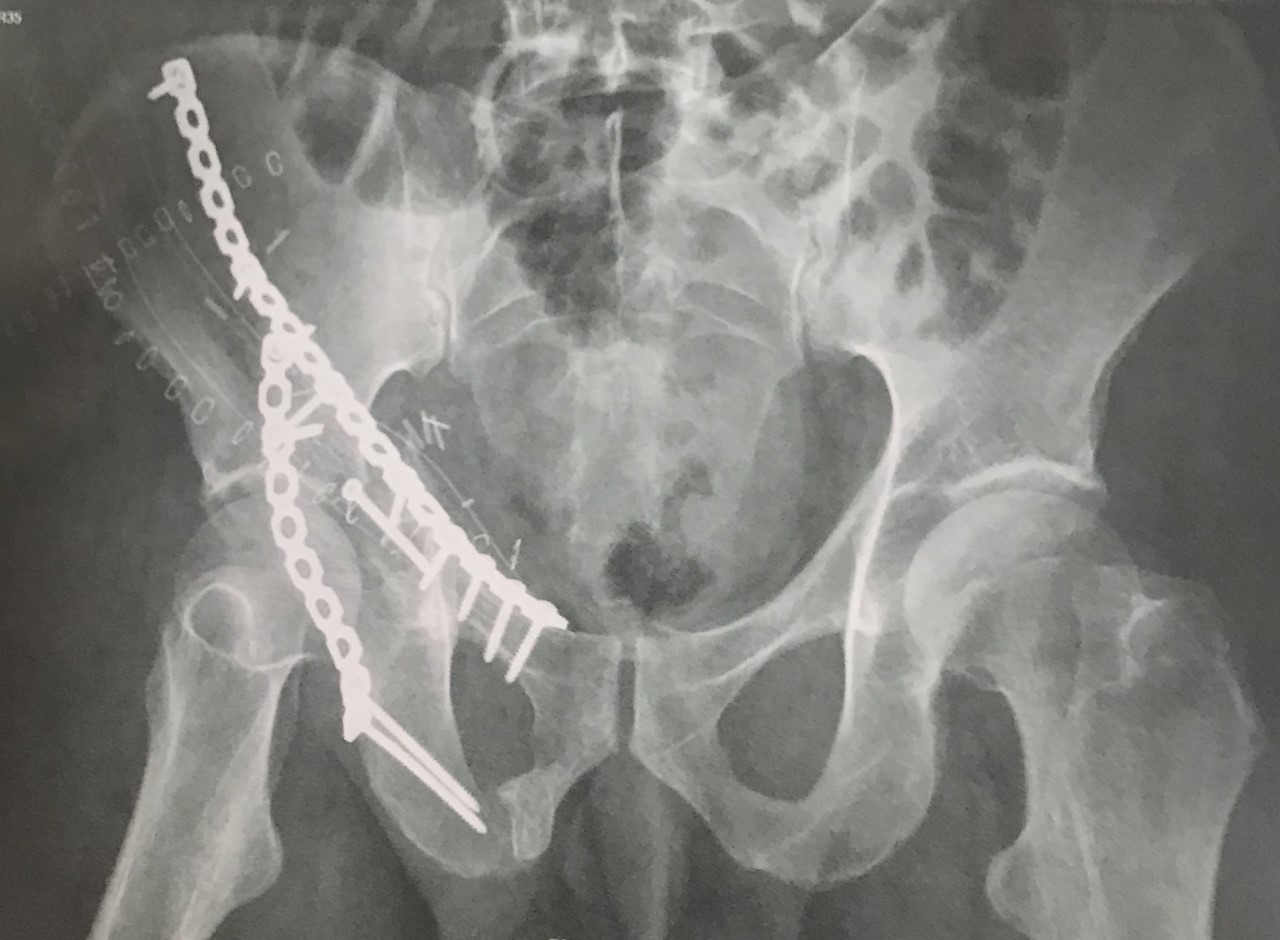 An x-ray showing the titanium plates and bolts in Craig' Parry's pelvis after two gruelling operations in Germany.

Less than four year ago, Craig Parry was co-driver for Elfyn Evans as they lifted the British Rally Championship. Two years later, that world came to a shuddering halt – but a whole new one has opened up as Paul Evans discovered.

It had started as just another ordinary day for Craig Parry.

He was in Germany, at the vast Baumholder military training range near the Luxembourg/France border to be precise, testing in preparation for the following week’s Rallye Deutschland.

Contesting the FIA World Rally Championship (WRC) is what Craig did for a living, and for the well-established, successful and experienced co-driver, rallying was his life and his livelihood.

And with a sporting retirement age of around 45 in the back of his mind, it was going to be his full-time career for at least the next six years.

Having won the British Rally Championship title with Elfyn Evans in 2016, he’d now teamed up with a young up-and-coming British driver called Gus Greensmith, and together they were plotting a path to future glories on the world stage.

But that day, the 10th August 2018, was going to be the last time that Craig would sit in a competitively driven rally car.

He didn’t realise it at the time, but he’d already contested his final rally. He didn’t know that within a few minutes of starting another high-speed test run, his life would be changed forever.

The Baumholder range is lined with hinkelsteins – large concrete blocks on the edge of the asphalt road, designed to prevent tanks meandering off course.

Everyone in rallying knows about them, thanks to Petter Solberg and his Welsh co-driver Phil Mills destroying their works Subaru Impreza after they crashed in to one during the 2004 Rallye Deutschland.

Unfortunately, the Ford Fiesta R5 Craig was sitting in that Friday afternoon also hit a hinkelstein, coming to a dead stop from 75mph.

The co-driver’s side of the car took the worst of the enormous impact.

Craig’s pelvis was shattered so badly that it took over 13 hours of operations to pin his pelvis back together using metal plates, bolts and screws.

He spent three weeks in hospital in Trier and another 12 weeks recuperating at home. But the worst news was yet to come.

“Everything was healing pretty well,” said Craig. “I went to see a pelvis specialist in Stoke, and that was the first time someone laid everything out in black and white.

“He said that if I returned to co-driving and had another accident, the best that would happen is that I’d lose the use of my right leg because of all the nerve damage, and the worst was that I could die.

“That was scarier than the accident. I cried all the way home. After almost 25 years co-driving, my career was over – and I had no back up plan.

“The main focus was getting physically fit again – 18 months later I’m still not 100 per cent, because of the severe nerve damage and the weakness caused by cutting through the muscle during the operations – but mentally it was even more difficult to recover.

“There were some fairly dark days. I had a wife and two small children, but no job, no income and seemingly no future.”

But there is another significant date in this story – 11th November, 2018. A rally friend from Ireland, Killian Duffy, gave Craig a phone call to see how he was getting on.

Duffy had an established business called OnThePaceNotes who made safety route notes for the majority of events in Ireland – either for events where recces aren’t allowed, or to assist novice co-drivers who are learning the art of stage rally navigating.

With Craig’s expertise and his meticulous approach to pre-event planning, he was the perfect fit to run and grow the business in the UK. The two soon agreed to become partners – Killian focusing on his current client base in Ireland, and Craig starting afresh in the UK.

David Evison, the secretary of the Pirelli Welsh Forest Rally Championship, was the first to support the venture, enlisting Craig to prepare route notes for as many rounds of the series as possible.

The decision to use the services of OnThePaceNotes is down to each individual event organiser, and at the start of 2019 Craig had seven rallies booked up.

Having successfully approached other events around the country, by the end of 2019 he had supplied 18 rallies with route notes.

At the start of 2020, pre-coronavirus and the temporary suspension of all motorsport activities, 29 rallies had booked his services.

There are several reasons for this rapid growth in business. Craig is without doubt one of Britain’s most experienced co-drivers and is passionate about helping others progress in the sport.

But the fact that he is still very active in the WRC is also a key factor. He might not be competing any more, but he does what’s called ‘gravel notes’ for the Toyota Gazoo Racing World Rally Team – in particular, their Japanese driving protégé Takamoto Katsuta (who is partnered by another former Elfyn Evans co-driver, Daniel Barritt).

Travelling every section of the route before the main event arrives, Craig and Juho Hänninen (a multiple rally champion driver from Finland) help ‘Taka-san’ on the three asphalt rounds of the WRC by checking, and where necessary amending, his route notes.

Craig’s first event with Toyota was the Monte Carlo Rally in January, and he’ll go to Rallye Deutschland in October and Rally Japan in November.

Making route notes is a huge responsibility, as a rally driver will drive to whatever a co-driver calls, based on what these route notes say.

If a co-driver calls a blind corner ‘flat’ for example, then a driver would take that corner flat out!

It’s an intoxicating combination of skill and trust, which relies on the co-driver’s notes and the driver’s interpretation and reaction to be both correct. There are trees and ditches to catch anyone who gets it wrong.

For Craig, creating these detailed descriptions of the road – and to produce all the documents, an in-car recce video, and to send them all nicely bound to customers on time – has become a fulfilling and full time occupation.

To do it, he and Killian first have to drive over each stage at least twice to write down (and then check) the angle of every corner, the distances between corners and vital information like what’s on the other side of a blind crest, plus any forest traps that must be avoided.

“Don’t cut” to avoid a rock or tree stump on the apex of a corner, for example.

And by writing down, it means writing the route in a co-driver’s hieroglyphic-style shorthand code, which can be read to a driver clearly and quickly as they race through a forest stage at anything up to 120mph.

As different crews use different systems, Craig produces route notes in seven different styles, to accommodate all the most popular techniques.

He then surveys the rally route again on the eve of the event and makes any last minute amendments.

“Creating these route safety notes for other competitors ticks many of my own co-driving career boxes that I really miss, like doing a recce and all the pre-event planning,” admits Craig.

“I don’t get to experience the end result any more of being in a rally car and using them to set a good stage time, but I’m surprised that I don’t actually miss that bit as much as I thought I would.

“Instead I get a real buzz out of customers doing well with our notes, winning rallies or winning their class.

“I get the same kick out of it, which is something I really didn’t expect to happen.

“The main criteria for good route notes, apart from them being an accurate description of the road, is consistency.

“The same goes for the distances between corners. None of the route notes we produce are based on speed and they are not overly complicated either, we just write the road as we see it.

“And I prepare all the route notes at home myself – all the photocopying, binding and posting, so it’s all done by the one person who has done the recce, seen the roads first hand and knows the condition of the road surface.

“Then, because the weather or logging machines can alter sections of the forest roads between the recce and the rally, we do a survey of the route again the day before an event and make amendments to the notes, so that the crews have the very latest route information.

“Many hours are spent producing a single set of route notes, and our customers clearly like what we do, as we’ve seen 96 per cent of our customers return and use OnThePaceNotes again and again.”

Craig has also started another business, offering a safety tracking service, similar to the one used in the World Rally Championship, to British national rallies.

Every competitor car carries a GSM responder and, from rally headquarters, event officials can monitor a rally car’s movement through a live stage – and more importantly see when and where it has stopped; which can be down a remote ravine, well out of sight of following cars or spectators.

It has revolutionised rally crew safety, as emergency vehicles can be deployed quickly to the scene of an accident.

Before COVID-19 put a temporary stop to motorsport, Craig had 26 events signed up to use this service in 2020.

Last year, OnThePaceNotes offered a prize of a test in a Philip Case Rally Sport-prepared Hyundai i20 R5 to the Junior Welsh Forest Rally Champion – something talented Pembrokeshire teenager Tom Llewellin won and will never forget.

This year the prize was to be doubled to include the Junior BTRDA Series champion.

Craig also gives money back to every event who use OnThePaceNotes for a marshals’ prize draw, in appreciation of the army of volunteers that help to run a forest rally.

And naturally there is a prize for the top-placed junior co-drivers in the Welsh and BTRDA championships, too.

What else do you do on a wet Tuesday night in Cheshire? Thanks to Warrington DMC for getting nearly 60 people in! @craigparry2 and I really enjoyed talking about co-driving, preparation and pace note skills. Fantastic evening and great to see such a strong turnout. Thanks. pic.twitter.com/jl9Pn0LXc8

This year it was to be an exclusive, money-can’t-buy, invitation to attend Hyundai Motorsport’s private pre-Wales Rally GB test, all thanks to Craig’s contacts in the WRC.

Add in organising rally crew training days and it’s no surprise that Craig is busier than ever, which is an incredible turnaround from that fateful day in August 2018.

“The last 18 months have been a rollercoaster,” says Craig. “Having to call time on my co-driving career and put away my crash helmet and race suit for the last time was one of hardest things I’ve ever had to do.

“I could not have imagined then that I would not just be still involved in the sport, but running two successful businesses and working on more rallies than I’ve ever done before.

“Although I’ll never be able to compete again myself, what I’m doing now gives me the same buzz as I used to get co-driving.

“I never thought anything like this could happen – and it was all down to fate.”