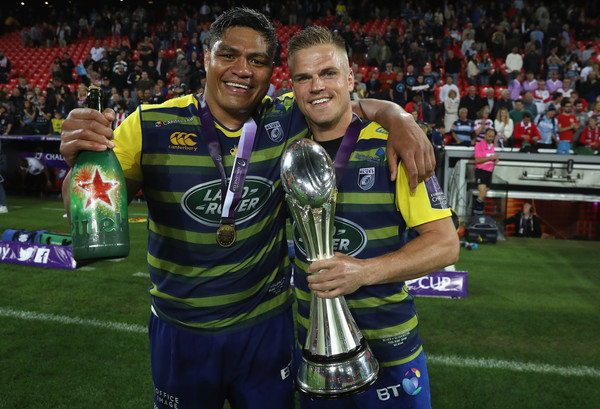 The celebrations from Cardiff Blues epic Challenge Cup comeback win over Gloucester in Bilbao may finally be subsiding. Now, as Geraint Powell argues in his latest column for Dai Sport, the issue is getting things right off the pitch to ensure future success.

Few would begrudge the Cardiff Blues region their 31-30 win over Gloucester in the final of the second tier European Challenge Cup final in Bilbao last Friday.

And especially departing head coach Danny Wilson, assistant coach (forwards) at Wasps next season, given his resignation in September 2017 and the risk that he would become a “lame duck” leader and the wheels would fall off completely on the playing side of the region.

Last summer was a difficult time at the Blues.

Talk of the Welsh Rugby Union “babysitting” the region during the proposed redevelopment of the Arms Park following another very poor set of annual financial results, the offloading to London Irish of new recruit and former Springbok lock Franco van der Merwe due to financial cuts, and increasing rumours that British + Irish

Lions wing Alex Cuthbert had decided to quit Welsh regional rugby at the end of his current contract in 2018.
Even the good news, that local professional player development guru Clive Jones was finally joining the region’s payroll to professionally manage the transition from the academy, was presented badly as being totally financially driven.

A player development strategy, taking advantage of the region’s longstanding Dewar Shield level school districts dominance in by far the most populous of the four southern professional regions, should have been the business strategy from creation in 2003 and especially upon acquiring the young player “goldfield” of the eastern half of the former Celtic Warriors franchise 12 months later.

Whilst never remotely approaching the level of the Dragons this season, the injury list at the Blues has hardly been negligible.

Wales and British + Irish Lions skipper Sam Warburton has been absent. The Blues have had to cope without key players such as Gethin Jenkins, Matthew Rees and Ellis Jenkins for long periods and similarly rising stars such as Dillon Lewis and Aled Summerhill.

But, at the exit gate, Danny Wilson has performed like a head coach transformed. All too often Blues head coaches have looked like they have the entire weight of the world on their shoulders.

Youth has finally been given its head and it has flourished.

The Rhondda’s Tomos Williams, Pontypridd’s Jarrod Evans and Garyn Smith and Cardiff’s Owen Lane in particular have significantly developed during the course of this season. Not yet finished articles and flaws remain in some of their games, but big strides forward.

Flanker Josh Navidi has this season been in the form of his career, breaking through at Test level.

Injuries impacted the match day squad, veteran Lions front rowers Jenkins and Matthew Rees unavailable and flanker Navidi and left wing Lane lost in the opening minutes of the final, resulting in Garyn Smith being brought on and pressed into emergency wing duty and Olly Robinson coming on for a man of the match performance.

The first half looked ominous, Gloucester taking a 20-6 lead. It might have been worse, referee Jerome Garces controversially disallowing a try from Gloucester flanker Lewis Ludlow.

There were a number of controversial decisions during the match, and which clearly incensed the Cherry + White faithful.

But refereeing decisions are just like the bounce of the ball, you win some and you lose some.

The Blues fought back in the second half and full-back Gareth Anscombe secured the win with a late penalty.

The question now is whether the Blues can build on their unexpected second tier success and their qualification for next season’s top tier tournament.

A successor head coach, Australian John Mulvihill, not being found in Japan and appointed until March probably aided Wilson this season. No successor on the scene at an early stage.

Whether Wilson lifting silverware is now such a good thing for Mulvihill, in terms of his imposing himself on the organisation, is a moot point? We all know what happened with former head coach Mark Hammett and the question of player power at the Arms Park in the past.

Will the Blues board back Mulvihill completely and leave him to run the rugby side of the business?
But the big questions, as so always with the Blues, are well away from the pitch.

With the current lease of the deteriorating and ageing Arms Park stadium expiring in 2022, will there be any progress after years of stalemate in securing a new 150 year lease to redevelop the site into a convention centre or something less ambitious?

In the meantime, what will be done to improve the weak balance sheet and the profit & loss account? The region is currently regularly running at an annual £1.5 million loss, and is therefore reliant upon an unsustainable level of charitable donations from major funding directors and especially from veteran Chairman Peter Thomas.

Or will the WRU simply be expected to pay much more from 2020 for the same services, when the region has no other potential buyer for the services they must sell to the WRU in order to survive, and obviously a problematic scenario for the WRU board in terms of their own company duties?

Especially given that such services have long been valued under successive regional franchise agreement renewals, subject only to periodical inflation adjustments.

What will the Blues do to attract fresh investment, from private investors or from financing via a WRU equity investment and long prevented in the Welsh regional game by debt mountains? There is only so much more the WRU can pay for the same, given the respective negotiating positions.

The archaic pre-regional governance has been unfit for purpose at the Blues since 2003, including preventing loan conversions to equity and not just wider identity problems. Will the articles of association finally be brought into the 21st century?

What will the Blues do to widen their identity and their appeal to their region, as their regular attendances are now comfortably less than the Scarlets despite having more than twice the catchment population and for the most part a population in closer proximity to their stadium?

Alienation acts as a drag on increasing crowds via success, because you are left with a significant rugby constituency that don’t care whether “their region” as currently constituted wins or loses.

The promotion of Cardiff City into the English Premier League will hardly ease the pressure on the region’s crowds, especially in terms of so-called eventers.

These are the difficult issues that will need to be confronted, if this season’s unexpected European Challenge Cup win is going to be converted into something sustainable and which reflects the strength of the emerging regional playing talent at the Blues.