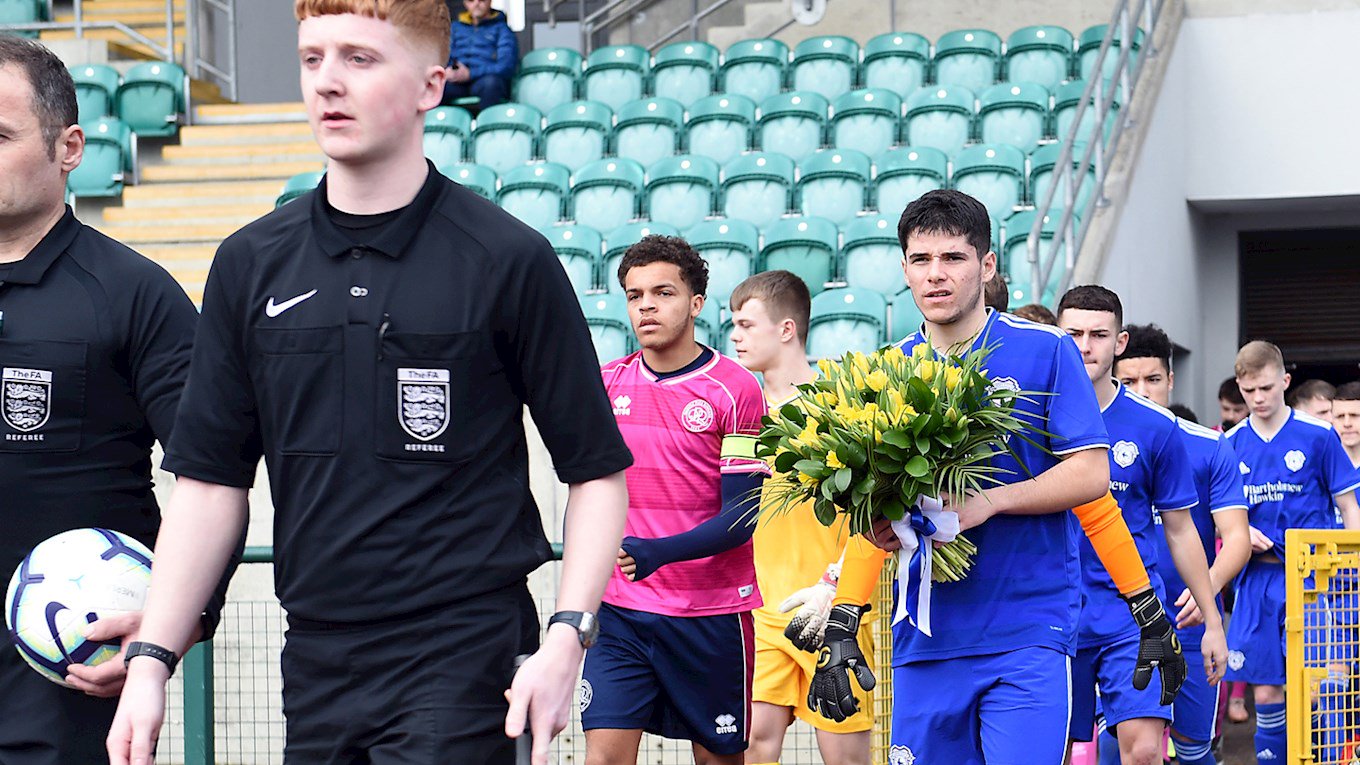 Cardiff City u-18 captain Jac Davies laid a wreath of daffodils and tulips as a mark of respect for Emiliano Sala and pilot David Ibbotson before their 2-1 win against QPR. Pic: Cardiff City FC.

Bluebirds past, present and future – a weekly Dai-Sport football column by Terry Phillips

Merthyr Tydfil-born Derek Showers, who often attends Bluebirds matches, will surely be at Cardiff City Stadium on Saturday when two of his former clubs clash.

Former Wales international Showers, now aged 65, started his playing days with Cardiff and later moved from South Wales to Bournemouth. The rivals meet in a Premier League match at CCS on Saturday (5.30pm).

Showers signed for Cardiff City straight from school in 1970.

John Charles was helping out with youth team coaching and Showers said: “John was there when I went for trials with Cardiff City.

“I was John Toshack’s boot boy when I was young.

“Each of the groundstaff boys would look after three or four players and make sure their boots were clean.

“Toshack’s kit was my responsibility. They were great days for a boy from Merthyr Tydfil who was a Cardiff City fan.

“I started going down to Ninian Park by train when I was aged 12.”

Showers was a prolific scorer at youth level and helped Cardiff City reach the FA Youth Cup final, where they were edged out against Arsenal.

That was during the 1970s when Cardiff defeated a Burnley team which included future Wales international Leighton James in the semi-finals.

The final against Arsenal was played over two legs and it wasn’t until well into the second game at Ninian Park that the Gunners went ahead thanks to a goal scored by Terry Burton, who went on to join the Bluebirds’ coaching staff much later in his career.

Arsenal won the final 2-0 on aggregate against a Cardiff youth team which included Phil Dwyer and Nigel Rees.

Showers had signed for the Bluebirds at 15 and made his first team debut at 17.

Following Toshack’s departure to Liverpool, Showers made his debut in a 1-0 defeat against Oxford United in December 1970.

Showers spent seven years with Cardiff City before moving on to AFC Bournemouth, later playing for Portsmouth and Hereford United.

He ended his League career at Edgar Street having scored 50 goals in 271 games for four clubs.

He later worked for Royal Mail and played for the Welsh post office team.

The favourite players for Showers when he was a schoolboy Cardiff fan were Brian Clark, Norman ‘Dixie’ Dean and Don Murray.

“Brian Clark was one of the biggest influences on my career,” he says.

“When I went to Cardiff City as a kid he was such a help to me. Brian was so professional – and a gentleman.”

The Bluebirds have given Oumar Niasse a Premier League lifeline – and he is intent on repaying his new club.

Senegal international Niasse has made two appearances for Cardiff City, playing a total of 137 minutes against Newcastle and Arsenal.

Niasse looked a quality striker, holding the ball up against Arsenal in particular, bringing team-mates into the game and linking well with Bobby Decordova-Reid in attack.

City’s 2-1 midweek defeat at the Emirates was Niasse’s third appearance since October and he has been short on match fitness. But he is building on those levels and will hope to complete 90 minutes against Bournemouth at Cardiff City Stadium on Saturday (5.30pm).

He is the fourth most expensive signing in Everton’s history – behind Romelu Lukaku, Marouane Fellaini and Yannick Bolasie.  Manager Roberto Martinez paid Lokomotiv £13.5m for Niasse.

When Ronald Koeman took charge at Goodison Park, though, Niasse found himself out of the first team squad and unwanted. He was stripped of his shirt number and ordered to train with the club’s under-23 squad.

“I was in the dressing-room with the under-23s but didn’t even have a locker.”

Koeman relented and sent Niasse on from the bench to score twice against Bournemouth at Goodison, goals that were a major boost to the Everton manager when he was under pressure.

The following month, though, Koeman moved on and David Unsworth took charge. It was Niasse’s man-of-the-match performance at Crystal Palace which helped them power to a remarkable comeback and earn a 2-2 draw.

Sam Allardyce rated Niasse his best striker available when he took charge, while Marco Silva, who is now manager, had worked with the striker at Hull.

Now the man from Ouakam, Dakar in Senegal has joined the Bluebirds on loan until the end of this season and is intent on leading a Cardiff City survival charge over the rest of this season.

He started his career with home town team US Ouakam, scored 21 goals when they won the second tier title in Senegal and played a key role when they were crowned Premier League champions in 2011.

Niasse was fed up that his stay at Everton did not turn out to be a major success, but he has built a reputation as a fighter and has an inner belief that he will be a success at the top level in Britain.

He found life difficult in Moscow. He didn’t know anybody, could not speak Russian and faced temperature of minus 15C.

Yet he was voted Russian Premier League’s player of 2015, scored 16 goals in all competitions and added assists which ran into double figures.

At his best Niasse has strength and explosive pace. The more he plays the better chance he has to produce at his impressive best.

“I knew Cardiff was the right move for me,” said Niasse, who wears number 29 and is the second Senegalese international to play for the Bluebirds after Armand Traore.

“Other clubs were interested, but I was convinced that this was where I wanted to come.”

He scored a total of eight Premier goals for Everton, while he has netted three times in nine international appearances for Senegal.

Two of those goals for the Toffees came against Bournemouth – and how he’d love to add to those when the Cherries, fresh from a 4-0 win against Chelsea in midweek, come to South Wales this weekend.

Three promising young Bluebirds defenders have gone out on loan this month.

Brown, aged 21, was an unused substitute for Livingston against St Johnstone in Perth.

“Ciaron is a centre half who likes to defend first,” said Livi manager Gary Holt.

“He comes highly recommended and we are delighted he has choose to come up to Livingston to enhance his development.”

The McKay twins, Paul and Jack, are the 22-year-old sons of football agent Willie and joined Cardiff from Leeds United.

While Paul has headed to Scotland, Jack remains in Cardiff’s under-23 development team.

Morecambe manager Jim Bentley said: “Paul is currently playing for Cardiff Under-23s, but has played for Leeds United and Doncaster Rovers and been in their first team squads.

“Cardiff manager Neil Warnock rates him highly and I know people who have coached him and also recommend him.

“He grew up playing with Liam Mandeville at Doncaster so knows him well and he looks set to be a good addition to the squad.”

Wales youth international Bodenham, a 19-year-old born in Newport and raised in Cwmbrân.

The young Bluebirds are top of the Professional Under-18 Development League, three points ahead of Ipswich Town with a game in hand, and are through to Welsh Youth Cup quarter-finals.

Wrexham-born Daniel Griffiths, a Wales under-19 international who joined the Bluebirds from Liverpool this year, scored a hat-trick in Cardiff City’s 11-0 WYC third round win at Taffs Well.